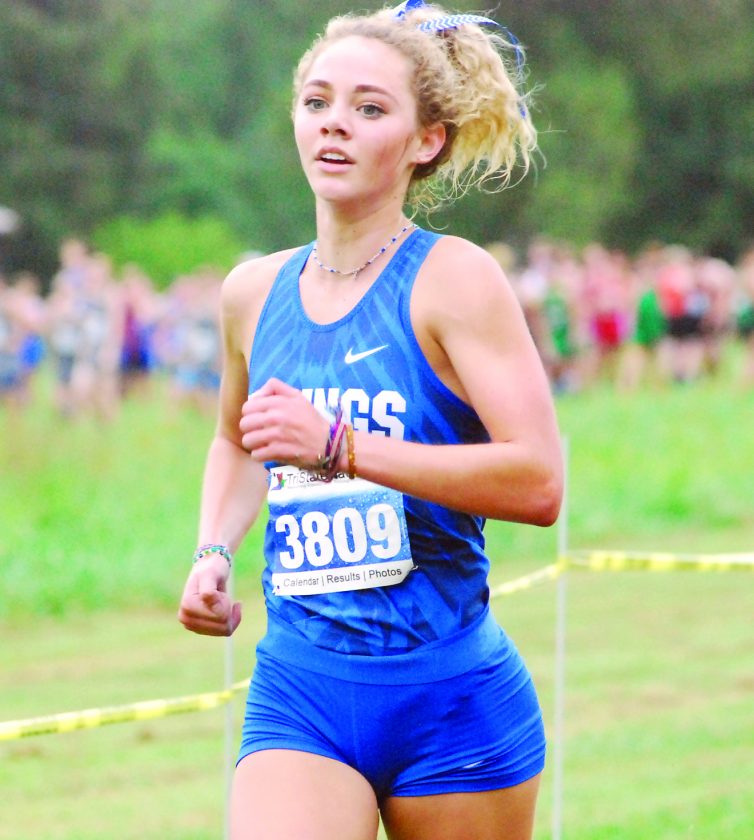 MINERAL WELLS — On an overcast Saturday morning at the 4H campgrounds in Mineral Wells, a pair of 5K races set in motion a chance for local runners to impress at the 20th Chick-fil-A Invitational. The much-lauded event featured runners in the boys’ and girls’ high school races who are quickly finding their footing for the 2019 season.

Three is a magic number, and no one knows that better than Ripley’s Tori Starcher. She impressed by winning the girls’ race at the Chick-fil-A for the third consecutive year. Her triumph in 17 minutes, 43.8 seconds was more than a minute faster than Williamstown’s Ella Hesson (19:06.5). After her win, Starcher talked about the race and what she expects out of herself.

“Well, I knew there were going to be good conditions out there. It was really cool and overcast,” the Viking senior said. “I was wanting to come out here and get a super-fast time. I wasn’t super-pleased with it, but it’s kind of hard running solo. I’m so blessed to be able to come out here and win this event for the third year in a row, so it’s exciting.”

Her efforts helped the Ripley girls to a fifth place team score, as teammate Haleigh McCune finished 11th at 20:51.4.

The Williamstown girls had another strong showing, and Hesson’s runner-up finish was a big reason for it. Two more Yellowjackets (Natalie Sawin in seventh at 20:10.2 and Chloe Lightfritz in 10th at 20:31.6) stood out as big contributors to a second place team score behind Winfield.

The Parkersburg girls placed sixth with Allie Felker’s 22nd place finish of 21:15.3 leading the way. Caldwell achieved a ninth place result behind Chloe McAuley’s 33rd place finish in 21:37.4. Other local girls’ teams finishing outside the top 10 were bunched up with the rest of the pack. Doddridge County finished 11th, Warren came in right behind at 12, and its Ohio counterpart in Marietta rounded out the top 15. Ritchie County and Tyler Consolidated came in 16th and 17th, respectively. Parkersburg South finished out the girls’ scoring for local teams in 19th.

The boys’ side saw tighter finishes and local runners vying for every position available. Fairmont Senior’s Ethan Kincell pulled away from Doddridge County’s Carter Lipscomb (15:50.5) and won by seven seconds in 15:43.6. Despite the runner-up finish, Lipscomb and the Bulldogs pulled out a fifth place finish in the team scoring.

Parkersburg South’s highest finisher on the day was Cameron Marks, as he crossed the finish line in eighth at 16:31.6. His finish led the Patriots to finish right behind Doddridge County in the six spot.

Meanwhile, crosstown rival Parkersburg had two runners score top 10 finishes. Sophomore Franklin Angelos saw a personal-best time at the course in fourth place with a time of 16:13.5. Junior Keegan Barnette narrowly missed his pace and rounded out the top 10 at 16:35.1. Together, they helped the Big Red boys to a 10th place finish overall, and they spoke about what it will take to be even more successful in the future.

“You’ve just got to keep grinding,” Barnette said. “This is just one of the first races. We’re going to keep working and improving. We have one that didn’t finish today, and we need to get him healthy.”

Angelos expanded on that point, and he hopes health can yield results and pay big dividends for the Big Reds.

“We were missing one of our freshmen,” he said. “He would have brought us up a couple. We just lost a lot of guys, and we have a lot of new guys filling in roles. They’ve just got to get used to it.”

Back in the top 10, Ritchie County continued the log jam of local teams with a seventh place showing. Kent Bee continued his solid senior campaign with a 16:52.8 time and subsequent 17th place finish.Warren’s Brennan Perdue led his team with a 17:12.1 mark in 22nd place. The Warriors finished behind Ritchie County and George Washington in ninth.

Caldwell’s Mason Ackley came in 15th in 16:41, as he led his team to a spot shy of a top ten finish. Tyler Consolidated’s Spencer Corley finished just outside the top ten in 16:35.4, as the Silver Knights ended the day in 13th. The rest of the local field lived up to that earlier billing of tight finishes, since many teams jockeyed late for spots. Ravenswood edged out both Williamstown and Ripley in 17th, as the ‘Jackets and Vikings finished in 18th and 19th, respectively. Marietta claimed 21st over Wirt County, which finished behind the Ohio school in 22nd. Roane County finished things up for the local boys’ teams in 24th.