’Jackets bounce back in big way 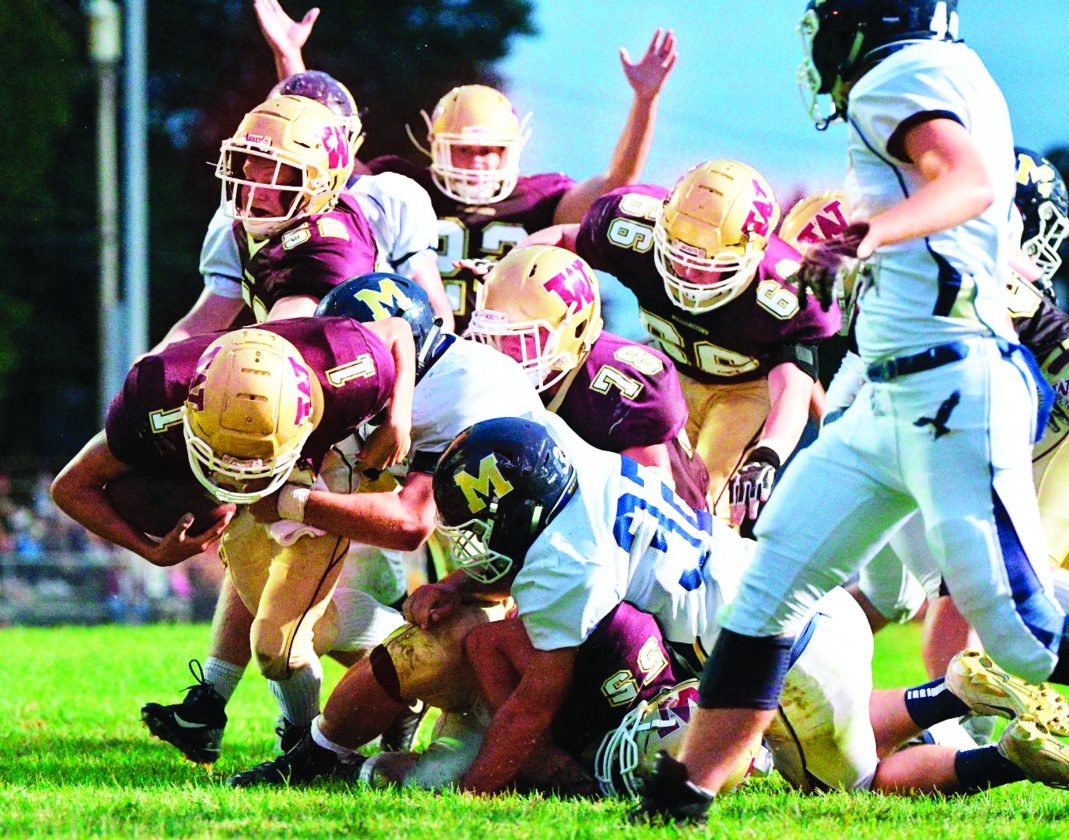 Photo by Neal Smith Williamstown’s Brayden Modesitt (1) powers his way into the end zone through Magnolia defenders during the Yellowjackets’ 27-0 win over the Blue Eagles Friday evening in Williamstown. Modesitt’s teammate Nick Bondi (22) signals the score with his hands raised in the background.

WILLIAMSTOWN — For the first time in more than four decades, Magnolia suffered a season-opening shutout as the Blue Eagle offense never got untracked here Friday night, falling 27-0 to host Williamstown.

The 1-1 Yellowjackets of head coach Terry Smith, who play at Marietta next Friday, led 14-0 after one and 21-0 at intermission as the Blue Eagles were held without a first down until their opening drive of the second half.

WHS got the only score it ended up needing at 2:57 of the first when Brayden Modesitt connected with Mason Deem for a 30-yard touchdown pass. Isaac Joy’s extra point made it 7-0.

On the next ‘Jacket possession, Eric Brown hauled in a 19-yard slant pass on first down to get things going. Modesitt, who was 12 of 13 for 164 yards in the first half, then found an open Nick Bondi, who hauled in the aerial, made a spin move around the 5 and waltzed into the end zone for a 14-0 cushion following Joy’s boot with 16.9 ticks left in the first.

Despite having minus 6 yards on a trio of three-and-outs, Magnolia nearly got a first down on its fourth drive. However, head coach Dave Chapman watched quarterback Caden Cisar’s pass to Silas McKeever get broken up by Logan Richards.

WHS ended up losing a fumble on its ensuing drive when Deem caught a pass, but was stripped by McKeever. Facing a fourth-and-3 at the WHS 39, Cisar’s pass fell incomplete as ‘Jacket Josh Ingram knocked it down at the line of scrimmage.

A 26-yard pass down the sideline to Bondi allowed the hosts to convert a third-and-13 at the Blue Eagle 40. Three plays later, Modesitt bulled in from the 4 and it was 21-0 with 2:10 remaining in the half.

“Obviously, our defense is good. I’d like to see our offense do better,” said coach Smith, whose squad tacked on their final TD via a 26-yard strike with 2:13 left in the third from Modesitt to Deem, who had five grabs for 67 yards.

“(Mike) Hamrick just dominated the line up front there. He’s so big. It seems like we’d like to do better on offense, who wouldn’t? We’ll take it. It’s Magnolia and we don’t beat Magnolia very often.”

Williamstown relied more on its running attack after the break as Jarrett Frazier finished with game-highs of 21 rushes for 91 yards. ‘Jacket backfield mate Ty Moore toted 15 times for 41 stripes. Modesitt finished 14 of 17 for 197 yards. Brown (4-49) and Bondi (5-81) had the other WHS receptions.

“Sometimes the other team has a lot to do with how you look,” admitted Chapman after the game, which was the first time MHS had a season-opening loss via shutout since a 3-0 setback in 1978 to John Marshall at Monarch Stadium.

“The longer I get into coaching, I don’t blame this, this or that. Sometimes you are playing a quality opponent. They got a nice team and are just dominate up front, but Hamrick has worked his butt off and to watch the effort he kept giving.”

The Blue Eagles amassed just a pair of first downs and lost the total yards battle, 340-43. On the ground, Magnolia had 19 attempts for minus 7 stripes.

Cisar finished 5 of 17 for 50 yards and Jason Beisel led the rushers with 11 attempts for 28 yards.