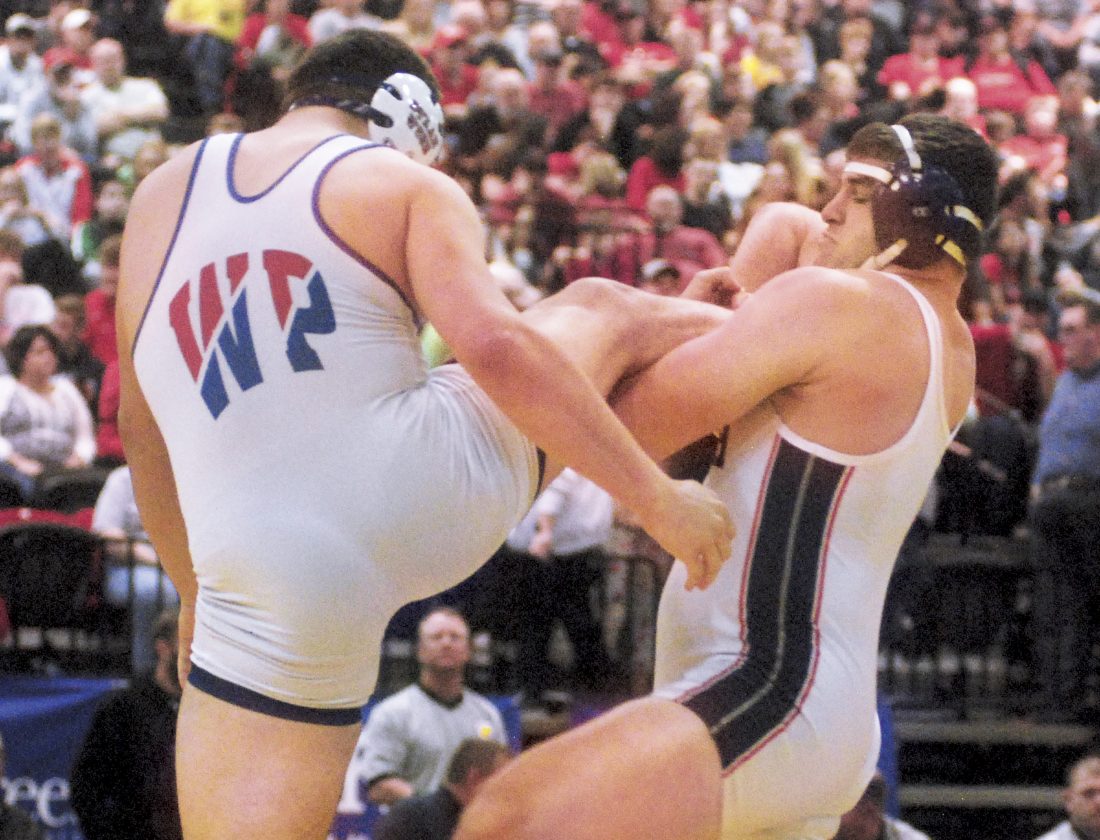 PARKERSBURG — The city of Parkersburg is no stranger to high school wrestlers moving on to the next level, and Parkersburg South’s Braxton Amos is the next one taking his wrestling career up a notch. Before Friday’s home football game, he announced via the video screen his commitment to the University of Wisconsin. The decision for the 220-pounder came after a lengthy process of weighing his options, and not a lot of people actually knew about his decision beforehand.

“You know, it was awesome,” Amos said of his message to the crowd at the Erickson All-Sports Facility. “I told some coaches at Wisconsin I was signing, and I told my mom and dad. Other than that, I didn’t tell a lot of people.”

Speaking of those other options, Amos took to social media on April 1 to narrow his choices down to just five schools: Penn State, Oklahoma State, Ohio State, Virginia Tech and Wisconsin.

The multi-time state and national champion grappler is staying busy in the months before his senior year of wrestling begins, as he decided to see how his skills would transfer over to the gridiron as a defensive lineman. First-year football coach Nathan Tanner likes what he has in Amos, as the team is off to a 3-0 start. That’s thanks, in part, to Amos. In his first game of varsity football on Friday, he tallied three sacks and a fumble recovery.

“I mean, Braxton, he’s a world-class athlete,” Tanner said after Friday’s win. “He’s the number one wrestler in the country. We’re all so proud of the kid. He’s a great kid, and I can’t say enough about him. For him to come out and decide to play football and just have fun with his buddies, that’s a really cool thing.”

The choice to play football was one Amos made not to be able to warm up for wrestling, bit it was one he made to represent his school.

“I didn’t play football to warm up for wrestling,” he said. “I did it to play with my friends. I did it for my school. Our defense is much more than our front three. We’ve got great cornerbacks like Brandon Penn and (John) Kinnaird.”

Amos is ranked number one in the nation at 220 pounds and is the number two pound-for-pound grappler overall. Those rankings came from hard work and a willingness to learn under South head mat man, Shaun Smith. The Patriots have run roughshod over the Class AAA wrestling scene, winning five consecutive titles. Amos has won two individual state crowns, and in those two seasons, he was undefeated and offensively un-scored upon. Earlier this year, Amos was named the first Dutton Award winner (given to the most outstanding wrestler in the state) as an underclassman. All that determination from Amos is what Smith says will help him succeed in Madison.

“I think it’s awesome. He’s had a lot of very good opportunities and options to choose from,” Smith said of Amos’s commitment. “I’m sure it’s probably pretty taxing. It’s a lot of pressure from every direction to make a decision. I think he made a great decision, and I’m sure he’s going to be very successful there.”

It can be easy to forget there’s one more year of Amos in high school, and Amos says he wants to improve on the national stage before heading up north. Coach Smith said he expects more of the same from Amos and talked about his legacy in a Parkersburg South singlet.

“I think it’s pretty safe to say that he’s going to be the most decorated wrestler to ever go through South and probably beyond,” Smith said. “It’s hard to argue that he’s not the best wrestler to put on a South singlet. I don’t want to put any more pressure on him than there already is, but that’s just the reality of it.”

Academically, Amos has also been weighing options there. While he has not made a final choice in what he’s majoring in, he narrowed it down to engineering and accounting.

Amos means a lot to the Parkersburg South wrestling program, and after his senior year is done, he’ll put on the red and white of Wisconsin in hopes of continuing his already storied run as one of the nation’s top mat technicians.