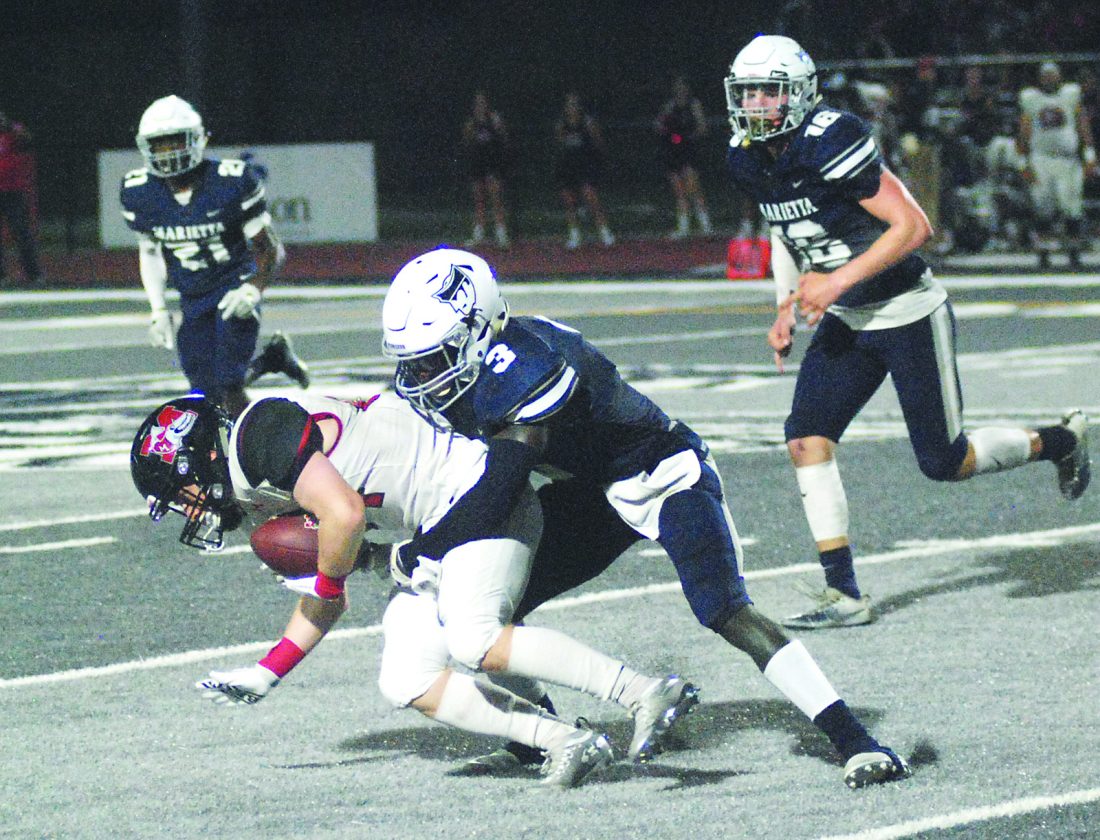 MARIETTA — Marietta College got a wakeup call when it fell into an early 9-0 hole against rival Muskingum Saturday night at Don Drumm Stadium.

After two blowout wins to start the season, this was the Pioneers’ first bout with in-game adversity, and they responded with flying colors. Marietta scored the game’s next 23 points and held on for a 31-25 victory to retain the Shrine Trophy for the third straight year.

Marietta (3-0, 2-0 Ohio Athletic Conference) was led by the running of Tanner Clark, who donned the No. 38 in honor of late teammate Joel Wunnenberg. Clark was a workhorse, finishing with 214 yards on 39 carries. His touchdown runs of 2 and 4 yards in the second quarter put Marietta up 13-9, a lead they never relinquished despite things getting interesting at the end.

The first quarter was all Muskies.

Muskingum (1-2, 0-2 OAC) got a 38-yard field goal from Gavin Costello to open the scoring. On Marietta’s ensuing possession, Willie Smith read a screen pass perfectly and intercepted it in stride for a 65-yard touchdown. Marietta blocked the extra-point kick to make the score 9-0.

The early deficit seemed to kick the Pioneers into gear, taking a nine-play, 55-yard drive into the end zone, capped by Clark’s 2-yard run, to cut it to 9-6 with 9:59 left in the second quarter.

A big swing of momentum occurred on the ensuing kickoff. Bernard Johnson dropped the kick and was unable to gather it before Marietta piled onto the ball at the 4-yard line. One play later, Clark ran in his second touchdown to make it 13-9, giving Marietta 13 points in just 14 game seconds.

The Pioneers closed the half with a 25-yard field goal from Jacob Griffin, set up by Kyle McSweeney’s 49-yard pass to Gage Giovengo, to make it 16-9 at halftime.

Marietta got the ball first to open the second half and executed a 7-play, 66-yard drive that resulted in Clark’s third touchdown, a 1-yarder, to make it 23-9. The big play on the drive was a 49-yard connection from McSweeney to Andrew Barker.

McSweeney finished 8 for 14 for 129 yards through the air.

The Muskies answered with three points on their next possesion, driving all the way to Marietta’s 11-yard line before stalling and settling for a 28-yard field goal by Costello.

Muskingum rode that momentum into the fourth quarter, keeping Marietta off the scoreboard and cashing in on a 24-yard touchdown pass from Jordan Garrett to Darius Hayes-Carruth. The two-point try failed, making the score 23-18 with 9:50 remaining.

A quick three-and-out by Marietta, capped by Tim Ousley and Drew Lowery’s sack of McSweeney, resulted in good field position for Muskingum at Marietta’s 38-yard line. However, Marietta’s defense rose to the occassion and forced an incomplete pass on fourth down to get the ball back with six minutes left.

McSweeney passed to Justin Bell for the two-point conversion to make it 31-18 with 4:35 left in the game.

Muskingum needed to respond quickly and did. Johnson had a run of 14 yards and a catch for 12 yards before Hahn rushed for 15 yards to Marietta’s 27. Hahn then passed to Hayes-Carruth for 10 yards before throwing a fade to Patrick Eanes for a 17-yard touchdown to make it 31-25 with 2:53 left.

Marietta got a first down on its next drive and was able to chew the clock down to 18 seconds before Muskingum got the ball back at its own 20.

With no timeouts, Hahn completed a pass to Hayes-Carruth to the 42, but Ian Kouba delivered a big hit in bounds and Muskingum was unable to run another play before time expired.

Johnson finished with 72 yards on 16 carries while Hahn had 13 rushes for 69 yards and was 14 for 29 for 189 yards passing. Tyler Heinecke was his top target, hauling in four receptions for 100 yards.

Muskingum outgained the Pioneers 440-342 in the game, but Marietta won the turnover battle (2-0) and committed only 30 yards of penalties to the Muskies’ 115.

The Pioneers will enjoy a bye week before returning to the field on Oct. 5, when they visit Ohio Northern in another OAC showdown.