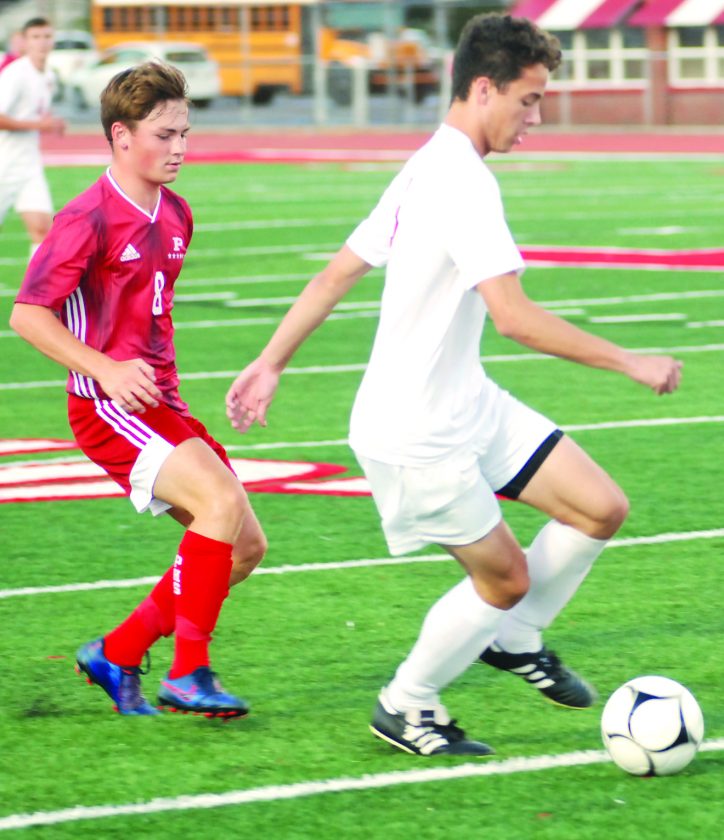 PARKERSBURG — Marietta Tigers’ senior forwards Ryan Mannix and Ethan Feathers both found the back of the net three times, combining for six out of the teams eight goals. And the Tigers handed the Parkersburg Big Reds a 8-0 setback and improved to 6-0 on the season Thursday night at Stadium Field.

Scoring a Marietta school record six goals in the Tigers 11-0 win versus Coshocton on Tuesday, Mannix now has recorded back-to-back games with hat tricks, scoring in the 25th, 35th and 50th minute. Mannix also collected an assist eight minutes later, drawing the attention of the Big Red defenders on the left side of the box.

Mannix found an open senior Cade Gandor, as Gandor got past Big Red keeper Caleb Thomas to extend the Tiger lead to 6-0 in the 58th minute.

Joining Mannix was Feathers with three goals of his own, only scoring one goal in the first half, Feathers scored two goals in rapid fire.

Receiving a cross from Jake Craven, Feathers timed his slide right, stabbing the ball with his right foot. As the ball was going right to the post, Parkersburg keeper Thomas made the diving stop with his right hand, but the ball took a Tiger bounce landing behind the line.

Feathers collected his third goal a minute later, caplitzing on a Big Red penalty occurring inside the box, sending the penalty shot right down the middle. Scoring the games final goal at the 66th minute.

“I thought we were about as good as we’ve ever been tonight. We’ve been building for this with this group for, you know, two or three years now. We knew we had a special, special senior class and the guys that have come in behind is just as talented. So we really have been working for this,” Marietta head coach Todd Morris said. “They’ve accepted the challenge and they are reaping the benefits of their hard work and the trust in the system. That’s what we’re trying to run, as you can see. We are a attacking team and we’re trying to get guys forward. We like where we are right now.”

Craven got the first goal on the board at the 20 minute mark, scoring off a nice cross from a free kick from senior Sean Fournier.

The Big Reds (1-2-1) didn’t have an answer on the offense side, not being able to move the ball up and down the field with much luck, only having three shots on target the entire game.

PHS showed signs of an attack at the 34 minute mark, passing the ball around the middle of the field, before senior Brendan Whitlatch’s shot from outside the box was pulled in by Tiger keeper Justin LaBarre.

“Marietta was so good. I just love to watch them play. I was enjoying them playing. I was really disappointed in our team tonight, we just didn’t do the basic things well, but you gotta give Marietta all the credit,” Big Red coach Don Fosselman said. “They get all the credit in the world. You know, if they were in the state of West Virginia, they’d be state champions. They were very good, they put a whopping on us that’s for sure.”