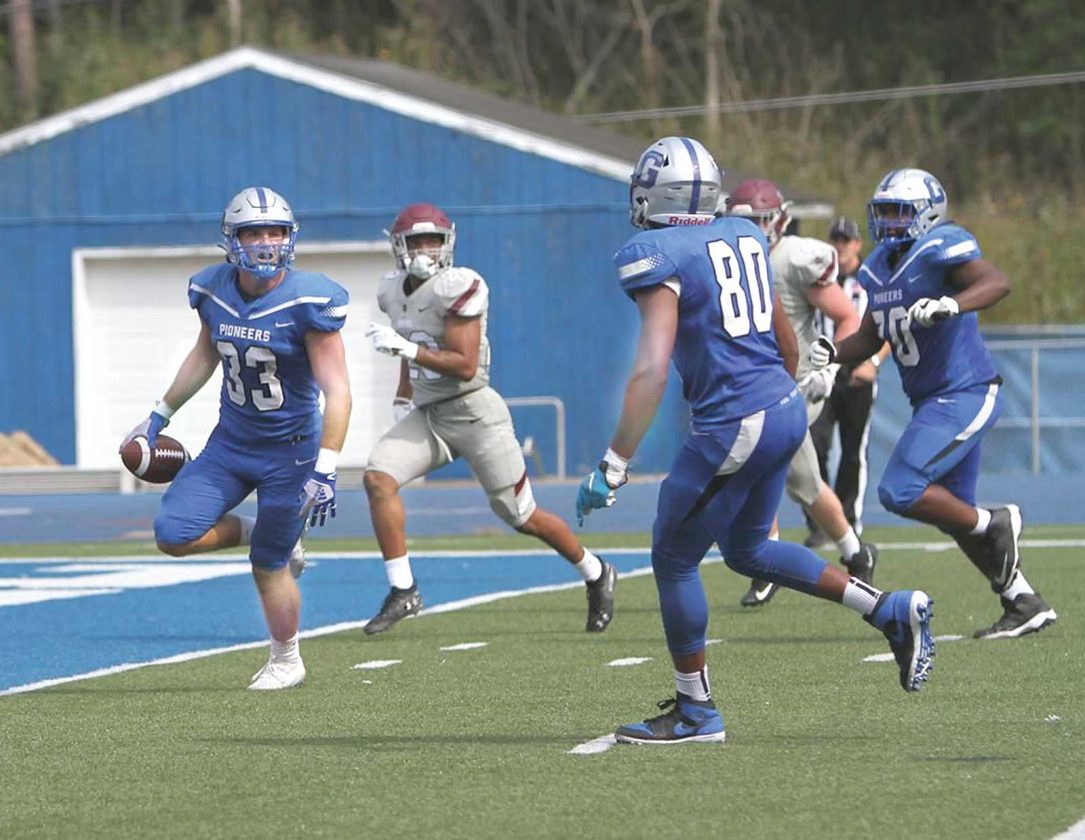 The Pioneers (2-1, 1-1) were driving late in the fourth quarter to go ahead by two possessions, but a lost fumble resulted in an 81-yard TD return by Imani Moore to tie the game at 20 with 4:24 to go.

Although Justin Watts, who drilled a 48-yard field goal early in the second to make it a 3-3 affair, failed to convert a 37-yarder with 49 ticks left in regulation, head coach Mike Kellar’s squad got it done in overtime.

Austin Ratliff, the former Gilmer County prep standout, took a screen pass from Tim Heltzel on the first play in overtime, broke a couple of tackles and raced in for a touchdown.

The G-men, who return to action 7 p.m. Thursday at West Liberty, had their first two turnovers of the season.

Heltzel finished 28 of 38 for 333 yards. His 19-yard TD pass to Edward Webber with 2:42 left in the second quarter tied the game 10-all at halftime. Concord’s Derek Kincaid had scored earlier in the period on a 10-yard TD run.

Javon Butler (6-61) hauled in a 46-yard touchdown strike from Heltzel early in the third.

Ratliff finished with eight catches for a game-high 126 yards. Mario Pender led the ground attack with 58 yards on 19 attempts.

ATHENS, Ohio (AP) — Elijah Mitchell rushed for 143 yards and three touchdowns as Louisiana-Lafayette won its third straight game, holding on to get past Ohio 45-25 on Saturday afternoon.

The Ragin’ Cajuns held a 10-6 lead at the half and extended that to 31-12 early in the fourth before Ohio rallied to score twice on just four plays and close to 31-25 with 7:54 remaining in the game.

Ohio’s Jarren Hampton recovered a fumble on Louisiana-Lafayette’s 28. Two plays later Ja’Vahri Portis bulled across from the 3. Following Louisiana-Lafayette’s missed field goal attempt on the next series, Nathan Rouke nailed Shane Hooks on a 49-yard completion to ULL’s 21. Rouke and Hooks connected on the next play for a score to move within six of tying the game with 7:54 remaining.

The Ragin’ Cajuns responded with two quick scores to put the game out of reach.

Levi Lewis threw for 188 yards and two scores for the Ragin’ Cajuns (3-1) who won their first away game this season. ULL fell to Mississippi State 38-28 in the season opener.

Rourke threw for 277 yards and a touchdown for Ohio (1-3) which lost its third straight after opening the season with a 41-20 win over Rhode Island.