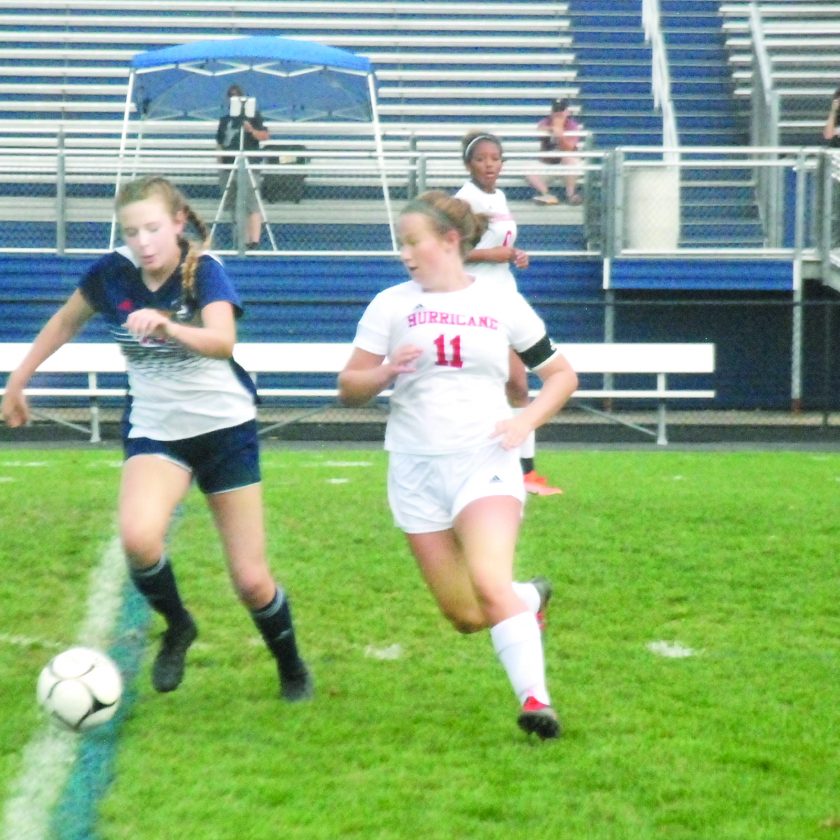 PARKERSBURG — A Saturday trip for the defending Class AAA state champion Hurricane Redskins to the Erickson All-Sports Facility was a successful one, as they ran through Parkersburg South, 5-0.

Both teams were headed in opposite directions, as South was coming off a tie against Ripley and Hurricane continued its undefeated season with a win over Woodrow Wilson. This match was no different, as Hurricane’s defense limited South’s scoring opportunities when they were needed the most.

The Redskins struck early and often on goalkeeper Kendal Mader, as she stayed on her toes throughout the contest. Early shots from Bailey Fisher missed the mark in the first couple minutes, but Lauren Dye found the back of the net off an assist from Dani Ray. That shot sailed from the left baseline to the top-right corner just off Mader’s fingertips for the first score of the match.

A couple minutes later, Ray found Dye again for a goal to make the score 2-0. As the 2-0 total held to be the score at halftime, PSHS head coach Ron Bucholtz praised his team’s first-half intensity. However, the second half was when the ‘Skins finally started to pull away.

Hurricane’s Fisher finally got shots to go her way in half number two with a hat trick. Her first goal came unassisted in the 49th minute after her shot was initially stuffed by Mader.

Even though the South goalie stopped the ball’s progress, it ricocheted off her and trickled to the back of the net for Fisher’s first score.

Scores in the 67th and 69th minutes put the game away, as the Patriots (5-4-1) have work to do ahead of their OVAC quarterfinal match at 7 p.m. on the road Tuesday against University.

“Well, the girls played with better intensity, and we possessed the the ball better than we thought we would,” coach Bucholtz said. “They’re (Hurricane) a good, talented team. They took advantage of our mistakes. We would turn the ball over, and that would do it for our offense.”

The beat goes on for the Redskins (11-0-0), as they have only allowed one goal in all of this season. In total, they’ve outscored opponents in a big way. A staggering 64-1 score through 11 contests has them on a collision course for big things as the regular season chugs along, and coach Shelly Moore credits her defense for getting her team this far. The only shot on goal for the Patriots came from Karleigh Dowler. The slow-roller was stopped by a sliding Abby Fowler in the second half. That defensive awareness is what Moore hopes will serve her team well, later in the season.