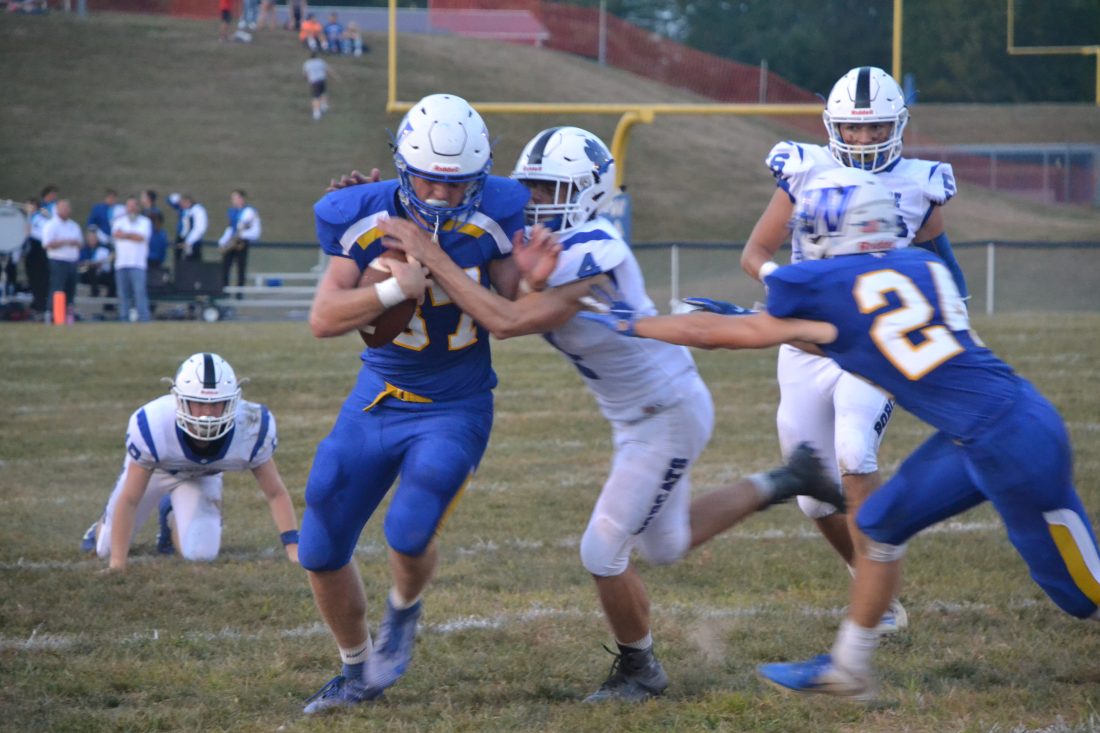 Austin Craven had Tyler’s only other score, a 56-yard touchdown run with 5:01 left in the game.

Calhoun trailed just 24-16 in the final minutes of the first half, but Rucker’s 50-yard TD catch from Huffman as time expired in the second quarter made it 30-16 at the break.

It was all Knights from there as they scored the game’s next 22 points to pull away.

Calhoun got three touchdown runs from Adam Parsons, who finished with 67 yards on 12 carries. Travis Richards led the way on the ground with 177 yards on 29 carries, two going for scores. Mason Bailey added 99 yards on seven rushes and had a 33-yard catch for the now 1-3 Red Devils, who play host to St. Marys next Friday.

Rucker led all receivers with 63 yards on three receptions.

NEW MARTINSVILLE — Visiting River jumped out to a hot start, scoring the game’s first 34 points en route to a 34-14 win over Magnolia Friday.

The Blue Eagles got late touchdowns in the fourth quarter on a 29-yard run by James Stillwagoner and a 37-yard run by Jason Beisel. Beisel led the team with 88 yards on the ground.

Carter Dennis led River with three touchdowns coming on runs of 1, 45 and 40 yards.

Magnolia looks to rebound next Friday at Frontier.

VINCENT — Cambridge quarterback Cody Moore passed for two touchdowns and ran for two more Friday night to lead the visiting Bobcats to a 42-23 win over the Warren Warriors.

The Bobcats scored 21 unanswered points in the second half to erase a 23-21 Warren lead at halftime.

Moore’s 4-yard touchdown run in the third quarter gave Cambridge the lead and TraVon Jeffrey’s 55-yard sprint on the first play of the fourth quarter proved to be the dagger as CHS improved to 2-2 on the season.

Taylor completed 34 of 53 pass attempts in the game for 338 yards while being picked off three times by the Bobcat defense.

Gandee and Miller each eclipsed the 100-yard mark in receiving yards for the 2-2 Warriors while Joel Chevalier booted a 42-yard field goal as the first half expired to give Warren a 23-20 lead.

Jeffrey rushed for a game-high 150 yards on 26 carries while Moore completed 9 of 15 passes for 146 yards while carrying the ball seven times for 77.

BELPRE — Belpre ran for 409 yards as a team as the Golden Eagles cruised to a 49-22 win over Wahama Friday.

The Golden Eagles (2-2) were led by Nick Godfrey’s three touchdowns. Godfrey carried five times for 89 yards. Logan Adams led the team with 107 yards on just seven carries with a score. Jeremiah Weaver added 101 yards and a TD on seven rushes.

Connor Baker completed 4 of 7 passes for 56 yards and an 18-yard touchdown pass to Walker Feick.

Belpre dominated, taking a 42-0 lead into halftime. The Golden Eagles travel to Southern next Friday.

CAMERON — Noah Barnhart rushed for 109 yards and three touchdowns on 22 carries to help Frontier pull away for a 33-20 victory over host Cameron Friday night.

The Cougars are off to a perfect 4-0 start with a home matchup against Magnolia next Friday on deck.

Joel Lewis, who finished with 70 yards on 15 carries, got the scoring started with a 9-yard TD run at the 8:20 mark in the first quarter.

Back-to-back touchdowns by Cameron put the Dragons up 14-7, but Barnhart scored on runs of 29 and 1 to take a 21-14 halftime lead.

Barnhart also scored from 2 yards out in the third quarter before J.D. Schmidt’s 1-yard TD carry with 4:20 left in the game sealed the deal.

The Eagles (2-2) trailed 18-7 entering the fourth, but Steven Fitzgerald had a 3-yard TD run and Blake Newland’s 20-yard score with 1:12 left in the contest looked like it would be the game-winner.

Waterford, now 3-1 with a home game at 7:30 p.m. Friday versus Miller, got on the board first when Cole Miller returned a blocked punt 20 yards.

Fitzgerald answered with a 1-yard TD burst and Mason DiShong’s PAT gave the hosts a 7-6 cushion early in the second.

However, WHS added two more TDs before the break. The first was a Holden Dailey 25-yard TD run. Fouss also had a 47-yard TD catch with no time left in the half.