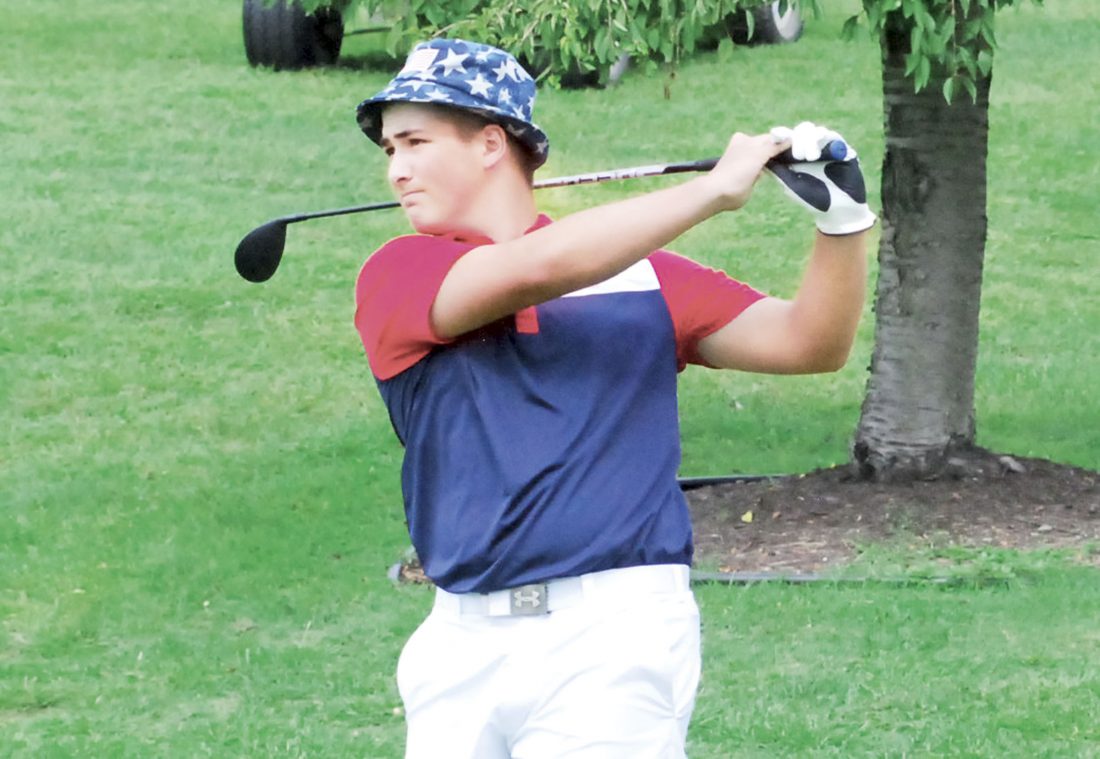 Photo by Josh Hughes Parkersburg South’s Blake Snyder tees off during his City Cup match with Parkersburg’s Hayden Leavitt Friday at Parkersburg Country Club. Snyder won his match 6 and 4 as the Patriots retained the city cup.

VIENNA– It was a beautiful day to renew a rivalry, as the Parkersburg and Parkersburg South golf teams battled on Wednesday at the Parkersburg Country Club to see who would take home the City Cup trophy. Eight golfers on each team were put in pairings in order to duke it out, and the team with the most individual wins gets the Cup. However, the Patriots only needed four individual wins in the match play format to retain, since they won in 2018.

That’s exactly what they did to retain. Four South victories were on the board before the top two matches were decided, as the Patriots took the cup home to Blizzard Drive for the second year in a row.

A Daniel Wharton (5 and 4) win over Cade Murray cut into the deficit, that was then expanded by another Patriot win. Austin Reeves (8 and 7) finished off PHS’s Logan King, so that meant the Big Reds would need something big to happen.

In stepped Anna Earl (4 and 2), as she defeated Eli Reeves to keep hopes of a full comeback alive for a moment. Then, the last domino fell for the Patriots, as they clinched the Cup.

PSHS’s depth showed when it was Blake Snyder (6 and 4) who beat Hayden Leavitt to minimize the Big Reds’ chances of leaving the PCC with hardware in tow. Snyder talked about his game and how he was able to top the PHS freshman by building an early advantage in the matchup.

“It went pretty well,” Snyder said of his result. “I started off strong, but towards the end, I kind of fell off. I still finished a couple strokes up, though.”

The Big Reds could still play for pride, as Nicole Lincicome and Molly McLean were in tightly-contested matches later in the day. Lincicome (5 and 4) bested Dustin Corley in the second-to-last finish of the day, and she raced over to the 16th green to see her if her teammate could finish the deal and down Zach Redmon.

McLean (3 and 2) did seal the deal by downing a putt from a few feet away to secure the tie. When the ball found the bottom of the cup, Lincicome raised her arms and let out a loud “Yes!” before rushing over to greet McLean with a hug. After all was said and done, the 4-4 tie was quite the improvement for coach Don Snider’s Big Red golfers. In 2018, his team fell 5.5.-2.5 in their defense of the City Cup. This improvement gave him a lot to praise at the end of the day.

“(Parkersburg South) probably has more depth than we do. They’re better than us eight-deep, right now. Right now,” Snider reiterated. “We fought hard. We just have a lot of inexperience. To be able to tie, that was fantastic. We don’t win the Cup back, unfortunately, but I thought we were wonderful.”

Patriot head man BJ Hess was proud of his team’s effort, as they hoisted the City Cup high. He saw full performances from a large portion of his squad.

“That’s cool. That’ll work. That’s fun,” Hess said of the tie. “My number 8 and number 7 guys played really well. Some of the other guys like Mace Busch have been playing really well. It was good to get out there and watch them play well.”