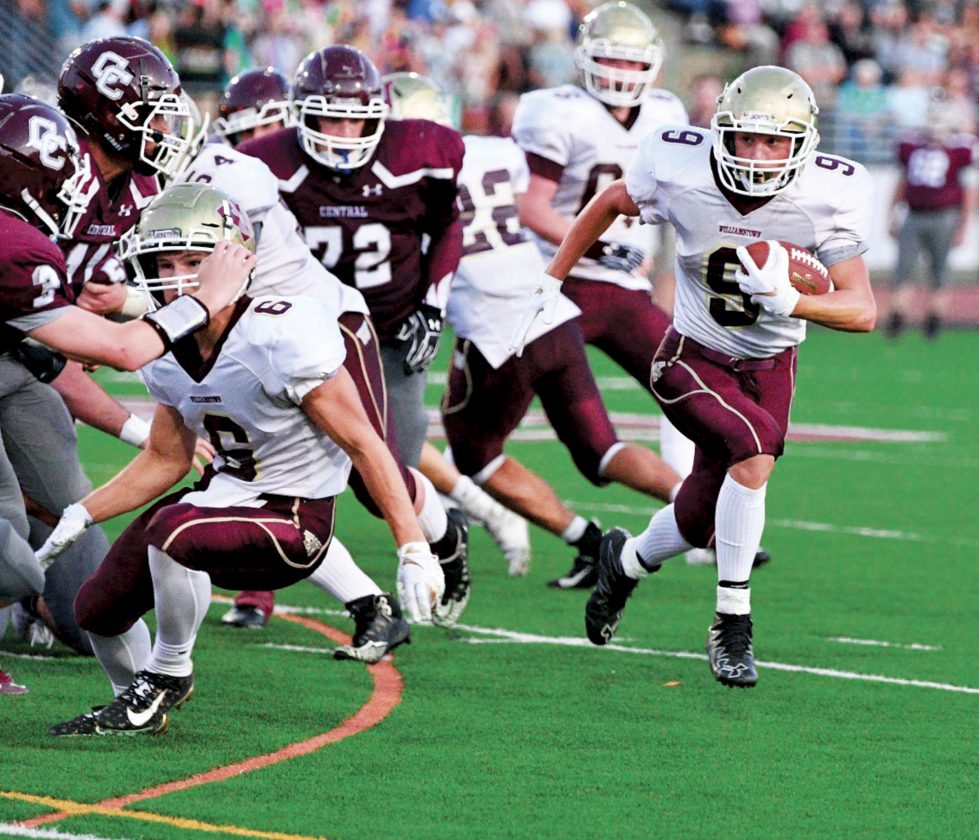 Photo by Neal Smith Williamstown’s Jarrett Frazier runs off tackle during a play in the Yellowjackets’ 35-13 loss to Wheeling Central last Friday at Wheeling University. Frazier and his teammates look to get in the win column against ‘rival’ Magnolia at 7 p.m. this Friday.

PARKERSBURG — The old adage in football goes teams make the most improvements between Weeks 1 and 2 of the regular season.

Real game action brings to the surface pluses and minuses. Video review adds to the dissection of programs.

Williamstown (0-1) hopes to make a positive jump when Magnolia (0-0) comes to town for a 7 p.m. showdown Friday. Spectators may say the Yellowjackets are ahead of the Blue Eagles. Doc Chapman’s squad opened the season with a bye. Neither coach believes this will play a huge factor in the game.

“Sure it is an advantage to have the game experience,” said WHS head coach Terry Smith, whose team dropped a 34-13 decision to defending Class A state champion Wheeling Central. “But, it wasn’t very good game experience and most of Magnolia’s kids played in junior high, too. Every little bit helps but everybody has played football on the field this week.”

To his point, the Yellowjackets welcome a Blue Eagles’ team eager to build on last year’s trip to the second round of the postseason. Magnolia has upset the ‘Jackets before when it was least expected.

“This is our Game 1 and the kids are geared up to play in a tough environment,” said Chapman.

“And while no one wants to open with a bye I told the kids all summer leading up to this game we have an extra week to prepare.”

Penetrating defense line play from the ‘Jackets against Central was one of the head man’s main concerns. First-year quarterback Caden Cisar won’t make many plays with an experienced line in his face all evening.

“We are not bad up front on the O-line,” said Chapman. “But, I was real impresssed with their (Williamstown’s) front seven. They are big and very athletic and have a lot of veteran guys back from last year’s state runner-up team.”

Neither coach wants to see the Yellowjackets’ defense out on the field for long stretches of time, but for different reasons.

Williamstown’s offense struggled to take advantage of two Central turnovers. Smith’s defense also couldn’t get off the field on third down. Central quarterback Curtis McGhee kept plays alive with his legs. He compiled 360 of the Maroon Knights’ 416 total yards.

Slowing Magnolia’s offensive attack won’t be much easier. Cisar may be new at signal-caller, but the same doesn’t go for backfield and slot weapons Jason Beisel, James Stillwagoner and Silas McKeever.

All, though, must be careful to avoid a turnover-minded Yellowjackets’ squad that produced two takeaways in the opener.

The all-around effort displayed by his team stood as a positive from Smith.

“I think the guys didn’t quit,” he said. “We tried to play as well as we could. The effort was there the more times I go back and look at the video. And it was there from everyone. I think everybody hustled.”

Chapman doesn’t see much changing after the opening kick.

“Normally, whether we are up here or down there it is a pretty good game. Both teams have respect for each other,” he said.