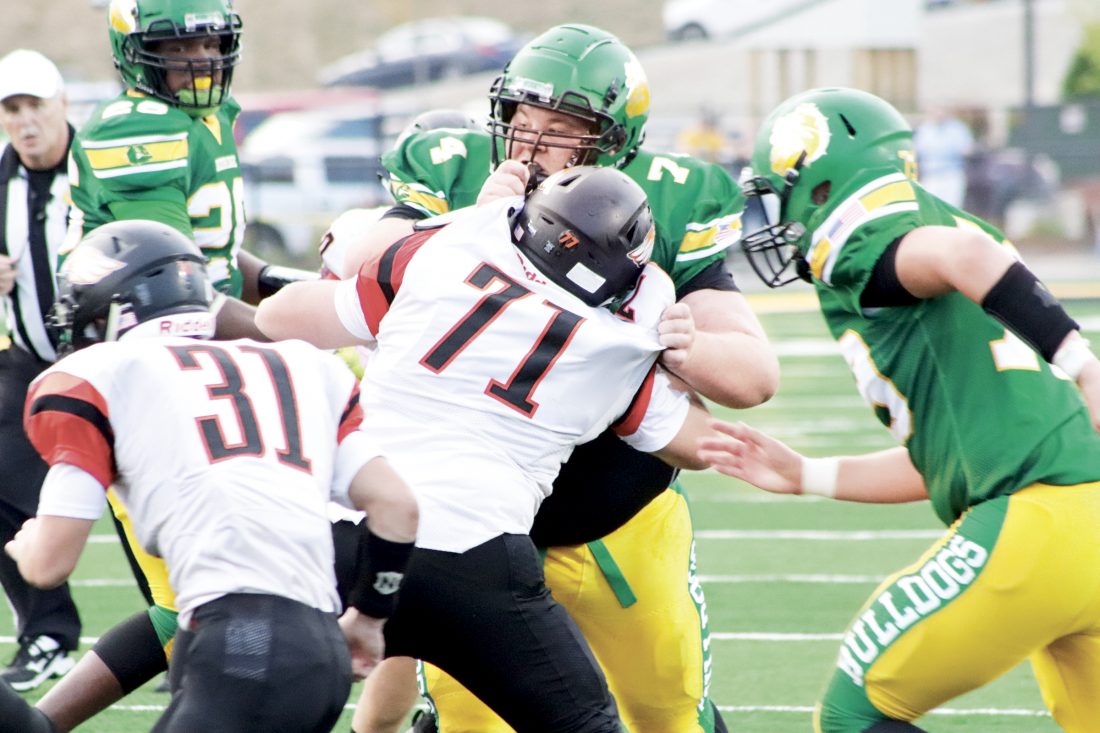 Photo by Joe Albright Doddridge County’s Cole James blows up a South Harrison defender during the Bulldogs’ 49-6 season opening win at the new Cline Stansberry Stadium. James and company are back home after a road game at Tyler Consolidated last Friday. They seek a 3-0 start against Calhoun County at 7 p.m this Friday.

Keys to victory: The real Roane County stood up last week after the return of three key suspended pieces the week before in a loss to St. Marys.

Now, Paul Burdette’s team travels to face the aerial attack of Clay County. Raider cornerbacks need to be on their toes with heads on a swivel to keep the Panthers from completing deep passes and spreading around the ball.

Roane’s ability to counter Clay with an arsenal of deadlier offensive weapons should be the difference after four quarters.

Keys to victory: Catholic head coach Lance Binegar’s line thoroughly preparing for two stout South Harrison trench units is a must if the Crusaders plan on avoiding a two-game losing streak. South Harrison’s lines caused Doddridge County some trouble in the opener. If Binger’s groups aren’t ready, Landon McFadden will do to them what Ritchie’s Garrett Owens and Tre Moss did last week in the running game.

Catholic trailed at halftime of this game last year, but was able to pull it out in the second half. Binegar and company shouldn’t bank on that chance again this season. The Hawks faced two quality opponents to begin the season and were thoroughly bested by both. Chris Underwood’s team wants to halt its skid at just two games.

Keys to victory: Talk about intriguing.

If the Calhoun County that pushed Webster to the limit last week shows up Friday, this game could certainly be interesting.

Then again, if the Red Devils team that struggled against Wirt County chooses to make an appearance, it could be a long night for the visiting team.

Doddridge’s offense hasn’t missed a beat in the opening games of the season and probably won’t Friday night.

Stopping the run remains the most important task for Paul Parsons’ group. If Hunter America and Reese Burnside find open space to run, it is going to be a long night for a defensive unit not the strongest in keeping good opponents out of the end zone.

Keys to victory: Two teams who like to run the football will meet Friday night as host Riverside looks to avenge last year’s 34-30 setback at Death Valley.

Ripley head coach Eddie Smolder’s squad bounced back from a week one loss to Parkersburg South to take care of Buckhannon-Upshur last week.

The Warriors will have a dual-threat QB in Elzy and if the Vikings hope to secure a road win they must be able to contain or at least slow down Easterling and company.

Keys to victory: A year ago at Morris Stadium, the Titans won this game without scoring an offensive touchdown.

The two Little Kanawha Conference rivals are both hoping to improve to 2-1, but the biggest difference in the outcome could be field positions and turnovers.

Wirt County forced 12 turnovers in last week’s victory at Paden City, which included a state record 10 interceptions. Murray had five by himself to tie an individual state mark.

Keys to victory: A not too happy group of Tigers will invade Alumni Field as a pair of one-loss squads will tangle with Shadyside taking on host Magnolia.

Shadyside suffered a second-half letdown on Saturday and was upended by Mogadore. Magnolia played solid defense in its opener, but couldn’t score at Williamstown.

The Tigers won this game big last year and for the Blue Eagles to have a chance at victory No. 1 coach “Doc” Chapman’s squad must establish some sort of running attack and win the turnover battle.

Keys to victory: Something’s got to give in this one. Both Paden City and Van started their respective seasons with two losses to start, but that will change after four quarters in Van.

Both teams have short benches, which means two-way play will come into play early and often.

The Wildcats only have 14 points to show for their efforts in the two contests, as they’ll need interior pressure to make up for the lack of points.

In steps Hunter Fulks in that key role. On the end is Jason Anderson to compliment him Defense is also the name of the game for Van. A lonely six points against Meadow Brige is all they’ve put up in 2019, so a couple secondary pieces in Kalen Booth and Jacob Jerrell look to make life hard for the Wildcats’ offense.

Keys to victory: Belpre’s offense needs a spark as its scoreless-quarter streak is now up to six. Things might not get much better this week against Miller. The Golden Eagles are without versatile pieces Logan Adams and Connor Baker.

Belpre needs to play a great game as the Falcons could easily be 2-0.

Wahama got them by just four points last week.

Dual-threat quarterback Colby Bartley hopes to make things unpleasant for the Golden Eagles with his arm and legs. Favorite target Hunter Wellspring has been the main beneficiary so far this season.

Last year’s results: Did not play

Keys to victory: Who scores last?

This may be the most important answer between the Warriors and Marauders. Two high-powered offenses clash in Vincent as each group looks to propel their team past .500. Warren eyes a better defensive performance than one week ago when Marietta torched them for 485 yards on the ground.

Running the ball better could help Warren’s defense catch its breath on the sideline in a few long drives. The Warriors struggled on the ground one week ago with 22 yards on 17 attempts.

Keys to victory: Both team will come in viewing this as a winnable game. After snapping a 40-game losing streak in week one, Federal Hocking was blanked 31-0 by Southern last week. South Gallia dropped a close game in week one before being routed by Waterford in week two. Whoever can minimize mistake and execute their gameplan the most will come away with the victory in this one.

Keys to victory: In what could be the game of the year in the TVC-Hocking, Trimble enters as a heavy favorite as usual.

The Tomcats have yet to allow a point through two weeks while averaging 40.5 points per game.

Eastern is off to a hot start thanks in part to the running of Steve Fitzgerald and Blake Newland, but that duo will need to have its best performance to date in order to keep up with last year’s Division VII state runner-up.

Last year’s results: Did not meet

Keys to victory: Frontier’s offense is rolling behind sophomore quarterback J.D Schmidt. The Cougars are averaging 54 points per game and now square off against a Bridgeport defense that allowed 48 points to Monroe Central last week.

If the Cougars continue to execute on the offensive end, they should get their first 3-0 start since 2014.