Everyone wins at Parkersburg South tri 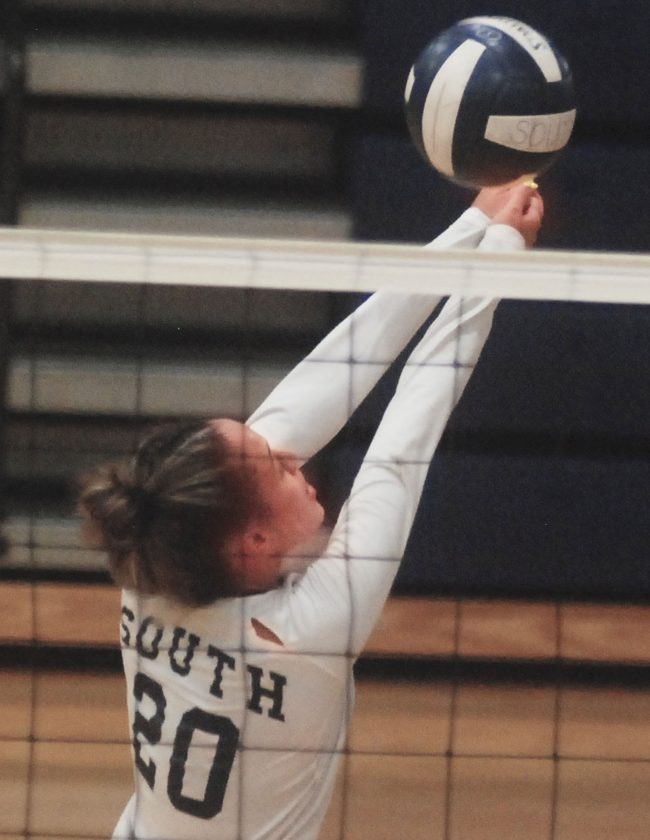 Photo by Jay W. Bennett Parkersburg South junior Nakia Bracy returns the ball across the net during Wednesday’s triangular against Morgantown inside the Rod Oldham Athletic Center. The Patriots finished 1-1, losing to the Mohigans and defeating Warren.

“The girls had a conversation in the locker room without us coaches after the Morgantown match,” admitted Bennett. “Obviously, what they said resonated with the girls, which is great. I want that to be a leadership thing and there’s nothing wrong with that.

“They came out and were a totally different team. The second game against Morgantown was a lot better, but we just couldn’t put it away and our mindset wasn’t right. Now, it’s just looking for that consistency.”

PSHS opted to start sophomore junior varsity member Jada Baker against the Warriors. After Patriot libero Kylee McCorkle made a dig on a smash by Warrior Abby Gilliand, who had a total of 13 kills in the tri, it was Baker who registered the downed spike to get things going.

Cassie Fink added three kills, one via a bump set by Alana Brigner, as PSHS moved ahead 8-4 early. Consecutive kills by Caspen Ford cut the deficit to two at 8-6 and the Warriors finally went ahead at 18-17 with Myah Husted at the service line. Warren, now 3-4 with an 11 a.m. tri set for Saturday at Vinton County, pushed ahead 19-17 when Haylee Morgan and Autumn Miller double blocked Brigner. However, the Patriots continued to fight and went ahead 23-20 thanks in part to a pair of service points apiece from Nakia Bracy and Fink. It was Fink’s kill from a Haley Hatfield assist which made it 28-27 and then Fink served for the 29-27 set one win.

A block by Hannah DeWitt on Baker gave the Warriors a quick 1-0 lead in set two, but downed spikes by Reagan Nutter and Fink tied it at two apiece. Nutter then tallied four service points and Hatfield later followed with seven straight, including a trio of aces, as the Warriors trailed 14-4 and never recovered. Warren managed to stave off four match points, which included a kill and a block assist by Madison Foy.

Morgan finished with 36 total assists with 17 coming versus PSHS, which was led by Fink’s six kills, McCorkle’s 10 digs as well as a combined 13 assists from Somerville and Hatfield versus the Warriors.

Jordan Casteel served for the first five points to start the evening for Morgantown, which never trailed and got set point on a Patriot attack error with Sarah Brown toeing the service line.

PSHS put up a much better fight in the second set and had it square at 13-all after a pair of Catreena Shears points. However, the Mohigans of first-year head coach Erica Manor, who was the state player of the year while at Musselman, took the lead for good at 21-20 when Sage Halbritter had a kill. That was followed by a downed spike from Alayna Corwin and then an ace by Halbritter. Emily Goldcamp’s kill sealed match point.

Warren and Morgantown had a tough battle, but the Warriors finally took the set one lead for good at 23-22 when Morgan had a second-hit kill, which was followed by a Foy smash. A MHS attack error sealed set point.

Thanks in part to some solid double blocking by Emily Laskody and Halbritter along with a Casteel ace and downed spikes by Corwin and Grace Washburn, the Mohigans managed to build a 16-12 advantage in the second set.

That cushion proved to be short lived as Hannah DeWitt and Gilliand produced consecutive kills. Later, Warren libero Lakyn Ellenwood served for three straight points to push the Washington County squad ahead 23-22. A kill by Gilliand made it 24-23, but Corwin pushed the ball across the net and found and opening to tie it. Warren, though, got the final two tallies via another Gilliand kill and then a Foy service point thanks to an errant Mohigan pass.