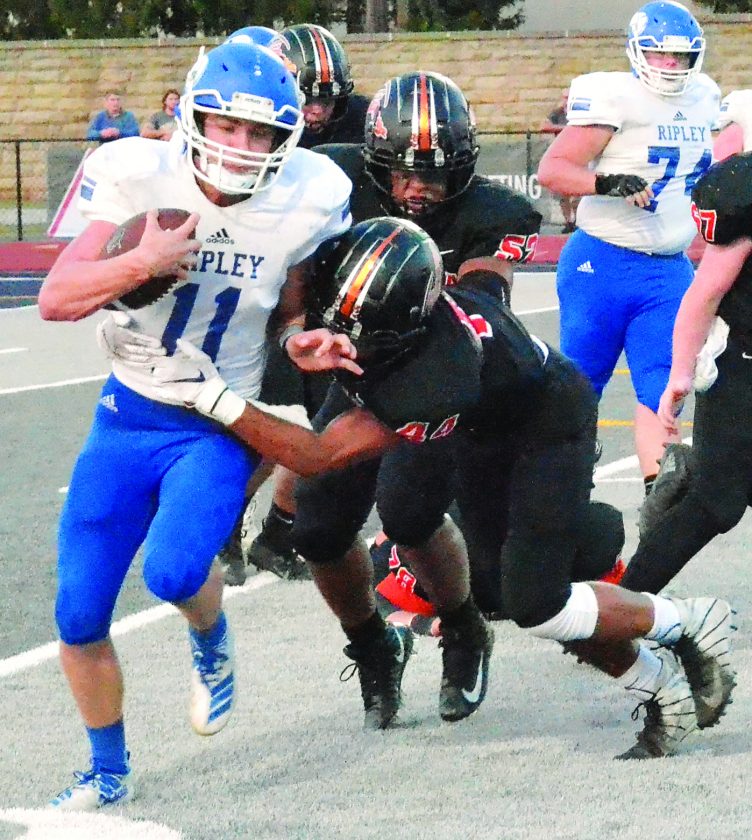 After Ripley High scored two straight touchdowns to tie the game, the 6-foot-1, 190-pound Marietta High senior broke one for 65 yards and a score in the fourth quarter to lead the Tigers to a 21-14 homecoming triumph Friday night at Don Drumm Stadium.

“The linemen and the fullback made a good hole for me, and I just took off,” said Taylor of what proved to be the game-winning TD with 9:51 remaining in the contest. “That’s what coaches tell us, once you see the hole just go, and it worked out for us.”

Taylor finished with a team-high 182 rushing yards on 12 carries and two touchdowns. He also had a 55-yard run to paydirt in the second quarter.

“Chase had a nice little (game-winning) run,” said MHS head coach Jason Schob, whose Tigers improved their record to 3-1. “The offensive line gave him a crease, and that’s all you need sometimes is a crease. I’m really proud of the kids for battling and competing.”

Eddie Smolder-coached Ripley (1-3) was led by running back Cameron Ramsey, who rushed for a game-high 197 yards on 25 carries. Jacob Fouty added 47 yards on five totes and one TD run of 15 yards.

Kaidin Hall scored the Vikings’ other TD from two yards out.

Marietta scored on its second offensive possession late in the opening period when Alkire on a read option kept the pigskin and raced 20 yards to the end zone. Sean Fournier’s extra-point kick made it 7-0.

Early in the second quarter, Ripley shot itself in the foot when QB Noah Westfall fumbled and it was recovered by Marietta junior Scott Offenberger. Capitalizing on the turnover, Taylor ran 55 yards to the house, and Fournier’s PAT stretched the Tiger advantage to 14-0, also the halftime lead.

Before the first half was completed, Taylor pounced on a Viking fumble, and Alkire had a throw intercepted by Ripley Noah Scruggs.

In the third quarter, with Ramsey doing most of the carrying, Ripley moved the ball to the MHS 2, where Hall ran it in to cut it to 8. Left-footed Maximus Greely-Fay’s PAT made it 14-7.

Then, early in the final period, Ripley got the equalizer when Fouty ran 15 yards for a touchdown and Greely-Fall split the uprights.

“I thought we came out a little lackadaisical in the second half,” Schob said. “When it was 14-14, Ripley had all the momentum in the world. But I’m really really proud of the kids for fighting back.”

After the ensuing kickoff, Taylor took an Alkire handoff, and he was off to the races down the left side of the field — all the way to the end zone.

“Corbin handed it to me, and I tied to find the hole — and found it,” Taylor said. “I just went down the field and scored.”

Added Schob, “Chase is a pretty good running back. And the nice thing is when he gets into the open field, he uses his speed.”