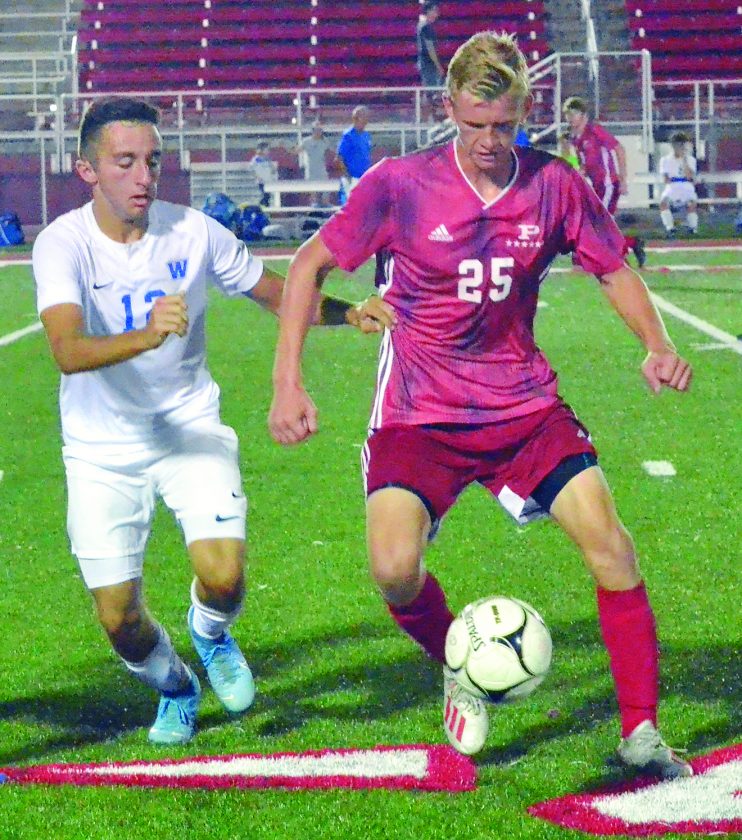 After spotting Warren High an early one-goal lead, the Big Reds bounced back with three unanswered scores to claim a 3-1 decision.

“That’s a good win,” said PHS head coach Don Fosselman. “We don’t have many. It’s only our third one. That was the best game we’ve played all year.

“These kids…look at them…that’s what you’d call a good tired. They played their butts off tonight. They didn’t quit. They were down 1-0 and they fought back. It was just a good team effort tonight. We were due for a good game.”

Jamie Couch, Ashton Farnsworth, and Tristen Brogan each had a goal for the Big Reds, who improved their record to 3-5-2 on the season.

“We didn’t play the way we should’ve played,” said WHS boss Ekrem Eksi. “And, Parkersburg played better than we did, except for the first 15 minutes. The second half was almost even. They (Big Reds) deserved to win it.”

Warren got an early bird goal in the third minute when Ott drilled a hard shot past PHS keeper Caleb Davis. Shane Gardner was credited with an assist.

“We started the game really well,” Eksi said. “But for some reason after the goal, we stopped playing our game — and started defending. And, that created a problem for us.”

About midway through the opening half, Parkersburg went on the attack, and Tanner Stauffer crossed the ball from the right wing to Couch, who had a real good look on goal on the left side and finished to knot the score at 1-all.

Warren keeper Hunter Hanes never had a chance on the boot.

Then, with 4:35 remaining before halftime, Farnsworth headed home Terrance Wright’s right-side corner kick to make it 2-1, also the score at intermission.

During second-half action, the play was end-to-end. In the 61st minute, Brogan got an insurance goal in virtually an open net with Farnsworth assisting. Warren keeper Jackson Petty, who filled in for the injured Hanes early in the second half, was off the goal-line.

“That was the clincher,” Fosselman said. “Tristan beat the keeper (Petty), who was way out of position, with an outside, left-foot shot.”

Defensively for PHS, Brendan Whitlatch marked Warren senior standout Ethan Yost for much of the match.

“That Yost is so fast,” Fosselman said. “There’s fast and then there’s Ethan Yost fast. He is so fast.

“Brendan did a nice job on him.”