Big Reds get the shutout 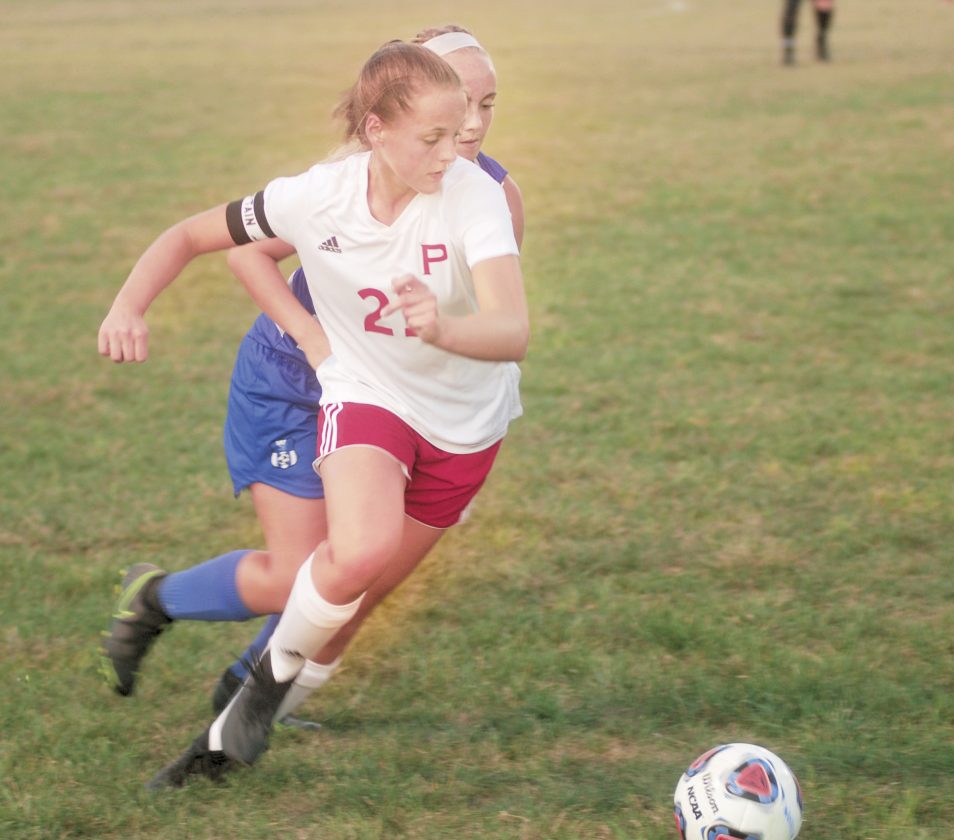 Photo by Tyler Bennett Parkersburg’s Bethany Meek gets by a Warren defender during the Big Reds’ 2-0 victory Monday night at Vincent.

VINCENT– Unable to come up with a goal in numerous chances throughout the entire first half, junior forward Madison Spears finally put the Big Reds on the scoreboard in the 38th minute. It wasn’t until a goal from midfielder Maddi Leggett off the assist from freshman Payton Harvey in the 55th minute of the second half though that the Big Reds finally put away the hosting Warren Warriors.

PHS gave the Warriors their first loss on the campaign Monday night.

Throughout the entire night the Big Reds applied constant pressure to the Warriors back four, spending primarily the majority of the game holding possession on the Warriors’ side. Coach Brad Morris and the Big Reds will be disappointed in leaving Vincent with only two goals on seven shots.

“We had a lot of opportunities that just fell short. Our connecting from our backfour into the center mid was spectacular,” Morris said. “But once we kind of got it up to the attacking third. We couldn’t get that last pass to connect, it was either too wide, too far or sucked right into the goalies arms.”

Receiving the ball in the first, PHS spent the first three minutes passing the ball around in its own half before going on the attack. Pushing the ball into the box off a nice passing combination from junior Bethany Meek to junior Spears gave way to a look at goal by freshman Jenna Carpenter, but the shot was deflected in route to goal and was cleared.

In the winding moments of the first period, freshmen Annie Mildren intercepted a pass from Warren’s goal kick to find found Spears outside the box.

Spears later moved into the box to for shot on goal, beating the Warriors keeper Millie Ryan to left, giving the Big Reds the 1-0 lead at the 38th minute mark.

Meek battled for a late goal versus Warren junior defenders Savannah Banks and McKenna Wynn, until passing it to Spears on the right elbow of the box. Spears took a shot at a goal, but was deflected by a handful of Warren defenders for a corner kick. With seconds until halftime, Leggett hurried to the right corner flag trying to put the ball in play. Leggett’s cross was off in time, however, time expired as the ball was landing into the crowd of Big Reds and Warriors in the box. Coming on a sub in the second half, forward Harvey offered a different look for the Big Reds offense.

Being a handful to deal on the the left flanks for Warren wingers, Harvey took possession from Kalee McGee to find an open Leggett 20 yards out.

Once receiving the ball, Leggett lined up left to the goal, going upper left corner. Beating keeper Ryan for the second goal in the 55th minute.

“Madison’s goal was spectacular and Maddi doesn’t usually score. I put her at attacking-mid to get her more of her basketball vision on the soccer field,” Morris said. “I told her if she can, drop some assists like she does on the basketball court and facilitate those passes to the attackers. We’re going to have good chances. Then whenever she steps up and scores around, that’s icing on the cake.”

Warren didn’t have much luck on the offensive end, only accounting for four shots on goal, the only Warriors getting looks was Alya Pinkerton, Sophie Cochran, Macie Smith, and Jaclyn Ludwig. “Overall I think that we had put together a pretty good game plan, trying to try to limit their opportunities,” Warren head coach Andy Pinkerton said, “Ellie played quite phenomenal with us. She’s a great leader in the back, she communicates well with the defense. That helps us keep organized and limit the opportunities This is only our second and third goal that we’ve allowed this year.”