Big Reds get back in win column 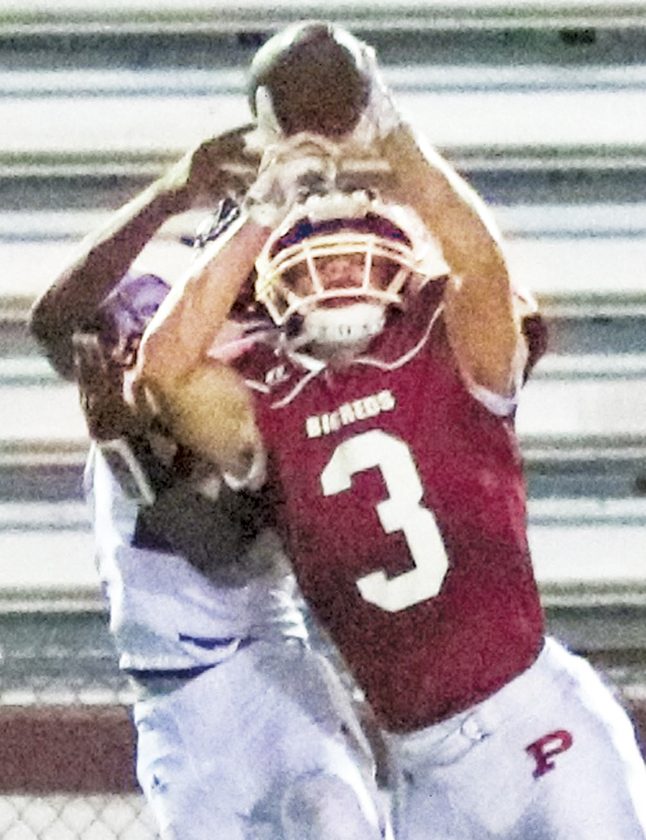 The Flying Eagles of head man Street Sarrett managed a pair of Joseph Wells 44-yard field goals en route to trailing 13-6 at intermission, but the Big Reds of head man Mike Byus dominated the second half.

“I just asked them to please study hard next week so coach Byus doesn’t have to have an aneurysm,” said the third-year Big Red boss, who watched Singer throw a pair of first-half touchdown passes and finish with game-highs of 20 rushes for 133 yards. “We just tried to take what they gave us. They backed off so we quit throwing home runs and threw dinks.

“Sammy (Potts) turned one into almost a touchdown. (Singer had) a solid game and the big thing is he’s going to make great plays because he’s a great player and then as a sophomore he has to learn to minimize the negative plays and he’ll be fine.”

The 1-2 Flying Eagles, who welcome Huntington to town next Friday, reached the red zone on their opening drive, but a chop block proved costly and the 16-play effort which took 8:36 off the clock resulted in a 3-0 lead. WWHS had a trio of first downs in the series, but didn’t have another one until the third quarter.

Parkersburg marched down the field on what turned out to be 16-play, 89-yard drive as Singer hooked up with Braeden Mason in the end zone for a 21-yard touchdown pass on a third-and-11 play at 9:55 of the second.

With 4:22 left in the half, Potts caught a slant from Singer and raced to paydirt from 50 yards out. His extra point failed, but PHS led 13-3.

On the ensuing kickoff, Martay Lee nearly housed it, but was stopped after a return of 65 yards, which led to Wells’ second field goal. It would’ve been good from 60-plus.

“Nothing was working there in the second half,” admitted coach Sarrett, whose team had 128 total yards and allowed 397. “We just made some mistakes man. We’ve just go to correct them. You can’t put the ball on the ground and throw balls to unopen people.”

PHS opened the second half with the ball and Snodgrass, who had all 15 of his totes and 85 stripes after the break, went to work as the Big Reds went into the hurry-up offense. Singer had a 27-yard run after a fake end around to Braeden Mason to get a first down on a second-and-19 play from their own 17. Snodgrass followed with runs of 10 and 12 yards before going for 21 yards after he stiff-armed a Flying Eagle defender. A second down pass to Matt Curry in the end zone went incomplete and Potts’ 29-yard field goal made it 16-6 at 8:47 of the third.

Although Casey Mahoney recovered a fumble for the hosts on the next drive, the WWHS defense held.

After Big Red Luke Read intercepted an overthrown pass by Maddex McMillen, Singer showed off his running ability by stiff-arming a trio of defenders before he was horse-collared out of bounds at the 4. Snodgrass punched it in from the 2 following the 2-yard penalty with 4:32 left in the third, but it was just 22-6 as Potts’ kick was blocked by Antwon Burnett.

The visitors had a prime chance to score late in the third after they took over at their own 38 when Jacobe Harville strip-sacked Singer and Donte Quattrone recovered. However, the PHS defense stood tall again as Kyle Moore had a pass breakup on second down and CJ Wade had a quarterback pressure on fourth down.

Potts caught a quick hitter on the next drive and dove in for a touchdown, but he was ruled out of bounds at the 3 for a 37-yard gain. Snodgrass followed by bulling into the end zone to make it 29-6.

Consecutive sacks by Devin Elder and Justin Waybright helped thwart Woodrow Wilson’s next drive and Big Red signal-caller Michael Owen added the final six-pointer via a 6-yard TD run at 3:42 of the fourth to set the final score.

“The message (at halftime) was to play hard, play physical and play fast,” added Byus, whose squad plays next Friday at Capital. “We tried to go fast and get them tired. The little things that make a difference, we just got to get better at that. They got to focus.”

Potts finished with three catches for 90 yards and Mason had four grabs for 48.