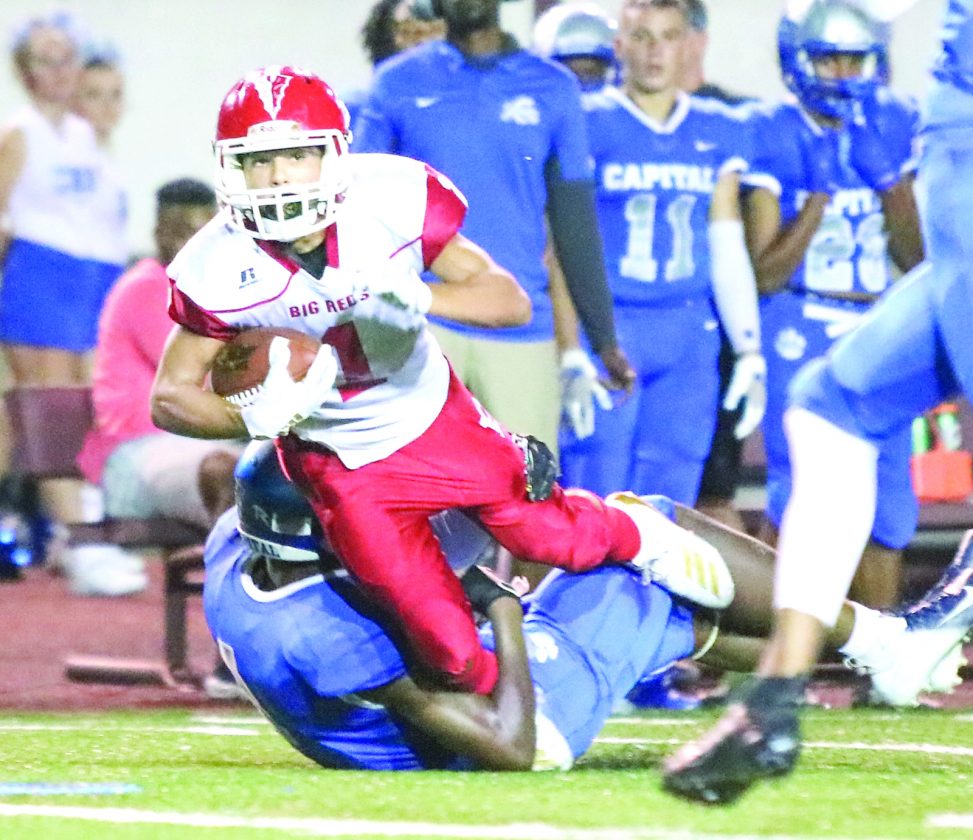 Photo by Duane West Parkersburg’s Braeden Mason (1) dives with the ball during a high school football game against Capital Friday evening at University of Charleston Stadium.

CHARLESTON — The frustration of playing Capital: You can bottle up the Cougars one, two, three plays in a row, then they break one. And then you’re done.

The Cougars (3-1) and Big Reds (2-2) came into the game tied for seventh in the WSSAC Class AAA playoff ratings.

Landers, who didn’t miss a throw in the first half, ended up passing for 197 yards and three touchdowns, completing 18 of 21 attempts.

The Big Reds had to be satisfied with where they stood at halftime – down just 14-6 and having held the Cougars to 31 yards on nine rushing plays. But all Capital’s playmakers need is a crease to get a big gain, and that’s what they did in the second half.

Shawn James burst 85 yards for a touchdown in the third quarter and Tay Calloway broke off a 68-yard scoring run in the fourth quarter.

Capital came into the game with seven touchdown plays of 40 yards or longer on offense, defense and special teams, and besides the long runs by James and Calloway on Friday, also got scoring passes of 51 yards and 39 yards from Landers to K.J. Taylor.

“Those big plays are easy to call,” Carpenter said. “I can’t believe I’m the only one calling them. Don’t let anybody see that film. I don’t want to let them steal our plays. That’s why we’re winning.”

“Our pass defense, we’re just playing a lot of inexperience out there,” Byus said. “Even our non-sophomores are inexperienced because we had 26 seniors last year, so they’re still learning.”

Taylor, who sat out last week’s win at Hurricane, ended up with 130 yards on eight receptions for Capital. Calloway ran 12 times for 118 yards after gaining just 39 yards by halftime. James added 83 yards on six carries despite the 85-yard TD run.

The Cougars might have put more points on the board, but were saddled with eight first-half penalties for 85 yards and had 13 in all for 136 yards. Flags negated a 48-yard kickoff return by Kerion Martin in the first half, a 20-yard punt return by Knox and a 16-yard punt return by K.J. Taylor. In the second half, Martin had a 100-yard interception runback for a TD wiped out by a penalty.

Parkersburg shaved its deficit back to 14-6 at halftime with a 78-yard second quarter drive, capped by a 1-yard run from Bryson Singer. On the possession, Singer was 2 of 3 passing for 40 yards and ran six times for 19 yards.

At the break, Braeden Mason had caught all eight of Singer’s pass completions for 105 yards and ended up with 10 catches for 133 yards. Singer completed 9 of 23 passes for 117 yards and carried 17 times for 126 yards, scoring both his team’s touchdowns.

Capital has now won its last eight games against Parkersburg. The Cougars visit No. 1 Cabell Midland next Friday, and the Big Reds play host to Marietta.

Before the game, a video tribute for Roane County football player Alex Miller was played on the scoreboard. Miller died last week after collapsing during a game against Clay County. Capital captains Miller and Knox carried a No. 80 jersey – Miller’s number – out for the pregame coin toss.