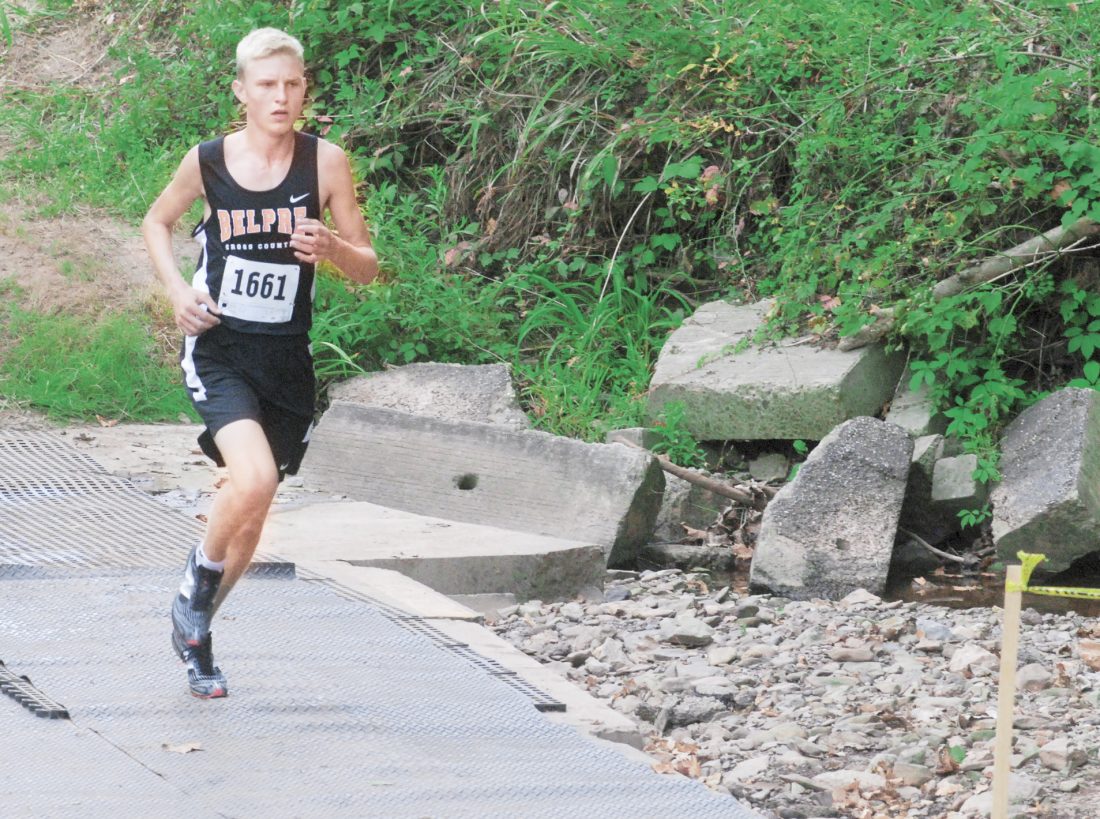 Photo by Ron Johnston Marietta High’s Jessica Smith, right, is thwarted on a scoring attempt by Dover keeper Emma Smith, left. Dover defender Haylee Kai (21) looks on. The Tigers led 2-0 when the match was halted due to thunder and lightning. The contest is tentatively scheduled to resume at 6 p.m. today.

MARIETTA — Marietta High’s cross country teams will have both a numbers and course advantage at 9 a.m. Saturday at the annual Elizabeth S. Broughton Memorial Invitational at the Marietta Broughton Nature and Wildlife Area.

“We have from 38 kids on the roster,” said MHS head coach Mollie Runyon, a Washington Elementary 4th-grade teacher. “And, we know the terrain. I mean, we’ve been practicing here since Aug. 1.”

Runyon will be assisted by John Tynan and Peyton Cochran.

“This will be the first run of the season for many of the schools,” Runyon added. “So, it’s a big deal. But there are no guarantees.”

The Marietta boys are expected to be paced by senior Jack Wesel. 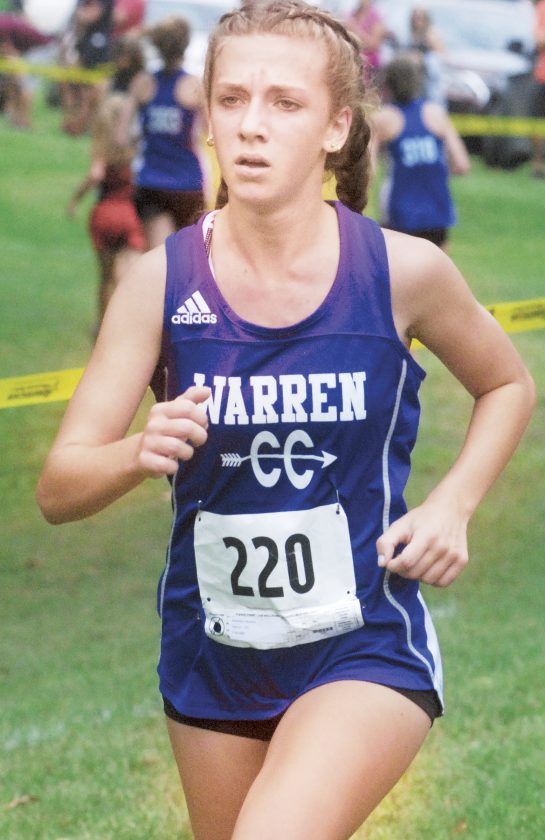 “Keep an eye out for Dean Morris, a foreign exchange student from Germany,” Runyon said.

The other Washington County schools competing at Broughton are Warren, Fort Frye, Belpre, and Waterford.

“We’re expecting the race to be competitive and a good baseline to establish our season.” said Warren boss Neil Brague. “It’s always well organized and a good first meet of the year that is close to home. “We trained on it a week ago and it’s still the same mix of uphills, downhills and straights. We can expect it to be hot, hazy and humid next Saturday morning because it’s August. We will hydrate and deal with the conditions like everyone else.”

“We have a good group of 25 runners this year,” Neil Brague said. “Thirteen girls and twelve boys.

“It would be premature of us to make any predictions, but we look for our runners to do more pack running. Race results will show who to keep an eye on.”

The Warren boys will be paced by senior Preston Rowland-Demster, a Warrior soccer player a year ago. Also on the roster are juniors’ Austin Coleman, J.T. French, Justin Pate, and Matthew Rauch. The sophomores are Bryson Angelo, Jaiden Napalo, Hayden Pelletier, Brennan Perdue, and Andrew Vincent.

The WHS freshmen are Kamron Napalo and Oliver Yost.

Perdue recently finished sixth in the 2-mile run in 11 minutes and 14 seconds at the Parkersburg News and Sentinel Half Marathon races last Saturday. Vincent was 16th overall in 12:09.

On the girls’ side, Warren will be featuring seniors’ Pearl Herriott, Brooke Holdren, and Jenna Walters. The juniors are Taylor Appleby, Savannah Jarvis, Devanne Reynolds, LeeAnn Skeen, and Allison Werry.

The Warrior sophomores include Heather Hamrick and Lily Herriott, and the frosh are Tessa Haffner, Angel Smith, and Regan Tanner.

At one time, the Fort Frye team was very familiar with the Broughton course.

“We used to consider Broughtons of kinda being our home course until we started our home meet six years ago,” said FFHS head coach Jason Lipot. “The location of the venue with it being on a nature and wildlife park makes it a great race.

“I personally love the course as does our team. It’s a challenging course. There’s not many areas to rest and regroup sorta speak.”

“There’s plenty of rolling ground, hills (up and down), and turns,” the Cadet coach continued. “Yes, every year we come here to practice for many reasons.

“One we discus how to tactically race the course, and to prepare them mentally for some of those challenges. Others are to run in areas other than around our school and streets.”

“This year, our high school numbers are down,” he said. “We lost our top five runners (including standout Justin Anderson) this year on our boys side and four on the girls. So we are in the re-building process. We do however have great numbers on the junior high side. Don’t worry we’ll be making some noise soon.”

The Fort boys are expected to be paced by Draven Rowland and Justin Carpenter. On the girls’ side, keep an eye on Patty Wesel.

“Every year I say it’s a wide open race mostly because you don’t know where everyone is at,” Lipot said. “This year, there might be some clear favorites: the boy from Belpre (Eli) Fullerton. But nothing is for certain. Caldwell, Warren, and some West Virginia teams all have some individuals capable of winning on the boys side.”

Fullerton, incidentally, recently won the 2-mile run at the Half races last Saturday in Parkersburg. The Golden Eagles junior standout covered the distance in 10:18.

Last year, Fullerton was the third boy overall at Broughton in 17:14.10.

The Belpre harriers are coached by Jen Wells.

On the boys’ side, there are freshmen Ian Fairchild and Luke Stollar.