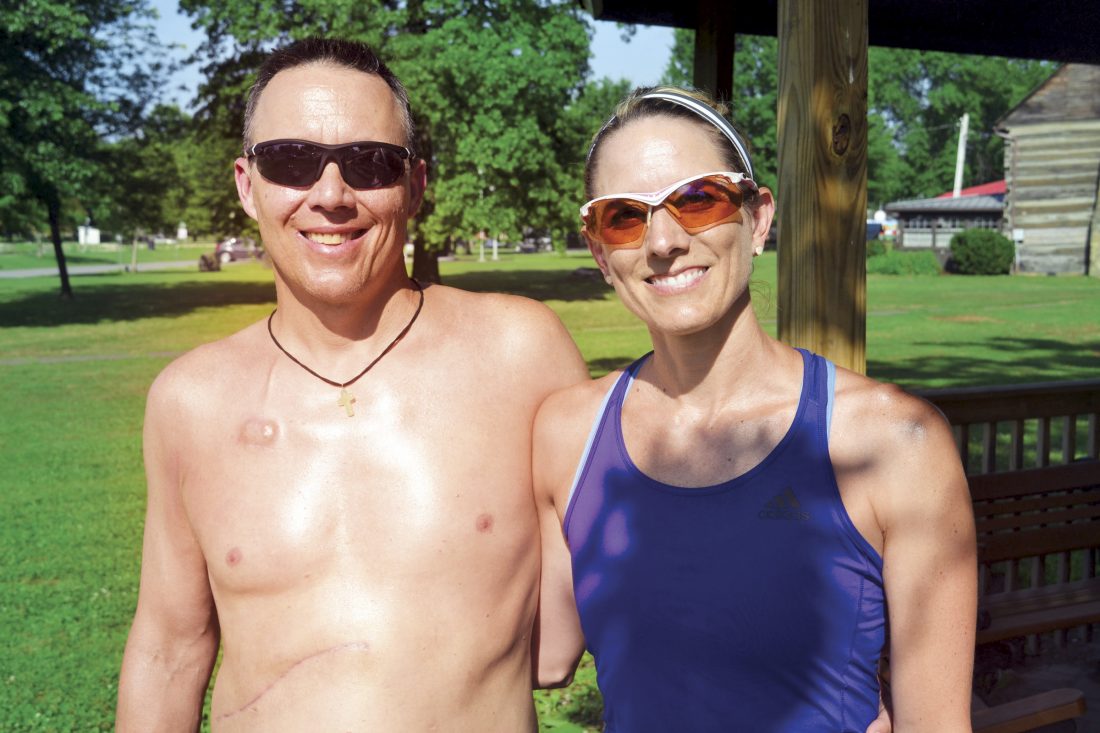 Shawn and Deana Farrah return to the running ranks of the News and Sentinel Half Marathon after missing last year’s race this Aug. 17 after dealing with numerous issues. Photo by Ron Johnston

MARIETTA — Shawn and Deana Farrah of Devola each is looking at the Parkersburg News and Sentinel Half Marathon course as a comeback trail.

Of a very serious nature.

“I was diagnosed with colorectal cancer in December 2017,” said 46-year-old Shawn, a 1990 Williamstown grad. “I had chemotherapy radiation and a couple of surgeries. I weighed about 145 after surgery. I didn’t run for over a year — and I missed it.

“I just started running again in April, about a month after my last surgery. I’ve gained about 25 pounds in the last three months and have built myself back up. Hopefully, I’ll be ready by August.”

“45 is the recommended age for a colonoscopy,” he said.

“I recommend that everybody get checked. I wouldn’t want anybody to go through what I’ve gone through in the last couple of years.”

“I’ve placed in my age group a couple of times,” he said. “It just depends. The times go up and down with the weather. You don’t know what to expect in August.”

Deana, like her husband, also missed last year’s Half.

“I was off with a labral tear in my hip,” she said. “I had surgery last spring and I’m just getting back.

“With my hip and everything Shawn went through last year, it’s been a journey.”

“I then had an injury, and I turned to running,” she said.

“We’re both in the same boat now,” Deana said. “It’s just good to be back with everybody in the club. River City Runners is like our second family. We’ve met a lot of friends through running.

“It’s a wonderful club with healthy people with great attitudes.”

Deana said that she and her husband, who are raising three children, also run with the Marietta Y Youth Running Club.

“We meet a couple of times a week and run with kids, from the first to eighth grade,” she said. “We train them to run a 5K.”

Interestingly, neither husband or wife ran in high school.

“Shawn was a wrestler, and I was a gymnast,” Deana said.

Before last year, the duo were regulars on the running circuit.

“We ran a lot of local races and used to race every weekend,” Shawn said.

Within the last month or so, Shawn and Deana have been back on a running schedule, and competed in the Chick-fil-A 10K and Dad’s Day 5K runs in Parkersburg.

“We’re just glad to be back running and out here. Period.” Deana said.

Both have modest goals for the Half in August.

“We just want to cross the finish line,” Shawn said.

As for the Half itself, Deana and Shawn cautioned first-timers of the race.

Shawn agreed and added, “Don’t take off too fast, because you’ll regret it in the last few miles. Keep your pace where it’s supposed to be and don’t wear yourself out early in the race. It gets warmer as the race goes on, too.”

* Those interested in running the 2019 Parkersburg News and Sentinel Half Marathon can register at newsandsentinelhalfmarathon.com.