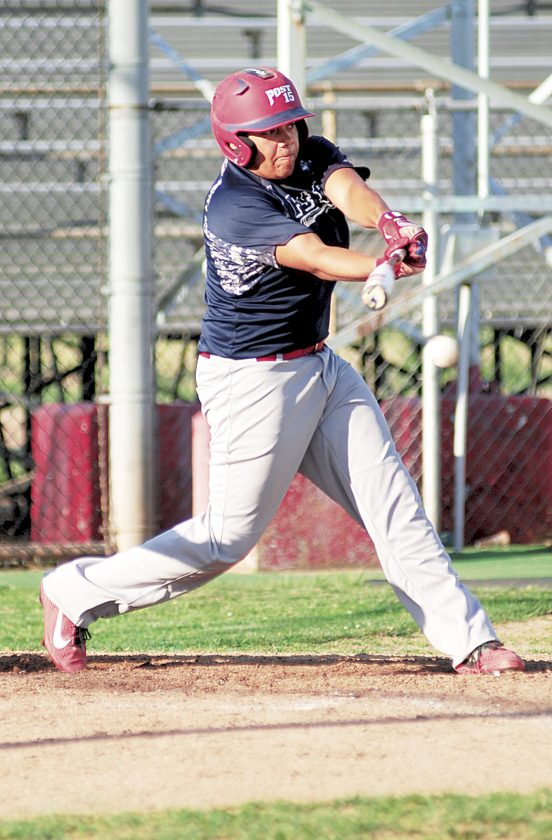 When it was all said and done, Charleston Post 20 managed to earn a twinbill split by pulling out a 12-11 eight-inning victory in the nightcap.

In the opener, Colin Bryant worked six innings of five-hit ball with three walks and seven strikeouts to earn the mound triumph. Nathan Currey fired a clean seventh for the save as Post 15 improved to 5-2 following the 7-4 victory.

Post 15 third baseman Jordan Batten finished 3 for 3 with a double and two RBIs. Shortstop Todd Burner had a 3 for 4 effort that included two steals, a double and a run-batted-in.

Casey Hurley was charged with the game one setback after allowing nine hits in five innings with five earned runs.

Nathan Kuhn’s three-run bomb to right put Charleston ahead 3-2 in the top of the second, but the hosts added four in the last of the frame to take control.

Batten’s RBI single plated Tyler Haskins for Post 15’s opening run and Chase Swain followed with a sac fly RBI to score Bryce Eagle, who reached on a bunt single in the first.

The first five batters for Post 15 reached in the second. Jacob Hoyt walked, Hayden Morris had a bunt single and then Burner had an RBI and reached on an error. That was followed by Haskins drawing a free pass and then Eagle had a key two-run single. Batten’s RBI sac fly made it 6-3.

Charleston, now 5-1 after the doubleheader, allowed its final run in the third. Connor Walker started it with a leadoff single and later scored on Burner’s RBI knock to left.

Post 20 got their last tally off Bryant in the sixth when Logan Spurlock singled and scored on an error.

Parkersburg Post 15 manager Mike Goodwin’s club, which returns to action at 3 p.m Thursday at Bridgeport in the Hillbilly Hardball Tournament versus Pemberville (Pa.) Post 183, held a 9-6 lead going into the top of the seventh of game two, but couldn’t hold it.

Landen Fairchild had the big hit for the visitors with a bases-clearing triple down the right-field line. WVU-bound Carter Lyles then had a go-ahead RBI double for the 10-9 cushion.

However, Post 15 managed to force extra innings in the last of the seventh when Burner reached on an infield single and eventually scored on a ball hit by Batten. Burner was at third base and Batten hit a fly to right. Burner faked the tag but went down the line and the throw from right field ended up going high to the backstop and the ex-Parkersburg South all-stater scampered home.

Even at 10-all going to the eighth, the locals couldn’t hold off Charleston, which got blanked in the fifth and sixth by Kyle Moore. He was aided by a double play to end the fifth when Lyles had an RBI sac fly to score Andrew Sydenstricker, but Spurlock also tried to reach home from second. Post 15 center fielder Morris had other ideas and fired to Haskins, who was playing second after catching the opener. The ex-Ripley Viking, who was named the Class AAA first team all-state catcher this spring, made a perfect cutoff throw to home, where catcher Andrew Anglin applied the tag.

Currey replaced Moore in the seventh and allowed Fairchild’s bases-clearing three-bagger. Post 20 had the top of the order up in the eighth and a pair of Parkersburg errors helped to saddle Currey with the mound setback.

Leadoff hitter Brayden McCallister walked and after Kuhn reached on an error, Spurlock made it 11-10 with a sacrifice fly. Kuhn made it a two-run advantage when he scored via an error.

Down but not out, Bradan Mullenix coaxed a one-out base on balls in the eighth. After winning pitcher Michael Stuck got Post 15’s Jack Hadley looking for the second out, the home crowd had plenty to cheer about as Cullen Cutright laced an RBI double to left-center. However, he was gunned down at third by a half step for the final out of the game trying to stretch the gapper into a triple.

Charleston starting pitcher Tyler Lafferty couldn’t get out of the first inning after issuing six free passes, but Post 15 only scored thrice. That included RBI free passes to Anglin and Mullenix.

Parkersburg drew a dozen base on balls in game two with seven of those eventually scoring.

However, Post 15 finished the twinbill by going 3 for 23 with runners in scoring position.

Cutright would’ve had a four-hit game in the nightcap, but Stuck was still playing the hot corner in the fourth when he made a diving stop and showed off his cannon one a lined one-hopper.