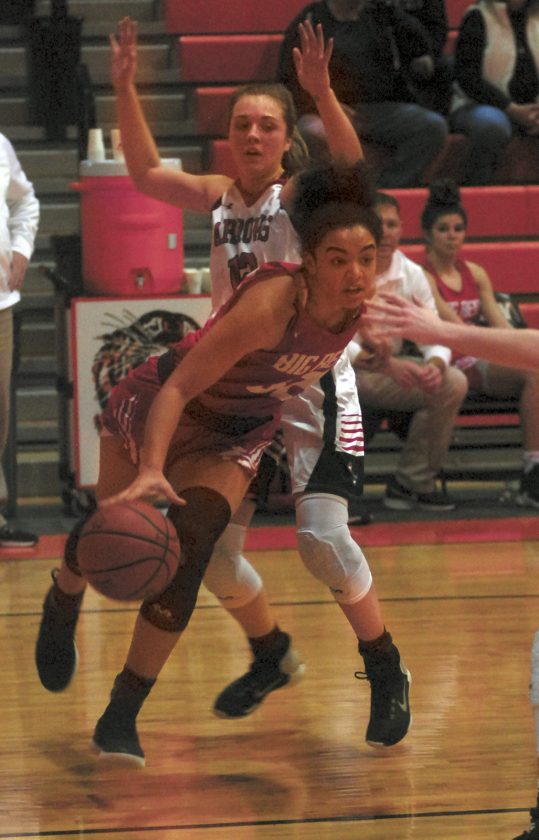 Photo by Joe Albright Parkersburg High’s Bre Wilson dribbles around a New Carlisle Tecumseh player during a 2018-19 regular-season game. Wilson, a 2019 Class AAA State Tournament All-Tournament team member, returned to action, along with the rest of the Big Reds in the three-week period.

PARKERSBURG –There is a buzz surrounding the Parkersburg High School girls’ basketball program during the three-week period. Excitement emanates from head coach Scott Cozzens and goes all the way down to freshmen Brilynn Florence and Sierra Mason.

Mason and Florence haven’t earned any prep mementoes, yet. But, they and their classmates received a big boost of motivation as the 2018-19 Class AAA state championship rings arrived for the older players Monday.

The young kids expressed extreme interest in the trinkets, according to Cozzens. Satiation of these desires could happen soon. The older girls are showing them what it takes to be champions so they might get rings of their own.

The Big Reds are again the favorites for the title as well.

Nelson’s classmate, Kisten Roberts, fully recovered from her back injury, has had a strong spring as well.

Enthusiastic participation provides a highlight as does the program’s first Camp of Champions.

“We have had a pretty good turnout and a lot of the focus has been on incoming freshmen and last year’s freshmen along with some of the grizzled veterans who want to come out and work on their game,” said Cozzens of the team activities.

“We haven’t had the entire team together yet … Some of the girls (Madi Mace, Bre Wilson, Aleea Crites, Maggie Richards and Sophie Nelson) are off doing their elite AAU stuff, which is fine.”

Cozzens’ participation though has largely revolved around the camp.

“I am not even in on the group messages,” said Cozzens of league play.

Assistant coach Phil Wilson handled coaching and scheduling duties at the summer league along with at GW and OU.

There may not be a busier person on the floor than Wilson. The fifth-grade boys are receiving instruction from him too.

“They have been working hard,” said Wilson of both groups. “We are trying to get everything organized and trying to get the incoming freshmen (girls) where they are supposed to be and catch them up before the season even starts.”

Half of bringing the girls up to speed included teaching some of the regular-season playbook for the high school season. The other half include the veterans sharing the culture of the program along with the expectations.

“They do work hard and they do hustle,” he said. “They just don’t have any quit to them. If you can combine their no quit with their ability to win, you have a good recipe for success.”

Each younger girl displayed these never-quit attitudes throughout the last two weeks. Wilson and Cozzens matched them up against 17- and 18-year olds attached to no expectations in their games.

“I am really happy with where they are,” said Cozzens. “The kids are adjusting really well.”

The younger and older girls alike also received a bit of leadership training at the camp. Groups of players are working with kids grades 3-5 (morning) and 6-8 (afternoon) on specific areas in a rotating fashion.

Creation of the teaching opportunity came in response to the community’s interest in the achievements of the Big Reds. It presents kids in the PHS feeder system an opportunity to work with players who have won two straight state championships. Cozzens and the girls are running the same training system used by the varsity team.

“A lot of these kids want to be in the seniors’ shoes in the next couple of years and this was a good opportunity for us to show them our drills and do a little playing,” said Cozzens.