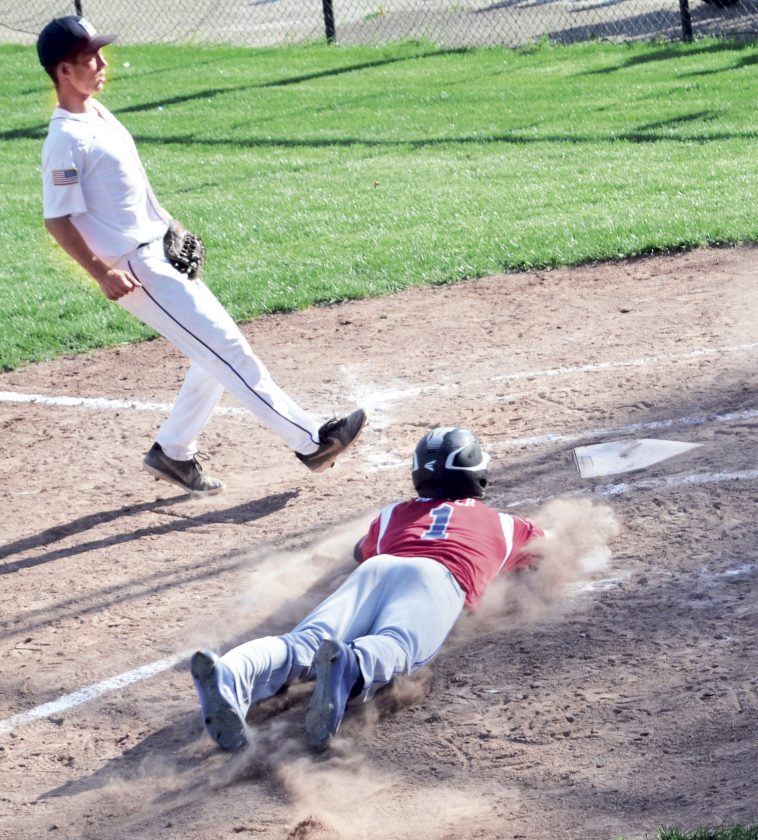 Capitalizing on three walks, a couple of singles, and a fielder’s choice in the frame, Cambridge plated three runs en route to a 6-5 triumph in American Legion baseball action at Legion Field Tuesday night.

“Cambridge is a good ballclub,” said Marietta skipper Larry Hiser. “They’re always solid all the way throughout their lineup.”

Logan Fox, Zach Hoop, and Ethan Clarkston each had an RBI in the fifth.

Post 84 righty Lane Howell of Shenandoah relieved starter Hunter McClellan in the third and got the win. In five innings of work, Howell struck out three, walked one, and allowed four hits and one run.

“Lane did great,” said Cambridge boss Ron Antill. “When he came in, we were down 4-2, and he pretty much shut them (Post 64) down. I couldn’t have asked for anything better than that.”

Marietta reliever Jared Richards suffered the mound setback. Derek Duckworth started and threw three innings. Jarrett Jackson relieved Richards in the fifth and got the final out with the bases loaded.

“We went up and down our pitching staff a little bit today, and I think we did pretty good,” Hiser said.

Marietta fell to 3-4 while Cambridge improved to 8-3.

Post 84 staked itself to a 2-0 advantage in the top of the third when Dylan Beaver doubled home Peyton Neff and then scored himself on a wild pitch.

Post 64 responded with a 4-run outburst in the bottom half of the frame with Alkire and Jackson stroking back-to-back doubles and driving in two runs apiece.

Cambridge cut it to 4-3 in the fourth when Fox scored on a fielder’s choice.

In the fifth, Beaver led off with a base on balls, stole second, and legged it home on Fox’s two-out single to left. After Connor Leppla received a free pass, Hoop drove in Fox with the go-ahead run (5-4) on a single to left. Blade Barclay then got on to fill the bases when he was safe on a fielder’s choice.

Post 84 made it 6-4 when pinch hitter Ethan Clarkston walked to force in a run.

Marietta got one of those runs back in the bottom half of the frame (6-5) when Dennis plated Kail Hill with a long double off the left field fence.

Post 64 threatened to score in the bottom of the sixth when leadoff batter Joe Zimmer walked and raced to third on Mike Reeder’s single to right. Howell, however, got out of the jam when Reeder was caught trying to steal second. And, that was followed by a strikeout and a groundout.

“We’ll be OK once we get into a groove and play a few more ballgames,” Hiser said. “It’s only our seventh game of the year.”

Said Antill, “It was a fun game, back and forth. I hate those 12-2 or something games… This was fun.”