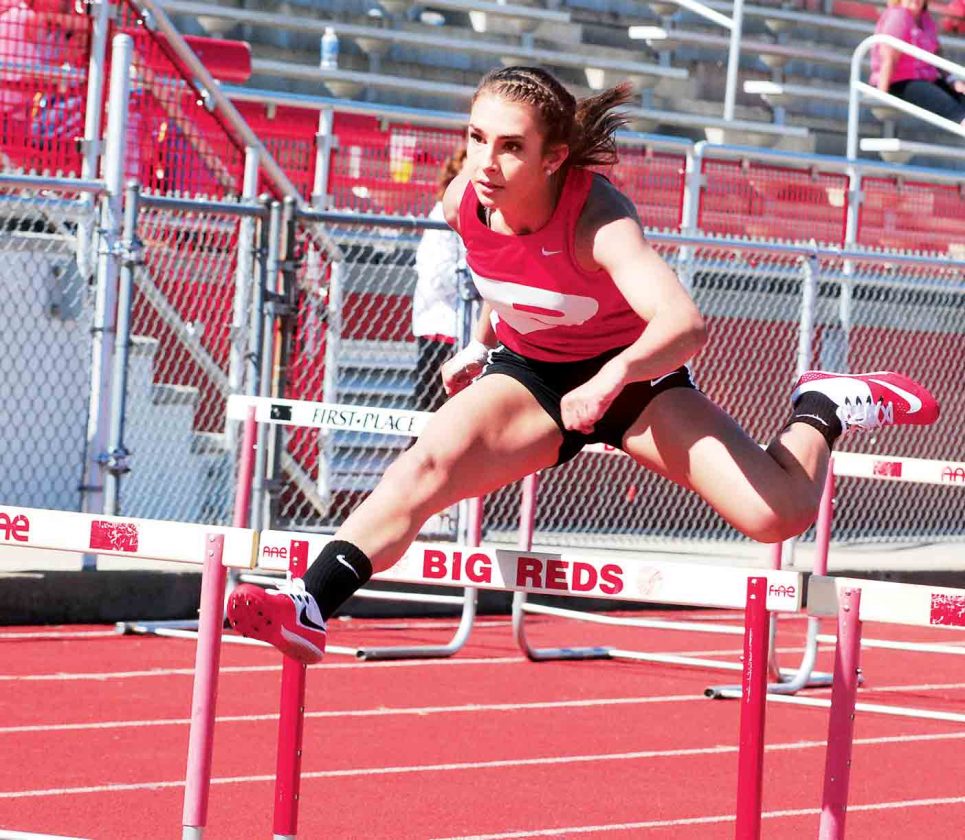 File Photo Parkersburg’s Emily Kupfner is set to compete with teammates Delaney Cox, Kendal Domenick and Holly Chapman in the shuttles hurdles at this weekend’s state track meet in Charleston.

PARKERSBURG — The state track and field championships are underway on Friday and Saturday, and several teams across the area are gearing up for the challenges they are sure to face.

The Parkersburg Big Reds are one of those teams, as the girls’ shuttle hurdles team is bringing an undefeated season into the state capital. When the season started in March, the team came in with a positive view of the new season. The group consisting of junior Emily Kupfner, senior Delaney Cox and the freshman duo of Kendal Domenick and Holly Chapman started 2019 off with a bang.

The quartet won the 4×100 shuttle hurdles race (1:13.79) over second place Parkersburg South by over a second at the Kim Nutter Invitational on March 22. That race set the tone for what was sure to be a memorable season.

The next race for the four Big Reds took place a couple weeks later at the Morgantown Invitational. This race came down to the wire.

Clay-Battelle battled the Big Red runners from the start, but Kupfner narrowly edged CB’s Addison Ammons by .16 seconds (1:10.30) to grind out the win. A margin of victory that small might rattle a team, but these four athletes didn’t let it faze them.

The beat goes on for hurdle coach Amelia Wolfe’s girls, as they enter the state meet having also won at the Mountain State Athletic Conference meet (1:07.90 over St. Albans) and the Region IV meet (1:08.42 over Huntington).

“They’ve been practicing really hard for weeks now. This is their fun event to do,” Wolfe said. “They take a lot of pride in this event, and they practice really hard every day. They want to be the best.”

When asked what the culmination of bringing a shuttle hurdles title back home would feel like, all four girls replied with the same response.

“It would be amazing!”

For Cox, the prospect of finishing her PHS track career with a win carries a lot of weight. However, she knows she is up for the task at hand.

“It’s very nerve-racking,” she said of the time taken to prepare for the race. “There’s lots of pressure.”

Brace, Kupfner and Chapman are competing in multiple events over the course of the weekend, and that preparation helps takes their minds off this event for the time being.

Still, the mixture of excitement and nerves is enough for coach Wolfe to tap into. She’s taking practice time and running each one with a “business as usual” approach.

If practice pays off, it could lead to the exclamation point on a season full of success for four Big Reds destined for big things in Charleston.