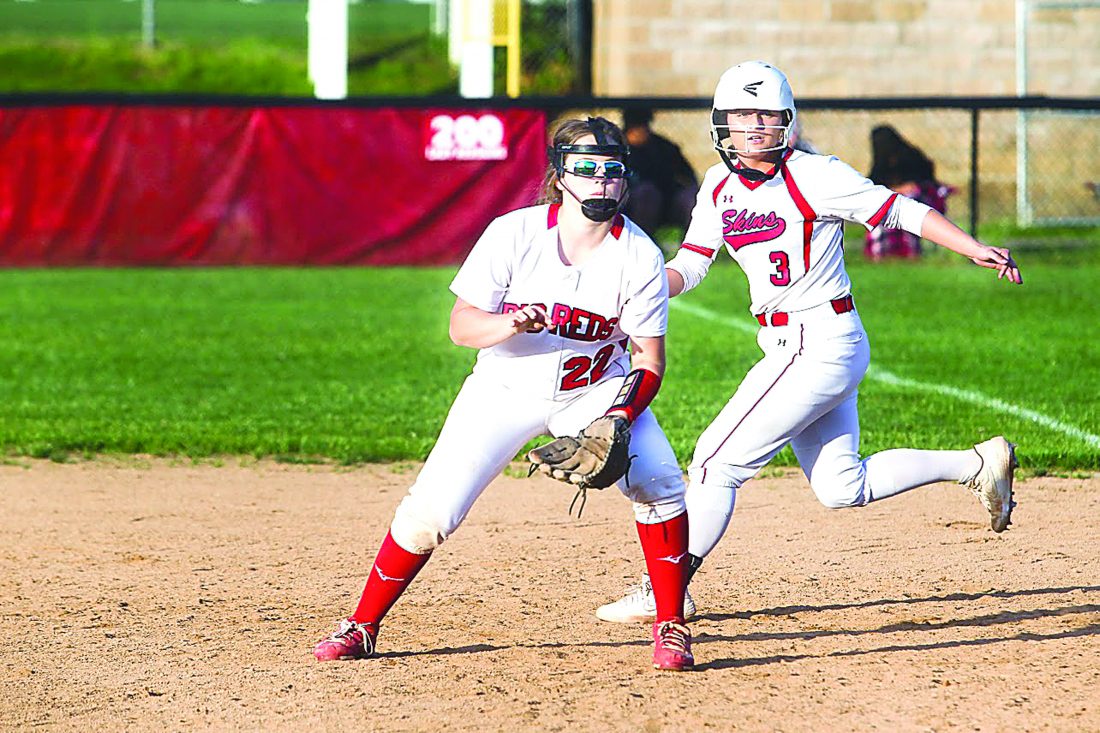 Tuesday night’s game was different, however.

The three long-time teammates decided to make a memory to last forever, combining to drive in 10 of 11 runs as Hurricane earned its fifth-consecutive trip to the state tournament with an 11-1 win in six innings over Parkersburg.

“We said we definitely wanted to get back to Vienna,” Hurricane coach Meghan Stevens said. “That’s always the goal.”

With the win, Hurricane (30-6) advances to the 2019 West Virginia State Softball Tournament at Jackson Memorial Park in Vienna where they will play at 9:30 a.m. on Wednesday against the Region I champion. Wheeling Park has a 1-0 lead in the best-of-3 series with Morgantown to determine who will face the Redskins.

As has been the case for much of the season, Caiti Mathes was the catalyst for the Redskins.

Hitting a pair of home runs and driving in six runs, including the walk-off three-run blast that sealed the region championship.

“We talked about it before on Senior Night about how it would probably be our last game, but we took it step-by-step,” Mathes said. “After sectionals, we knew we’d have another game here. It’s kind of sad, but we’re leaving a dynasty here and it’s a really awesome feeling to go away from our home field with a win.”

For Mathes, hitting a walk-off home run was almost fitting, considering the numbers she has put up in 2019. In the bottom of the sixth, the Marshall commit turned on the first pitch she saw from Parkersburg’s Kisten Roberts, sending it over the left-center field wall to send the Redskins onto the field.

The home run was the 21st of the season for Mathes, who is now batting .594 and has also knocked in 68 runs on the year.

Parkersburg got on the board with a run in the top of the fourth when Maggie Richards doubled to score Janna Yost, cutting the Hurricane lead to 5-1.

However, Alivia Meeks homered before McCray stepped to the plate and went opposite field with a two-run shot to right for her 11th of the season.

“We wanted to go out with a bang and leave what we had out here on this field,” McCray said. “All in.”

Hurricane jumped out to a 3-0 lead just three batters into the game when Mathes waited back on a change-up from starter MaKenzie Riddle and connected on her first home run of the day and 20th of the year.

Parkersburg decided to walk Mathes in her next plate appearance, but McCray followed with a sacrifice fly to right to advance runners before Dunlap added a two-run double to push the lead to 5-0.

Parkersburg coach Jason Roberts credited the top of the Hurricane lineup for its production.

“They are four of the best hitters in the state for a reason,” Roberts said. “We’re pitching MaKenzie and it’s the third year in a row pitching to the same team and the same hitters, so they eventually get used to it. Caiti Mathes is the best hitter in the state, in my opinion.”

While Mathes has put up numbers, Hurricane coach Meghan Stevens credited McCray and Dunlap for producing at a level that forces the opposition to continue to pitch to the state’s leader in home runs, saying it is vital to the Redskins’ success.

“We think they are definitely the best 3-4-5 hitter in the state with that punch,” Stevens said. “Tay protects Cait and Zoey protects Taylor and they take that very seriously. That’s senior leadership, and they’ve put this team on their backs.”

For Parkersburg, the season ends at 19-12 with another trip to the regional finals, which is both a blessing and a curse for Roberts.

“Parkersburg never won too many sectionals before a lot of these girls got here, but five or six years ago, that turned,” Roberts said of the sustained success for the Big Reds. “We’ve just never been able to get past Hurricane. They’ve always been tough – I know most of those kids through summer ball – but it gets frustrating. We’re tired of losing to them.”

In addition to the production of the three seniors, Hurricane got a 3-for-3 effort from Lindsay Phares, who reached base all four times at the plate and scored three runs.