CLASS A REGION I SOFTBALL TOURNAMENT: GAME ONE: Central holds off Rebels

Special to the News and Sentinel 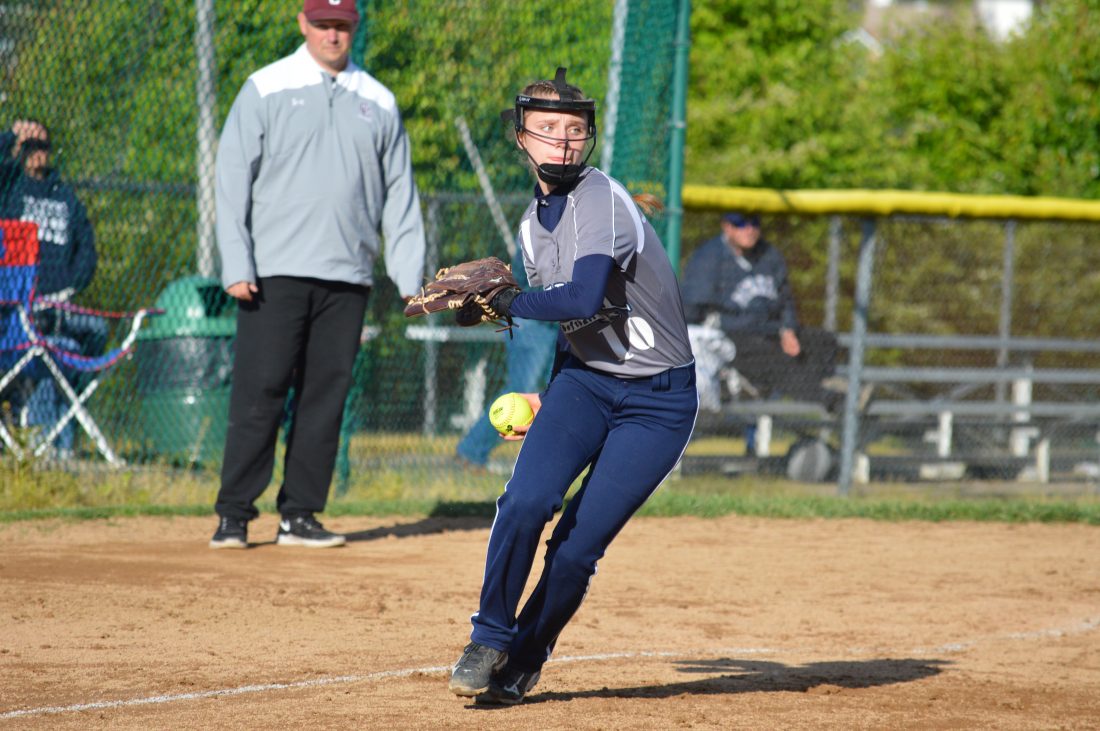 ELM GROVE — Close games with much at stake don’t build character; rather they reveal it.

Sophomore hurler Kyla Tharp and her Wheeling Central teammates exhibited plenty of character with their Class A regional tournament opener on the line Tuesday afternoon. As a result, the Maroon Knights held on for an exciting 2-1 nail-biting win over a solid Ritchie County outfit at the I-470 J.B. Chambers Complex.

A Central win propels the Knights to the state tournament in search of a fourth consecutive WVSSAC championship. Should Ritchie prevail, a third and deciding game would be played at J.B. Chambers on Thursday.

Trailing 2-1 entering the seventh, Ritchie County made matters quite dicey for the hosts.

Sara Goff reached on an error and moved to third on a single by Lillie Law. A base-running error proved costly to the Rebels as Goff attempted to score on a wild pitch. However, Central catcher Jaden Thomas quickly gathered the ball and flipped to Tharp for the tag.

Law advanced to third on the play. Chaslyn Jones coaxed a walk and subsequently stole second. Tharp, now facing the top of the order, showed her moxie by inducing a short popup to right field followed by an easy pop to second, sealing the Maroon triumph.

Ritchie lost a chance to tie the game in the sixth, only to see another base-running blunder prove costly. The Rebels had runners on second and third with one out. McKenzie McComas flew out to right, bringing in the apparent tying run.

The third base umpire, however, ruled the runner left early, ending the inning and preserving the Maroon Knights’ lead.

“It was the correct call. She left early,” Ritchie County coach Dave Mossor admitted. “We made way too many mistakes today, especially running the bases.

“We are playing six freshmen but that is no excuse,” he added. “We played very tentative today.”

Tharp was sharp from the circle. She yielded just three hits while fanning five and walking four.

“When things get tight this team has a way to get of of trouble,” Tharp said. “It is not just one player, it is our entire team.”

Ritchie sophomore Chloe Elliott was the tough-luck loser. She struck out 11, walked just one while scattering six hits. She deserved a kinder fate.

The Rebels drew first blood, tallying its lone run in the initial frame. With one out, Kayla Holbrook struck out but reached first on a passed ball. A wild pitch and two more passed balls had Holbrook touching the plate.

Central pushed across both of its runs in the third inning, courtesy of two-out lightning. Speedy Jairika Baylor tripled off the right-center fence. She scored on a passed ball.

Thomas kept the rally going by coaxing a walk. Tharp singled and Allie Davidson delivered what proved to be the game-winner with an RBI single.

Central had a golden opportunity to add some insurance in the sixth inning. Kaitlyn Ferns opened with a single and moved to second on a Peyton Knight bunt. After a strikeout, a Rebel error placed two runners aboard. Elliott was up to the test by recording a ground-out.

“Usually it is our bats that make the difference. Tonight it was definitely our defense,” Wheeling Central head coach Buck Davidson said. “We need to put the ball in play more. Our bats weren’t working real well tonight.

“We beat a good team in Ritchie County with a very good pitcher,” he added. “It wasn’t the prettiest of wins but we will take it.”

Ritchie County left runners on base in every inning but the third.

All told, seven Rebels were stranded. Mossor minced no words about his team’s performance.

“We played like crap. They had a pitcher throwing just 52-53 and we could only pop it up,” the veteran coach vented. “We can play much better than we showed today. Elliott pitched a good game.”

Ritchie County fell to 19-11 on the year. Central, with just one senior on its roster, improved to 12-7.