Believe it or not: Starcher, Ripley girls repeat as Class AAA champions

Photo by Jordan Holland Ripley’s Olivia Miller flies over the bar during the Class AAA state track and field meet Saturday at Laidley Field in Charleston. Miller captured an individual state championship in the event as the Viking girls repeated at the team champion.

Going into Saturday’s final event — the 4×400 — at the state track meet, the Vikings trailed Wheeling Park by two points.

However, the quartet of Kaynah Baldwin, Cassidy Miller, Allison Fields and Tori Starcher set a new state meet record of 4:01.64 — breaking Ripley’s mark from 2017 — and when WPHS finished third, the Jackson County squad had successfully defended their title by virtue of an 82-80 victory. 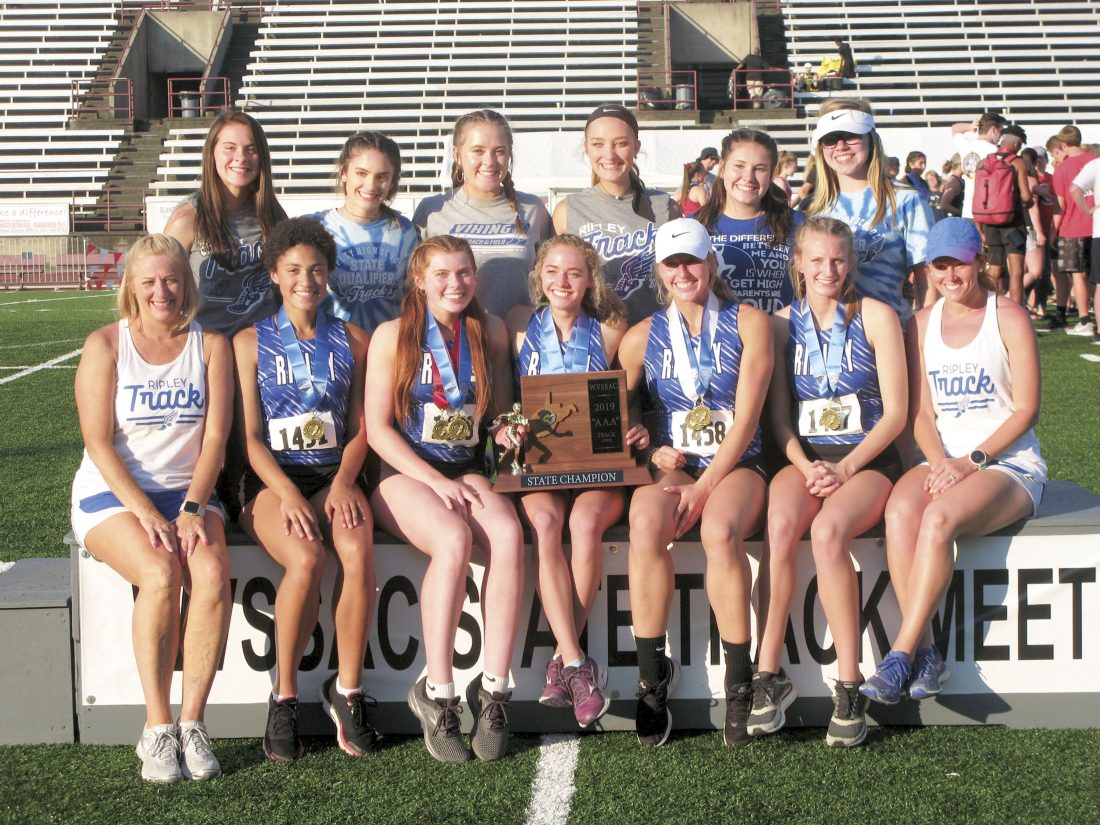 Ripley's girls' track and field team proudly defended its Class AAA state title with a victory in the 4x400 final Saturday at Laidley Field in Charleston.

“Coming in we knew we were capable of a better time (in the 4×400) and that’s what we did. Ripley’s never been a big name for track and field. We definitely wanted to go for the win. It was a bittersweet finish (state runner-up) and the past two years we knew what it was like to lose.”

“I PR’d yesterday,” Fields said of her top qualifying time in the 100 where she went 12.34. “I was very nervous. Nerves make me run better so it’s good. I was like hopefully I could run like I did yesterday.”

Although a high jump champion a year ago, Ripley’s Olivia Miller had to settle for a third-place showing in the event this year after clearing 5 feet, 2 inches.

Locked into an all-senior battle with Wheeling Park’s Brady Browning, Miller ended up being the first to clear 10 feet, 6 inches, which allowed her to claim 10 points and a top of the podium finish in the pole vault.

“It kind of came down to misses and she’s an awesome vaulter and everything, but I almost had 11 (feet) and I wish I could’ve got it, but it was a new pole I’d never used before,” Miller admitted.

“Everyone has been doing great. This (state meet) is really all that matters. I do a lot better in the warmth.”