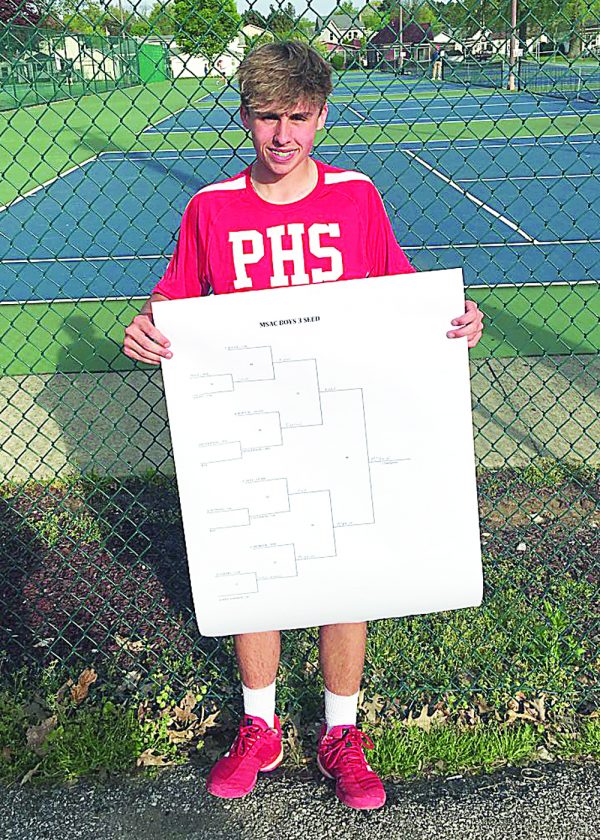 PARKERSBURG –Two weeks ago, Parkersburg High’s Nick McBride and George Washington’s Azeem Khan played a marathon match eventually won by Khan. After McBride recovered from a 7-1 deficit, the Patriot won a tiebreaker in an emotional victory.

The duo met again in the Mountain State Athletic Conference’s No. 3 singles championship match Wednesday at Parkersburg’s City Park. Neither budged from the beginning as they battled to a 7-7 tie after 14 games. The match lead changed hands four times until the knot up.

“I wasn’t too nervous,” said McBride. “I knew if I stuck the match out I could finish it today as long as I stayed cool and kept my shots in.”

Khan appeared poised for a second victory after he went up 8-7. He won a huge game after seven deuces where he kept forcing McBride to hit lobshots he buried into the fence. McBride though stayed cool and broke Khan on a double fault in the 16th game. He then recovered from a 4-2 deficit in the tiebreaker for a 7-5 win.

“I knew as soon as the last match slipped through my fingers I had to pull this one off and get it (the win) under my belt,” said McBride. “And yes we can call this a rivalry and I look forward to seeing him at states.”

The Big Reds’ victory snagged one of just two championship matches away from the Patriots’ clutches following 42 qualifying matches, and a one-day rain delay.

However, the Patriots won the war. Conference supremacy belonged to the GW boys after a 17-14 team victory over PHS.

Despite George Washington’s talent, coach Taylor Dixon was adamant the reigning state champions’ expectations weren’t set at everyone advancing to the finals.

The Cabell Midland and Hurricane girls followed suit as they entered the final match of the day tied up. If Cabell’s Kylie Fisher dealt a setback to Huntington’s Sophie Argawal, the Knights would be champions.

Of course Fisher didn’t know this heading into the match, which might have been for the best. The Highlander and Fisher battled through 16 games with each taking eight, forcing a tiebreaker. Championship time proved right for the Knight as she emerged with a 7-4 victory as Cabell edged the Redskins by one point.

“I had the points a little different but it doesn’t really matter. I am just glad we won and it is over with and now we move on to the regionals,” said CM coach Cynthia Machmer.

The region stays just as tough as Hurricane, PHS and Huntington are all in Class AAA’s Region IV. Machmer definitely liked the warmup before the most important matches of the season to the point. The crucible to earn a ticket to the state tournament begins on the same courts a week from today.

“This is probably the best springboard they could have had,” said Machmer. “Some of them played tentatively and got tight. This will teach them to go out, play loose, have fun and good things will happen.”

Though the Highlander boys finished third behind PHS and GW, boys’ No. 1 singles competitor J.J. Mercer achieved a special moment with his fourth consecutive MSAC title.

He captured five straight contests from GW’s Anthony McIntosh, who he has met in the state final the last two years, after leading just 3-2 after five games. This was the only other title match the Patriots didn’t win on the boys side.

“It means a lot,” said Mercer. “There are only a few people who have one four in a row so to join that means a lot to me. It is a special day.”

After watching his sister accomplish the feat, he wanted to be in her presence. Now he is as he heads into the regional and state final looking for two more four-peats.

“That is the plan,” said Mercer.