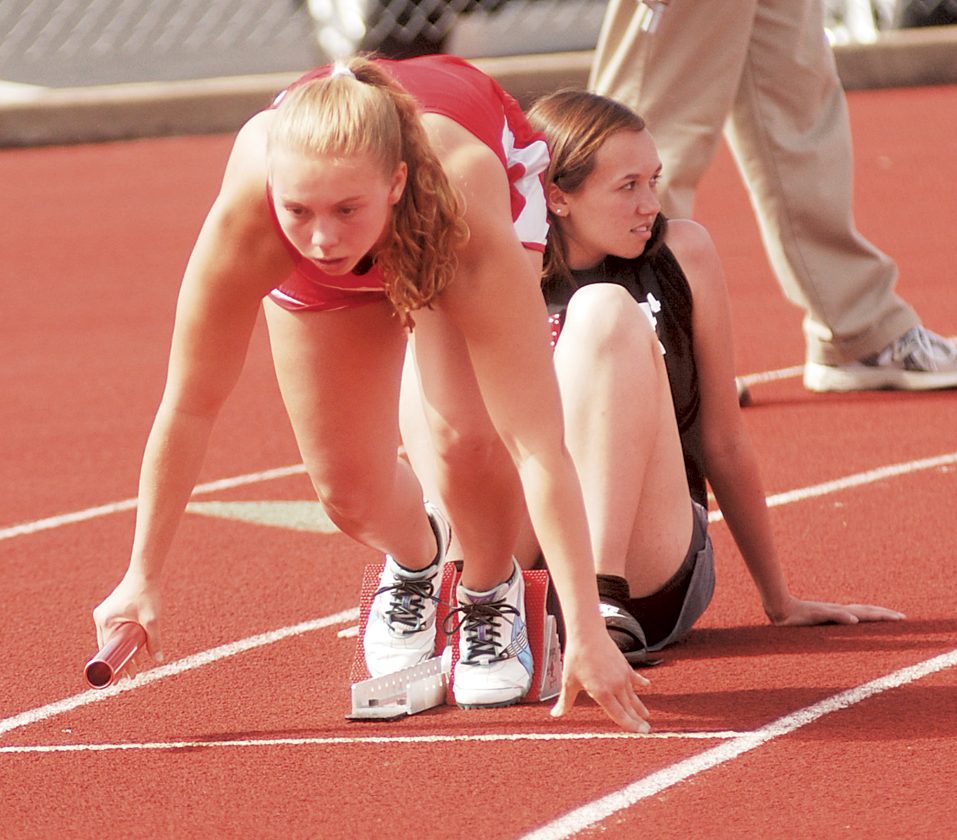 Photo by Jay W. Bennett Parkersburg High School’s Jaden Garner, who finished third in both the shot put and discus, comes out of the block in the 4x100 relay during Saturday’s Russ Parsons Invitational at Stadium Field.

PARKERSBURG — Senior day was a pretty good one for host Parkersburg here Saturday at the Russ Parsons Invitational as the Big Red boys topped runner-up Martinsburg for the team title, 139-123.

The Big Red girls of head coach Lia Fleek, who were without the services of Madison Trippett, scored 80 points and finished fourth behind champion Akron Buchtel (136), runner-up Martinsburg (108) and University (92).

Buchtel, which saw its boys place third with 94 points, swept high-point honors with Damya Barker amassing 24 points for the girls and Marquel Cook leading the way for the boys with 25 points.

PHS boys head coach Rod O’Donnell watched Shane Miller sweep the throwing events with a top effort of 46 feet, 1 inch in the shot put and 143 feet, 2 inches in the discus. The red and white also had victories in the pole vault with Buddy Roberts (10-0) and in the 110 hurdles with Aaron Kupfner clocking in at 15.35, just ahead of Martinsburg’s Chelo Teneval’s 15.39.

“We made great strides this week,” admitted O’Donnell, who had Big Red Tyler Moler get clipped by Cook in the 100 (11.17 to 11.24). “We have improved every week. We’ve got a long ways to go and we’re sure as heck not discounting because we finished ahead of Martinsburg that it’s going to continue to happen.

“They have a tremendous football program and that team is made up of a lot of football players. That mentality is going to, believe me, they are not going to lay down. They are going to come back after us and they are a very good track team. They were ranked third in the power rankings and we were sixth. It’s great for today, but it doesn’t assure us one thing.”

Sophie Thompson had the lone individual top of the podium finish for the Big Red girls. She bested teammate Katie Taylor for the pole vault crown (9 feet to 7 feet).

Parkersburg’s girls won the shuttles with a time of 1:08.84 thanks to the quartet of Emily Kupfner, who was runner-up in the 300 hurdles to Barker (47.03 to 48.41), Delaney Cox, Sara Brace and Kendal Domenick. Domenick also finished fourth in the 100 hurdles and the long jump.

“We’ve had some injuries we’ve been battling,” Fleek noted. “I thought the girls did a really nice job and we had a lot of PRs again. Each week we’re getting better and better, but we can’t fill all the events right now.

“That kind of hurts us a little bit. Overall, each kid is getting better each week and that’s all you can ask for. I’m really excited that Martinsburg came down this year. It was very nice they came down here and we love Akron Buchtel. They always do a nice job.”

Jaden Garner grabbed third place for the hosts in both the shot put and discus. Big Red teammate Sofia Strobl also was fourth in the 400 behind champion Rayannah Torrence of Buchtel. The only other top four individual area placer for the girls was Caldwell’s Gwendolyn Dimmerling, who finished third in the high jump.

Aaron Kupfner wasn’t able to sweep the hurdles events as Teneval won the 300s with a time of 41.66 with Kupfner edging Big Red teammate Anthony Perez (42.43 to 43.59) for second.

Eastern’s Noah Browning breezed to the 400 title (51.03) as Ethan Rutherford of PHS was second (53.01) and Ravenswood’s Bryce Jarrell fourth.

University’s Larry Josh Edwards was a double winner in the 800 (2:01.47) and the mile (4:26.23). Locals followed the Hawk in each event. In the 800, PHS’ Anthony Bradford (2:02.37) was second. He was followed by Ravenswood’s Blake Jarrell and Bryce Jarell along with Big Reds Keegan Barnette and Franklin Angelos. In the 1600, it was Barnette (4:32.85) taking silver with Bryce Jarrell, Bradford and Angelos coming in third through fifth.

PHS also got a silver in the discus from Justin Waybright (139-8), who finished ahead of third place Jeremy Ditch of Caldwell and fourth place Jalen Brunny of Parkersburg Catholic. Ditch was third in the shot put and Brunny was fifth. Big Red Devin Elder took third in the pole vault.

Along with his pole vault title, Roberts finished third in the long jump behind the Martinsburg’s duo of champ Matthew VanDuzer (21-1.25) and Anthony Smith (20-3.25). Bulldog Doryn Smith (5-10) won the high jump with Buchtel’s Nino Jennings besting Ravenswood’s Deshone Cooper for third. They each cleared 5-6.

In the 2-mile for the boys, Athens’ Tony Tonkovich held off Parkersburg’s Benjamin Lake (9:45.66 to 9:48.37) with Blake Jarrell finishing third.

Ex-wife balks at inviting other woman to son’s graduation