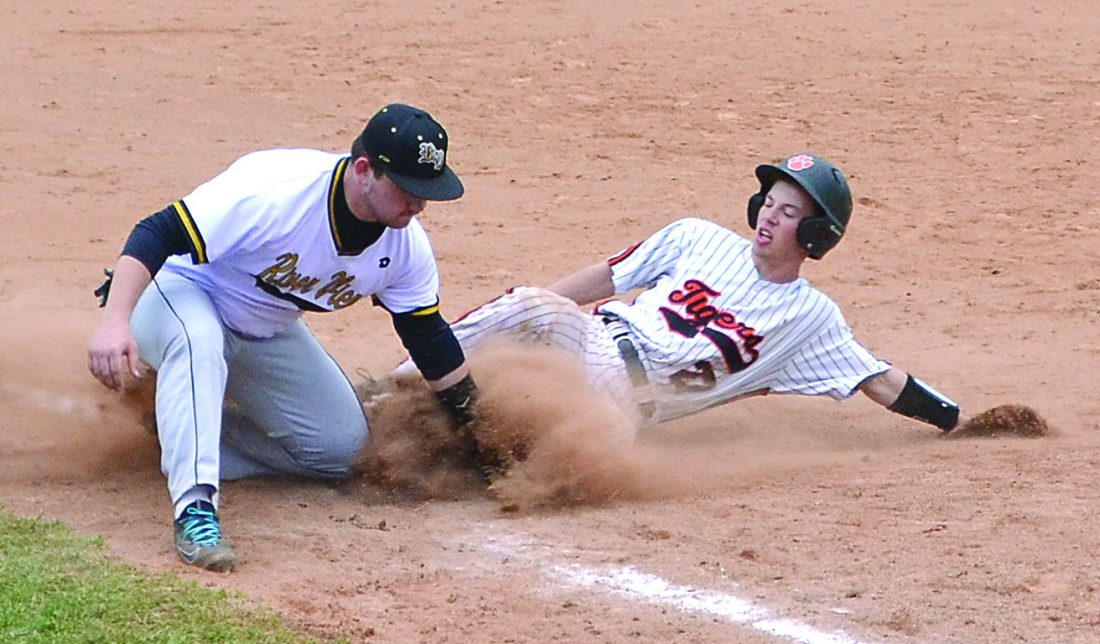 MARIETTA — Derek Duckworth’s two-run double in the last of the fifth inning proved to be the game-winner Friday night as the Marietta Tigers rallied for a 5-3 win over the River View Black Bears in an East Central Ohio League battle at Legion Field.

Marietta trailed by a run entering the fifth frame before Duckworth’s clutch two-out, two-base hit plated both Cole Alkire and Dakota Miller to put MHS in front for good.

“We’ve lost three games in the league now so we are kind of approaching the rest of these league games like they are playoff games,” said second-year Tiger head coach Josh McKitrick.

“We know we can’t really afford to lose another one to have a shot at the league title so this was a big win for us.”

The Tigers jumped out to an early lead when they scored twice in the bottom half of the first inning.

Senior second baseman Kail Hill got things started with a double to the fence in left field and came around to score when Cole Alkire laid down a bunt which resulted in a Black Bear throwing error.

Starting pitcher Corbin Alkire drew a walk and Dakota Miller singled to load the bases with no outs.

One out later Duckworth laid down a perfect bunt that rolled past the pitcher for a base hit and an RBI.

River View starting pitcher Jackson Rinkes did a great job of minimizing the damage as he worked out of the jam without any more Tiger runs crossing the plate.

Corbin Alkire allowed just two River View base hits through the first three innings but the Black Bears came out swinging in the top of the fourth to take the lead.

Dakota Williamson led off the inning with a single and moved to third when Aaron Elliott doubled to the fence in left-center field.

Riley Emig’s base hit scored the first Black Bear run and Elliott scored as well as the Tigers committed what was their only error of the game.

Alkire recovered to get Austin Bahmer to bounce into a double play with Emig scoring the go ahead run.

The Tigers went quietly in their half of the fourth before retaking the lead in the bottom of the fifth.

Cole Alkire got the pivotal inning started when he was hit by a pitch and Corbin Alkire bunted him over to second. Miller singled for the second time in the game and moved to second when the throw in from the outfield was off target to put a pair of Tiger baserunners in scoring position.

Rinkes managed to induce Tiger third baseman Jarrett Jackson into an infield pop-up for the second out of the inning but Duckworth laced a sinking line drive into right field that scooted passed a diving Ethan Guilliams to allow both Alkire and Miller to score as MHS took a 4-3 lead.

Duckworth manufactured an insurance run when the Tiger senior took off for third on a delayed steal and came into score when the throw was off the mark and got away from the River View third baseman.

“Derek did several things really well tonight … he executed the squeeze when they tried to throw a pitch out and he managed to get the bat out there and got the job done,” said McKitrick. “Then he comes up with big hit for us and steals that base which gave us a big insurance run.”

Corbin Alkire allowed a pair of Black Bear baserunners in the seventh but got the last two outs to cap another big win for the Tigers.

“Corbin is solid. We’ve come to expect it and he expects to get the job done each and every time he gets on the mound,” said McKitrick. “He throws strikes and we did well fielding the ball behind him.”

The Tigers collected seven hits in the game with Duckworth, Miller and Mark Duckworth each collecting a pair.

MHS improved to 10-3 on the season and 4-3 in the ECOL with a big battle looming Monday at conference rival Dover.

“I’m extremely pleased with the way we are playing this year,” said McKitrick. “There are a couple of games that we feel like we should have had but as long as we keep putting the bat on the ball and executing and our pitching continues to be solid I am very confident in this team.”

River View slipped to 7-6 with the loss.