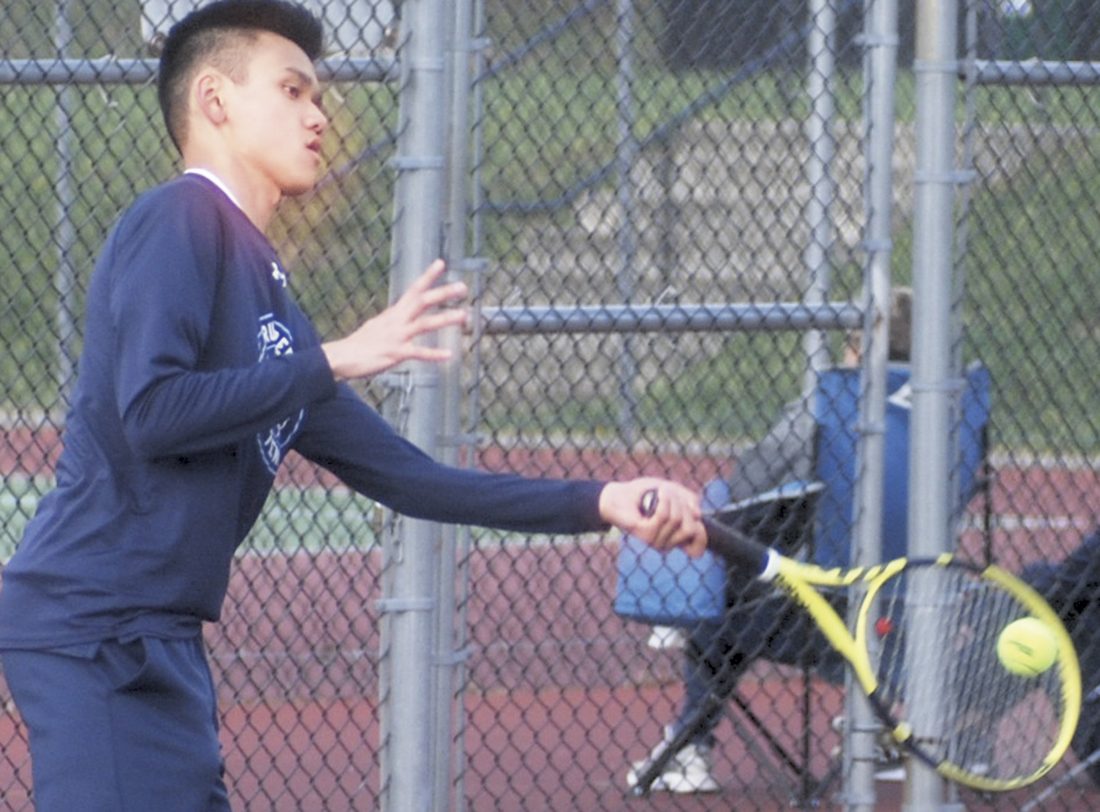 Photo by Tyler Bennett Parkersburg Catholic’s Bradon Nguyen returns a volley during a rally in during his 8-0 win over Ripley’s Tobias Scholl on Monday at Jackson Park.

PARKERSBURG — The undefeated Parkersburg Catholic boys and girls sides took care of the visiting Ripley Vikings, winning 7-0 for the boys and 5-2 for the girls Monday evening at Jackson Park.

“Both our boys and girls are undefeated throughout the season, so everyone is doing well and they want to keep the momentum going,” said Catholic head coach Jason Discini.

Discini later went on saying that he is proud of how his Crusaders have improved throughout the season.

But they still have to stay focused on ending the season strong.

“We got three to four matches ’til the regular season is over and then we head into regionals. Everyone is playing really good this year and a couple have had some ups and downs this year,” Discini said.

“But they are learning from their mistakes and their improving as we are reaching the end of the year and that’s the awesome part.”

The Crusaders’ boys made short work of the Vikings, with the only close match-up being the number three seeds. Andrew Shaw downed Jarrett Lough, 8-4.

Normally the second seed, Ben Vierheller moved up to the number one spot giving Aidan Roberts the night off.

Vierheller won his match against Caleb Bailey 8-0 after he paired with Roberts for a top doubles win over Bailey and Tobias Scholl.

“I moved some of our kids that were up and down in the lineup to get some more experience.

My number one didn’t play singles, only doubles. I moved my number two up (Ben) and he played fantastic today,” Discini said.

“I also moved Ethan and Andrew up in singles and they have been improving as a doubles team throughout the year.

I’m proud of those boys they all played well today,” Discini said.

Two seed doubles partners Stephen Nguyen and Cary Roberts won 8-0 and Lang and Shaw won by forfeit due to Ripley not having a third doubles team.

The Vikings girls had more success, but the Catholic girls pulled away in the end.

Ripley’s number one seed Lauren Roush, battling tightness in her back, had to forfeit her match with Marie Discini.

Roush was able to play with partner Toryn Scholl in the 8-1 doubles loss to Discini and Hannah Sprout.

“She toughed it out during her doubles match, but her back was tightening and she was unable to compete in the singles match, it was a shame,” Viking coach Dwayne Merritt said.

Both Sprout and Taylor Isaly won their matches 8 games to 2. Ripley picked up their only singles victory on the day, as Brooke Hatcher quickly dispatched Mackenzie Campbell in eight straight games.

“It was a good win for Brooke, for her to come on and worked during the seasons,” Viking coach Merritt said, “She has a never give up attitude and if she develops fundamentals along with that, she’ll be fine.”

Sprout and Campbell also knocked off Megan Barnett and Hatcher 8-0.

“We just need to compete and play through each and every point,” Merritt said, “We are getting better at those positions I just mentioned, it just matters of continuing to do so.”