Eagles’ Godfrey is sharp on the mound 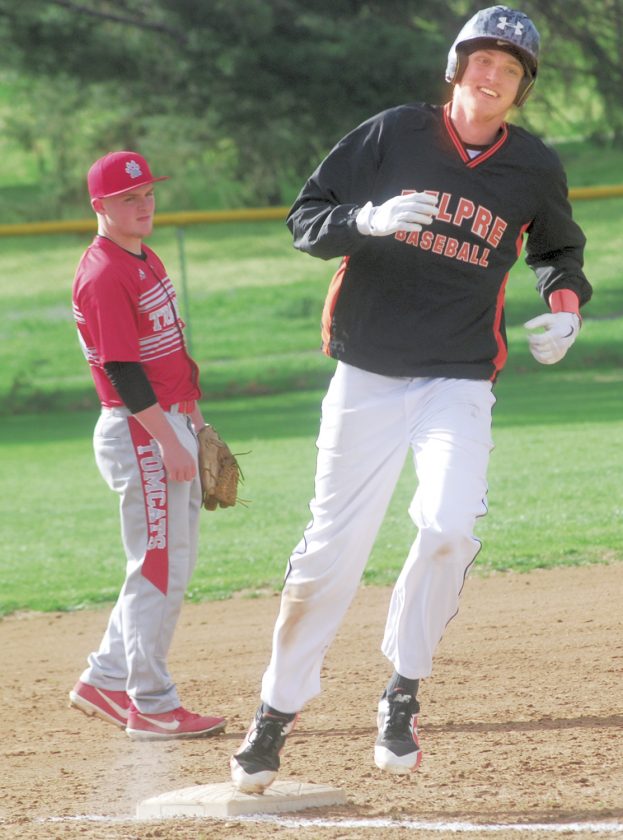 BELPRE –On a cold Monday afternoon at Civitan Park, the Belpre Golden Eagles were anything but frigid. They quickly dispatched of conference rival Trimble in five innings with an 11-0 shutout win.

Nick Godfrey pitched effectively for the Eagles, as he allowed two hits in those five innings of work. Despite giving up those two hits in the first, Godfrey got out of the jam and didn’t look back.

“Nick Godfrey just flat-out shut their bats down,” BHS coach Terry Mullen said. “For Nick, the biggest thing is that he didn’t walk a batter, so he was in complete command of the whole baseball game when he pitched.”

Godfrey took the momentum of getting out of that opening inning and cruised the rest of the way behind six strikeouts.

Following a walk and the first of three stolen bases on the day for Logan Adams, he was brought home on a hit to left by Evan Wells to draw first blood. After a bloop RBI single from Matt Bayne, Godfrey helped his own effort with a gap shot RBI double to left center. With the game quickly getting out of hand for Trimble’s Max Hooper, he had to rally and limit the first-inning damage.

Jeremiah Stitt had other ideas.

Stitt came to the plate with his warmup jacket still on, but he didn’t need it.. He scorched an off-speed pitch from Hooper into left center for his first career home run.

“We got on the pitcher early,” Stitt said following the win. “We got in his head, I thought. It was just a great team win, and everybody put the ball on the ball and put it in play.”

Stitt was correct, as his team continued to give Hooper a hard time on the mound throughout the second.

Five more runs came across, as his day was done early. Foster Brand contributed to that with a 2-run single that further busted the game open. After a run came to the plate via an error, Brand’s hit extended the lead to 8-0.

A sacrifice groundout from Bayne and liner up the middle from Godfrey accounted for the final runs Hooper surrendered, as the Eagles put the game on ice. For good measure, Godfrey proceeded to make short work out of the remaining Tomcat batters.

In the third, Landon Wisor and Cameron Kittle grounded out to Stitt at third base. Then, Godfrey got Bryce Downs to go down swinging to complete a 1-2-3 inning. More of the same happened to record the last six outs of the game, as Godfrey struck out Jack Nagucki to retire the side. He ended his dominant day getting a groundball from Wisor to cap off the five-inning affair.

Coach Mullens saw a lot from his team, and he hopes this can be a win the Golden Eagles can build off.

“We finally got hitting all the way through the lineup,” he said. “It was in the (Friday night) Eastern game. It was all in one inning when I left one of our pitchers in there too long. That was on me, and they came out from last night and played good baseball. I wish we could have done that earlier in the season, but it’s getting closer to tournament time and the end of the season.”

The Golden Eagles (5-12) travel to Chillicothe on Wednesday at 5 p.m. to take on Williamstown in a test of strength, as the sectional tournament draws closer. The Tomcats (8-4) host Waterford on Wednesday.