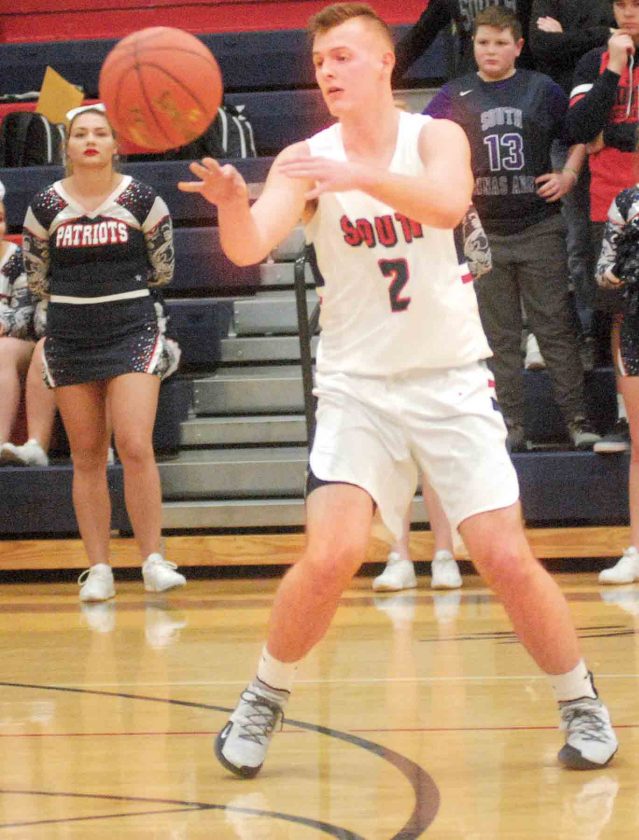 File Photo Parkersburg South’s Seth Fallon made the jump from the Class AAA all-state third team to the first team in one year. Fallon helped the Patriots back to Charleston his senior season.

In fact, the teams playing in the championship game at the Charleston Coliseum — Martinsburg (four) and University (three) — sported a total of seven players carrying double-figure averages.

But not George Washington. The defending champion Patriots, for many reasons, had to rely on senior guard Bunky Brown. And he didn’t let them down.

Brown carried the team’s scoring load and lofty expectations on his shoulders much of the season, averaging 26.4 points and nearly eight rebounds, as he led GW (20-6) to a No. 3 state ranking and a return trip to the state tournament, where it lost to Cabell Midland 64-62 in overtime in the quarterfinals. For his efforts, Brown has been chosen as the first-team captain on the Class AAA All-State team as selected by the West Virginia Sports Writers Association.

Brown was expected to rely on talented sophomore guard Mason Pinkett as his running mate this season, but Pinkett was limited to nine appearances and eight starts by two injuries to the same knee, the second of which resulted in a torn ACL in early February. That subtracted his 15.1 ppg scoring average and ended up placing the bulk of the offense on Brown. He didn’t disappoint, averaging 21 points in games when Pinkett started, and 28 in games he didn’t. GW’s next-high scoring average this season belonged to Gus Eddy (8.1).

In George Washington’s four postseason games — three against top-10 AAA teams — Brown had 30, 33, 31 and 27 points. That included 31 points and seven rebounds in a Region 3 co-final win at Woodrow Wilson.

“Coming down the stretch, he wasn’t going to be denied,” Greene said. “He was going to get us back to the state tournament and see what happens there. That stretch run was pure senior. He did everything humanly possible to get us there. I just don’t think there are very many kids who can do that. It speaks to his competitiveness and his will to win.”

Here are capsule looks at the rest of the first-team players:

Fallon — A three-year starter at point guard, he helped the Patriots get back to the state tournament with his all-around play. The son of coach Mike Fallon, he averaged 13.4 points, 6.7 assists, 5.6 rebounds and 1.9 steals and shot 83 percent at the foul line (59 of 71).

Harman — His savvy play guided the Bulldogs to the state championship game for a second straight year, where they lost to University 51-45, their first setback after going 27-0. He led a balanced attack in scoring at 10.6 points per game, along with 2.3 assists and a team-high 64 steals.

Meredith — He finished second to Brown in scoring in the Mountain State Athletic Conference at 23 points per game, and also averaged 7.5 rebounds and 2.6 assists. Meredith raised his scoring average a full nine points per game from a 14.0 ppg mark as a sophomore.

Metheny — As a super-quick point guard, he was one of the big keys to University’s first-ever state title, averaging 23.5 points and 6.1 assists during the season. In the Hawks’ three-game state tournament run, Metheny averaged 20 points, five assists and five steals.

Radford — One of the top pure shooters in the state, he racked up 50 points against First Love Christian (Pa.) and 45 against Bluefield, two of the top single-game efforts for any West Virginia player this season. He averaged 21.7 points and sank 76 3-pointers for the Flying Eagles.

Selders — At 15.7 points per game, he was the top scorer this season for a Mohigans team that beat University in the sectional finals en route to reaching the state tournament. In the quarterfinals, Selders had 12 points, seven rebounds and three assists in a loss to Capital.

Vargo — He was the leading scorer (18.9 ppg) and rebounder (9.2) for a Patriots team that faced a grueling schedule that included nine games against AAA state tournament teams, plus two other AAA top-10 opponents and games against strong Ohio and Pennsylvania teams.