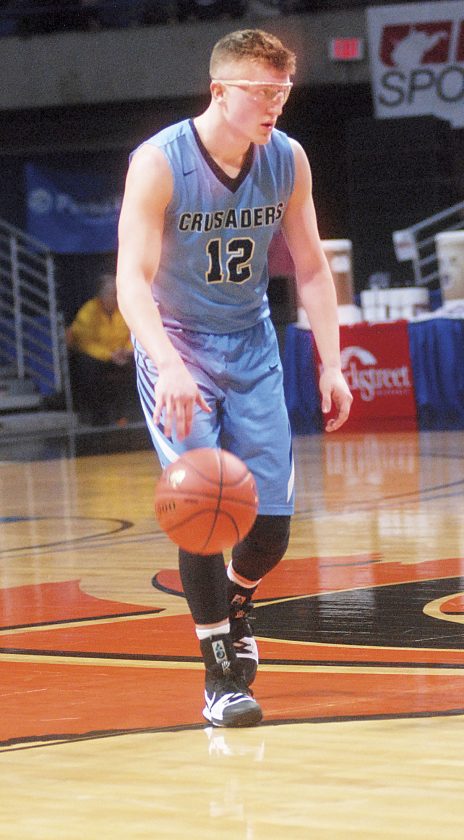 Photo by Jay W. Bennett Parkersburg Catholic’s Cade Ullman brings the ball up the court against Wheeling Central in a Class A state semifinal. Ullman was named captain of the all-state first team as voted on by the West Virginia Sports Writers Association Tuesday.

CHARLESTON — Fresh off a historic run to the state championship, Webster County leads the way on the Class A all-state team with a pair of first-team selections in Dorian Groggs and Tyler Gray.

Parkersburg Catholic’s Cade Ullman was chosen as the first-team captain for the all-state team which was released Wednesday by the West Virginia Sports Writers Association.

Groggs and Gray were two key reasons the Highlanders finished with the school’s first-ever state title and the state’s first-ever 28-0 record. Groggs averaged 20.0 points per game as well as 2.7 rebounds, 4.2 assists and 3.1 steals. Gray, in addition to drawing the task of defending the other team’s best player, averaged 16.0 points per game with 5.0 rebounds, 5.0 assists and 5.0 steals.

“Dorian and Tyler worked their butts off,” Webster County coach Michael Gray said. “They are the type of players that get in the gym on Saturdays and Sundays and do whatever it takes. They are a big reason why we got to this point in the season.”

“Class A is so deep in talent right now,” Parkersburg Catholic coach Rob Strcula said. “Being named the captain of the all-state team is an absolute honor.

“Cade is very deserving of it with what he has accomplished the past two years, especially this year. You don’t normally put up the kind of points he does and be as efficient as he is when you are being double-teamed and seeing triangle and two’s and box and one’s. I think he proved he’s one of the best players in the state.”

Zummo helped the Fighting Irish reach the state tournament for the seventh straight season and a 21-5 record after averaging 21.0 ppg as well as 9.0 rpg and 4.0 apg.

Williams finished the season with a scoring average of 24.5 ppg.

Tolsia freshman Jessie Muncy is the third-team captain after averaging just below 20 points per game for the Rebels.