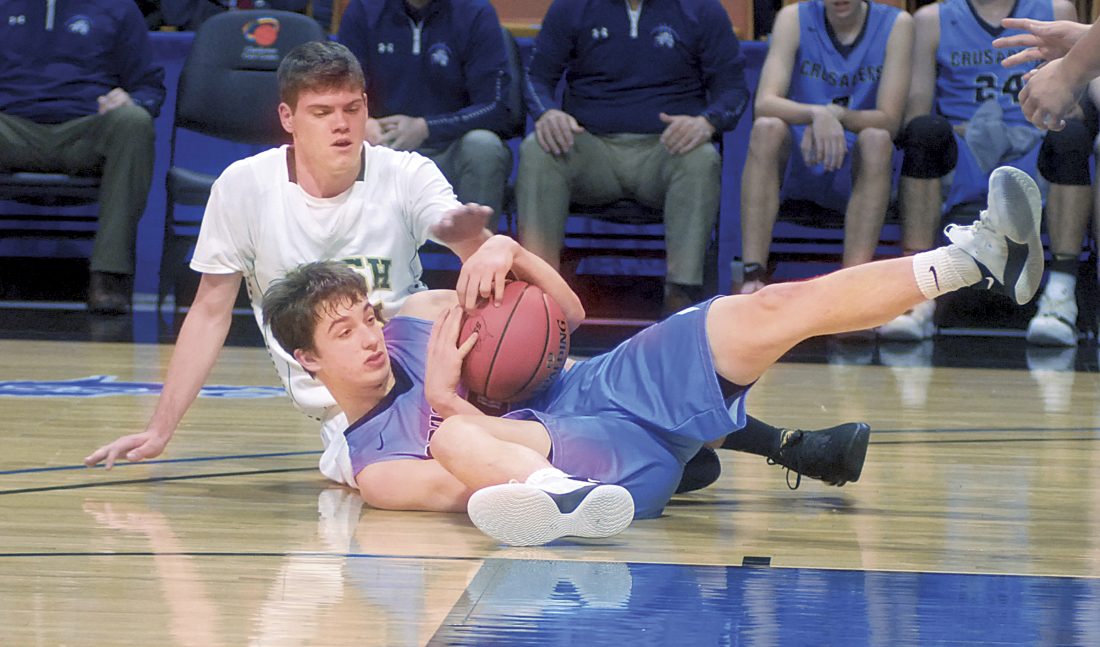 CHARLESTON — After falling to Notre Dame twice in the regular season, Parkersburg Catholic finally found a way to beat the Irish.

It couldn’t have come at a better time, as the sixth-seeded Crusaders knocked off third-seeded Notre Dame 58-56 in Wednesday’s Class A state quarterfinals at the Charleston Coliseum and Convention Center.

Cade Ullman surged for a game-high 33 points and the Crusaders held Notre Dame to 36.7 percent (18 for 49) from the floor in the victory. Ullman, a sure-fire first team all-stater, shined on the big stage, going 10 for 22 from the floor and 6 for 10 from 3.

“It means a lot come out here and beat a good Notre Dame team and play well,” said the Catholic senior. “I’ll do anything to help this team. Obviously today I went out and hit shots, but (my teammates) got me open and ran screens. All the credit to them. Hopefully we keep it up.”

“They’ve had our number for awhile,” said Parkersburg Catholic head coach Rob Strcula. “Notre Dame’s played really well against us and we haven’t played well against them. We felt like if we kept it close early on, we could put ourselves in position to win.”

Pat Copen added 12 points and nine rebounds while playing sound defense on Notre Dame standout Gabe Zummo, who finished with an 11-point, 14-board double-double. Zummo started the game 1 for 14 from the field and finished 4 for 18.

“All the credit goes to Pat,” Strcula said. “We really wanted to try to take (Zummo) out a little bit and Pat’s length really helped him guarding Zummo today. Zummo is very, very intelligent. He does a great job of reading his defender and how he comes off screens. I thought Pat did a great job of just, if he did get beat, recovering and keeping the ball in front of him.”

For Catholic, Ullman and Copen did the bulk of the scoring, but Ty Sturm added four points and eight boards while playing in foul trouble. Jeb Boice netted five points and a team-high four assists. Strcula noted it was a total team effort.

“Ty’s our leader out there,” the coach said. “He’s our leader by example and he’s our vocal leader. He does a lot of things that go unnoticed that you don’t see in the stats sheet. Not having him in the game (with foul trouble) worried us a little bit. But I thought Wade Smitley played well and gave us some good minutes, and so did Peyton Amrine and Xavier Collie. Those guys filled in and did a good job.”

Sturm’s layup with 14 seconds left in the first quarter gave Catholic a 9-8 advantage.

The biggest lead for the Crusaders in the first half was eight, 24-16, after Amrine knocked down a 3-pointer with 1:13 left in the second quarter. Helm answered with a pair of foul shots before Ullman drove for buzzer-beating layup to make it 26-18 at halftime.

“That play right before halftime was huge for us,” Strcula said. “We had a little bit of momentum going into the second half.”

The Crusaders scored the first six points of the fourth period to go back up by 11. Notre Dame trimmed the lead to two, 55-53, after West’s two free throws with 33 seconds left in the contest. Jalen Brunny’s foul shot made it a three-point game, and West’s potential game-tying 3 was off the mark. Freebies by Ullman and Copen made it 58-53 with eight seconds left, and Notre Dame could only muster a 3 by West at the buzzer to get to the final score.

“Give Parkersburg Catholic all the credit,” said Notre Dame head coach Jarrod West. “They came and executed their tempo in the first half. Basketball is a make or miss game, and in the first half we couldn’t make any shots. We allowed Cade to get going and score 33 points. Second half we fought back and got back into it but just didn’t have enough juice to finish it out.”

Strcula said the team’s objective was to control the pace and keep Notre Dame from running.

“The goal was to keep it in the 50s,” he said. “To hold Notre Dame to 56 points with what they’re averaging is pretty impressive. We knew we had to play our pace and control the ball.”

As a team, the Crusaders handled Notre Dame’s pressure well.

“We only had 11 turnovers against a good defensive team with the kind of ball pressure they put on us,” Strcula said. “I was impressed with our composure and poise tonight.”