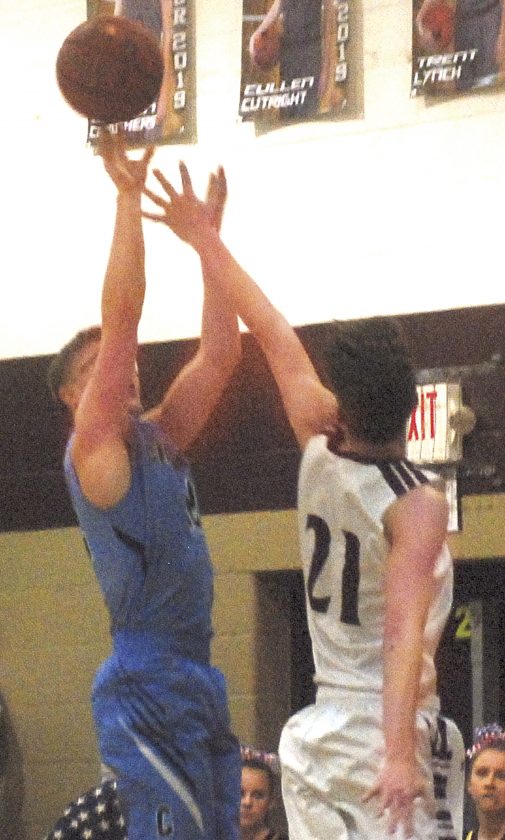 Photo by Jay W. Bennett Parkersburg Catholic’s Cade Ullman, pictured here shooting a jumper against Williamstown’s Eli Inman on Friday night, pumped in 28 of his career-high 43 points in the second half — 14 in each of the third and fourth quarters — to help the visiting Crusaders erase a 10-point halftime deficit and register a 72-58 triumph versus the host Yellowjackets.

WILLIAMSTOWN — Parkersburg Catholic senior Cade Ullman put on a mesmerizing performance here Friday night in front of a packed house, scoring 28 of his career-high 43 points after halftime, as No. 8 Parkersburg Catholic knocked rival and No. 3 Williamstown from the ranks of the unbeaten with a key 72-58 Little Kanawha Conference West Division victory.

Head coach Rob Strcula’s Crusaders, who improved to 5-3 overall and 5-0 in the LKC West, received a buzzer-beating halfcourt heave from Ty Sturm to trail just 13-12 after one.

The Yellowjackets dominated the second quarter and led 37-27 at intermission, but that cushion quickly evaporated as Ullman tallied 14 points in the third to help push the Crusaders to a 51-42 lead.

“I mean it’s a very exciting game,” admitted Ullman, who grabbed four boards and had a game-high four steals while adding when asked if he felt anything particular going into the contest “it was just another game.

“I didn’t know what was going to happen. Obviously, I’m excited for it. It was fun to be a part of and do something like that, just exciting.”

Cullen Cutright, who led the hosts with 13 points and seven rebounds, opened the second quarter with a three-point play. After Eli Inman had a lay-in for part of his nine counters, Trent Lynch (11 points) canned two trifectas and then Xavier Caruthers (eight points) hit from deep as PCHS found itself trailing, 29-16. A Baylor Haught assist which resulted in an Inman lay-in capped the first-half scoring.

Ullman started it with the third of his five 3s thanks to one of Jeb Boice’s game-high six assists. Patrick Copen, who was in serious foul trouble all evening, then scored his only bucket of the game. After that, Ullman proceeded to can six foul shots while Sturm scored off an inbounds pass and added a three-point play following an offensive rebound. Ullman’s layup gave PCHS the nine-point cushion entering the fourth.

In the pivotal third, ‘Jacket head coach Scott Sauro watched his team commit seven turnovers while going 2 of 6 from the floor.

Any question as to how the game was going to go in the final eight minutes was answered swiftly.

Ullman drained a deep left-wing triple to open the fourth just 17 seconds in. Despite PCHS getting a pair of shots blocked in the paint by Cutright and Inman, Crusader Jalen Brunny grabbed an offensive rebound and kicked it to an awaiting Ullman in the corner, who naturally was nothing but net with his shot to make it a 15-point bulge at 57-42.

“When I get to the free-throw line like that, like I did in the first half and hitting those mid-range jumpers and just getting my shot going, I knew my shot was going to be feeling pretty good,” said Ullman, who went 14 of 14 from the charity stripe as PCHS converted 22 of 23 overall. “My teammates, they just kept looking for me and looking for me and hitting me with open shots.

“It was just nice to know they just wanted to keep feeding me. (At halftime, coach) just told us to keep playing our game and quit playing at their pace, come out fast and they didn’t know what to do and we just ran with it from there. When we play well together, we play well. There’s not a team out there that can beat us when we’re playing like that.”

Sturm finished with a double-double thanks to 16 points and a game-high 12 rebounds. Boice added eight markers as PCHS returns to action this afternoon when Wirt County invades for a 1:30 p.m. junior varsity start.

Williamstown will look to get back on the winning track when it plays host on Monday to Calhoun County.