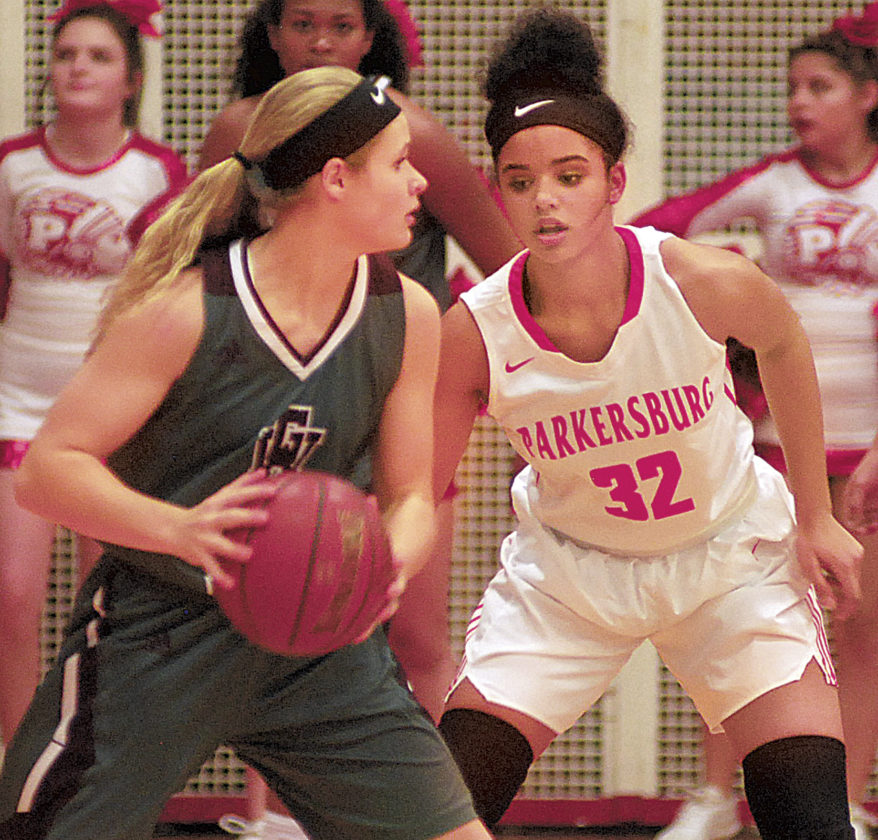 Photo by Joe Albright Parkersburg High’s Bre Wilson guards George Washington’s Katy Darnell during a 2017-18 regular-season matchup. Wilson, who tore her ACL in a state semifinal in March, is two months away from returning to the court. She will be a deadly mid-season acquisition for the reigning Class AAA state champion Big Reds.

PARKERSBURG — Parkersburg High guard/forward Bre Wilson’s recollection of the action sequences as she went in for a layup against Parkersburg South four minutes into the third quarter of a Class AAA state tournament semifinal last March is non-existent. Events quickly flew by as the city rivals battled for a chance to hoist the state championship trophy the following night. The sophomore fully entrenched in the rivalry she has participated in the past seven games over the last two seasons up until this moment. She wouldn’t see the court the remainder of the second half. Her right knee crumpled on the drive to the basket before she fell to the floor in serious pain. Her cries signaling an atypical injury to those in attendance at the Charleston Civic Center. Wilson knew the non-career-threatening injuries well enough. Wyoming East guard Gabby Lupardus accidentally poked her in the eye late in a game earlier in the 2017-18 season. She entered the same season with a stress fracture in her back. Earlier still, she endured an ankle injury in the Big Reds’ regional final win over Spring Valley the previous campaign. This was a kind of pain she thought she would never experience as she was helped off the floor, later confirmed as a tear of the Anterior Cruciate Ligament during an MRI. Her season over along with the next seven or eight months of her basketball career hitting the pause button. “It was scary,” said Wilson upon recollection. “I never thought this would happen to me. To go down right before the state championship game, it was hard not being able to play. It was good in the end because we won and it made me feel better.” “I asked why do I keep getting hurt,” she said with a small chuckle. PHS miraculously raised the Class AAA state championship trophy after a final-game record 34 turnovers. Scott Cozzens’ team clearly needed one of its best ball handlers, but her intervention wasn’t meant to come against Buckhannon-Upshur. “It was difficult,” said Wilson on being a spectator. “I was always out there playing and had never sat on the bench for an entire game like that knowing I couldn’t do anything to help.” Her contributions weren’t forgotten however in the elation of the post-game mayhem. Life-long friends and teammates Maggie Richards and Maddi Leggett made sure Wilson participated in the celebration. The trio enjoyed a long celebratory hug forever commemorated in a blanket gifted to each of the participants in the off-season. “It was really good to have them come over and hug me during the celebration,” said Wilson. One final party before the long arm of rehab reached into her life and grasped this past summer until January of the upcoming season. Times were hard in the beginning as the knee learned how to run, jump and walk for the second time in her life. Wilson never gave up hope she would return to the floor. A summer traveling with her Amateur Athletic Union basketball teammates on the West Virginia Thunder, Eden Gainer and Madi Mace, to their events and cheering them on fueled her. No matter how painful the sight of her friends playing the game she loved was to her eyes. “I needed to be their because I had to be around the game,” she said. “I wanted to watch them play and cheer them on.” The thought of her final AAU season next summer acted as another catalyst. “I want to make it my best,” said Wilson. All the travel and tournaments took place between physical therapy visits where Wilson experienced zero setbacks. Full range of motion returned to the joint, and she can make all the moves typical to her game pre-injury. There are zero mental hangovers as well. Of course the physicality of in-game action could provide an obstacle, especially PHS’ special brand of defense, but Wilson is prepared to cross the bridge. More of a draw-bridge really as Wilson has two months of rehab left on the slate. She could come back at the beginning of the season, but doesn’t want to rush anything by risking a repeat injury, instead being a deadly mid-season acquisition type of player in January. While fans can expect to see the same type of lane disrupter from her first two seasons, don’t be surprised if you see her pull up for a jumper once in a while. Wilson added the shot to her repertoire after a daily regiment of 500 then 1,000 made shots in the offseason. A lot of those form shooting as she didn’t have the use of her legs. A weapon most opposing teams don’t want to see added to a stacked Big Reds’ unit. Her father, Phil, also believes she added another skill to her game following the injury – Improved court vision. “Now she is actually seeing things we (Wilson is a member of the Big Reds coaching staff) have been telling them to see .. Gaps … Lane lines… Drive lanes and passing routes,” said Phil. “Now she is seeing all these things and we are hoping it transfers over.” Wilson hinted she would act as a bench coach to a group of talented freshmen who are expected to contribute fast, before she takes over as one of the Big Reds’ leaders on the floor. “I can’t wait to start playing again,” said Wilson. “I am already counting down the days until my first game back.” Opposing coaches are too but for different reasons.