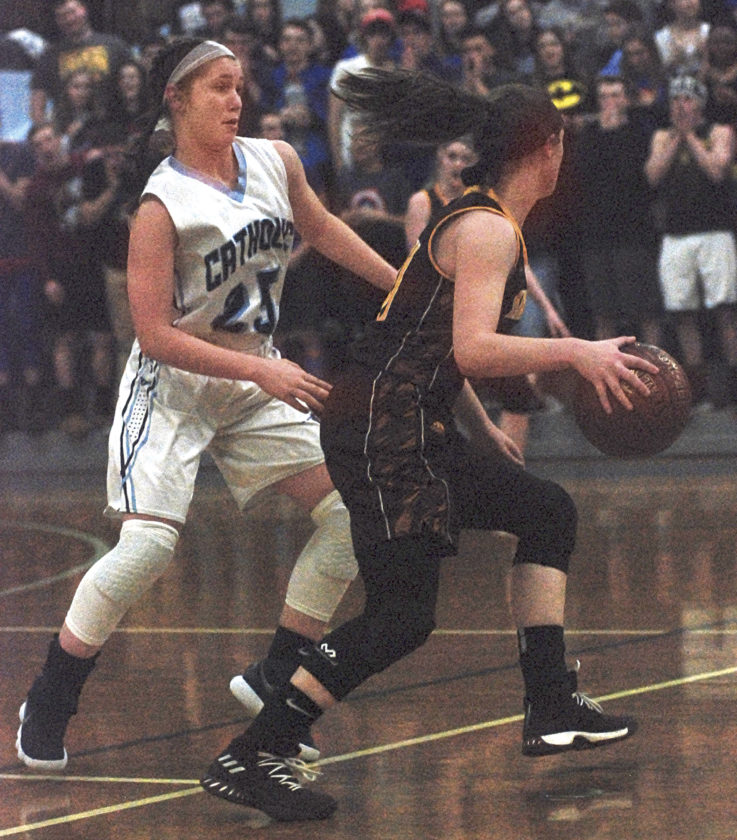 Ironically, Kurtz’ words to me after the title game were “We slayed the dragon, man.”

Fueled by the 40-37 loss to the Irish in the same game her freshman year, senior Taylor Duplaga led her troops in a brawl. Defensive wiz Riley Bennington aided in the 67-62 effort. The battle was intense with neither group able to make a significant impact on the lead margin much of the morning.

Fans and teams in attendance saw in the celebration Duplaga’s heart beat for the entire team. Teammates swarmed her on the court during the party. Neither Bennington nor Duplaga replace easily which is why the Irish take the top spot in the first poll.

This fact and Irish coach Shannon Lewis returns a trio of Division I talents and all-state first-team selections in Chattanooga signee Dena Jarrells, Marshall commit Paige Shy and undecided Bailee Adkins. Who can argue with this fortune?

Central though possesses the talent for the No. 2 spot. Eden Gainer should play D-I basketball if she chooses to after her senior year. Kaylee Reinbeau’s fundamentally sound on-the-block game provides a player capable of bumping shoulders inside all night long, while Hannah White consistently hits shots from outside the arc.

The Knights aren’t hurt by the fact Kurtz remains the leader either. One of the best coaches in the state knows what buttons to push and how to get the most out of his young ladies nearly every season.

A new challenger to the throne approaches in the No. 3 team. Like the Knights, they are clad in suits of armor. Marty Vieheller’s Crusaderettes may be poised for what I call “The PHS leap,” going from a first-round state tournament exit to the state title game in one season, in year two under the leadership of guards Madeline Huffman and Aaliyah Brunny.

This duo pushes their teammates improvements every day in practice. A growth visible through out last year as Huffman, who led the team in scoring over the opening games, started differing to her teammates who earned those shots. Her 8 assists per game proved the right decision more often then not. Brunny scored too but her value shone on the defensive end of the court.

Her long limbs forced guards into uncomfortable passes that resulted in turnovers and fast-break opportunities.

Catholic’s running wears teams down and may get worse in 2018. Four abled freshman along with Jenna Boice, Madison Ross and Emma Gardner provide athletic “thoroughbreds” to use coach Vierheller’s word capable of havoc on both ends of the floor.

Two public schools break through in the final two spots of my Top 5 in Magnolia and Williamstown.

Although tape exists now on the Blue Eagles’ duo of Kyndra Pilant and Mady Winters, head coach Meredith Pilant had an entire offseason to adjust to this fact. Kyndra provides protection for Winters because she isn’t just a big, but a ball-handler, scorer and facilitator. Opponents able to stop both won’t come around every night on the schedule either.

The biggest need for Magnolia, and the reason they aren’t higher on my list, comes in the need for an established or consistent third and possibly fourth reliable player on the floor. A player in the mold of an Emily Jedamski or Carly Somerville the year Gilmer County won the title being a great example.

Someone who can hit outside shots and pull the defense away from the block makes a world of difference for the Blue Eagles. I know I just said Winters and Kyndra compliment each other, but there are going to be nights where teams can throw defenders at both players.

Williamstown uneasily secured the No. 5 spot after an injury left question marks at point guard. Keely Alsup’s PCL injury leaves her unavailable for the first two months of the season, and Fred Sauro without a heavily-seasoned rotation player. Alsup scored from behind the arc, but she could penetrate as well. Her driving ability left open for easy shots around the rim Bethany Arnold and Mara Rinehart.

Nicole Reynolds and Taylor Newton must raise their games in her abscence.

I think they will as Sauro’s group continues growth from last season’s surprise run to a regional co-final.