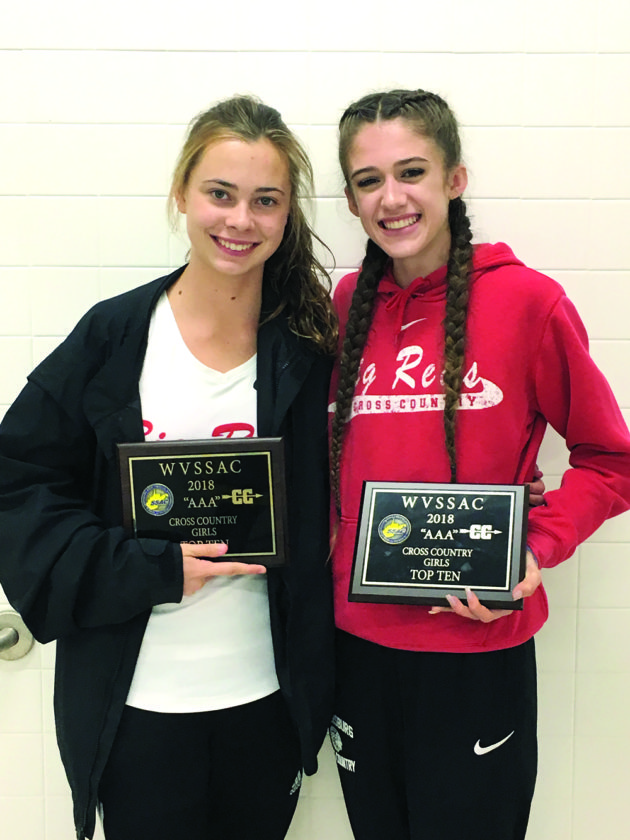 The Big Red junior already had a pair of top-10 all-state finishes to her resume, but with defending champion Tori Starcher of Ripley going down during the race, Trippett turned in a winning effort of 18 minutes flat to easily top University runner-up Zoe Shetty (18:24).

“It was just amazing,” Trippett said of the race. “I’m so glad Olivia was all-state with me.”

“I had no idea what the result would be but I’m just so excited about it,” added Trippett, who finished last fall with a time of 18:50. “The course was pretty messy and we ran the last race. I was in a lot better shape this year and a lot more training went into preparation.”

Trippett continued, “I felt really good today. My spirits were really high and I knew I had the opportunity to have a really good race. She (Starcher) went out and normally she pulls pretty far away from me early on.

“But I try to keep in contact. I mean, we had about, we were about three-fourths of a mile left and I passed her and then I didn’t know she went down until I already had finished. It’s just an incredible feeling and it just doesn’t even seem real.”

Parkersburg South senior Abby Herring had the other best local finish, placing 12th overall with a time of 20 minutes and 2 seconds.

Parkersburg’s boys finished sixth as a team and were led by the top five of Keegan Barnette (18th), Franklin Angelos (23rd), Anthony Bradford (27th), Benjamin Lake (38th) and Dustin Graham (63rd) along with No. 6 and No. 7 runners Logan Woodburn (73rd) and Logan Bock (78th).

“They ran well,” said Big Red head coach Larry Games of his squad. “Benjamin, he’s had some knee issues and that came up again and he didn’t have a good race. The rest of them ran pretty well. The boys didn’t run as great as the girls, but they ran a solid race.”

Games also said he was unaware of what happened to Starcher.

“It’s a shame because it was such a good race going on at the time,” added the coach, who noted the senior Schumacher competed for the fourth time at the state meet. “Olivia was all-state three of those years and would’ve been all-state all four of those years. She was in second when she collapsed two years ago.

“I’m really proud of those two. Madison had a great race. Her time is really impressive when you consider the conditions and how muddy it was. She ran one heckuva race.”

The Viking girls finished seventh as a team and were paced by Tori Fisher’s 23rd-place effort after she finished in 20 minutes and 53 seconds.