South netters down PHS for first time in five years 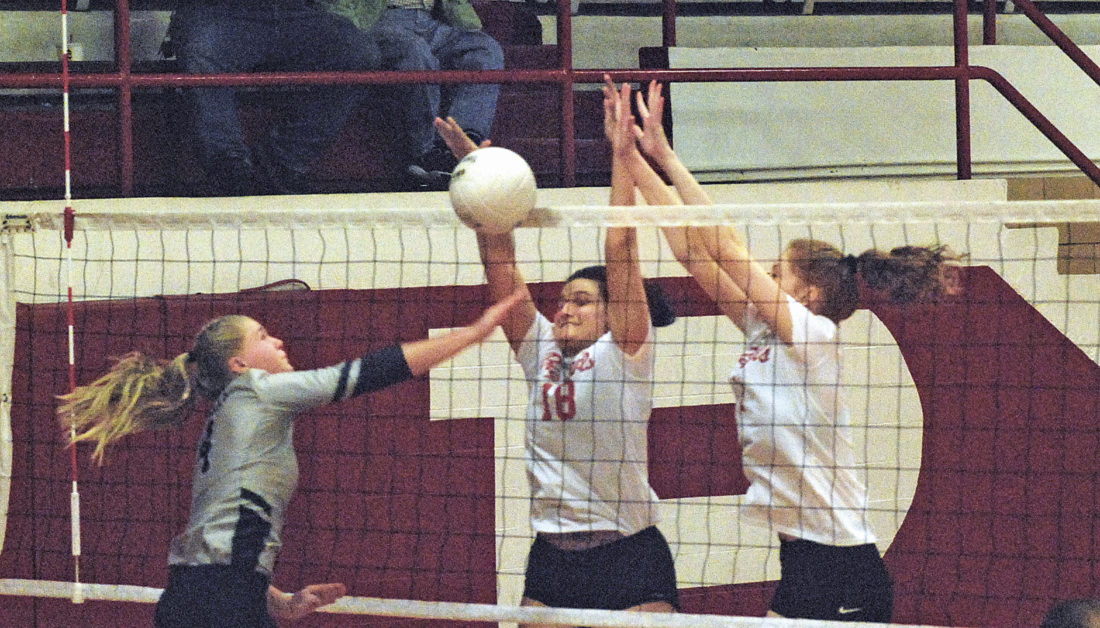 Photo by Jay W. Bennett Ritchie County’s Kayla Holbrook tries to spike the ball past the double block of Parkersburg’s Hannah Hewitt, left, and Janna Spencer during a quad on Tuesday inside Memorial Fieldhouse.

PARKERSBURG — Jacqui Foggin’s kill put Parkersburg South ahead for good in the third set against rival Parkersburg here Tuesday night inside Memorial Fieldhouse and Cassie Fink served for the final eight points as the Patriots knocked off the Big Reds 23-25, 25-22 and 25-15 to put the finishing touches on a quadrangular volleyball sweep.

Head coach Becky Bennett’s Patriots, now 10-5-2 with a road trip set for Thursday in a tri at St. Albans, defeated the Big Reds for the first time in five years.

“It was so amazing and we wanted that one so bad tonight, oh my goodness,” said Fink, who had a dozen kills and seven digs while McKayla Kemp registered 10 downed spikes and Foggin seven. “I can’t even put it into words.

“Going into the third set we really just focused on staying and finishing like how we did the second set. We wanted to just keep our energy going. We wanted it so bad. I’m still shaking in my legs.”

PHS, which had two service errors in the third set, never led in the finale. A kill by Hannah Hewitt had it even at one. Service tallies by Shay-Lee Kirby and Janna Yost tied set three at seven-all and 10-all, respectively. Grace West’s kill tied it for the last time at 11-all before Foggin smoked a kill from one of Rylee Harris’ match-high 14 assists.

When asked what the message was going into the final set against PHS coach Bennett replied, “stay together, be aggressive and play our game. We control the ball. We don’t let them make us make mistakes. We make them make mistakes.”

The Big Reds, who will join the Vikings on Saturday at Cabell Midland’s Invitational, knocked off the Jackson County program 25-15 and 25-18 while also defeating the Rebels 28-26 and 25-19. RCHS won its match against the Vikings 25-18 and 25-20 with the help of 16 assists from Bri Jones and a combined 18 kills from Abi Haught (eight), Haidyn DePinho (five), Andrea Kirk (three) and Kenda Osborne (two).

“I was missing two tonight, Hannah Adkins and Khylan Plants,” admitted PHS head coach Erin Thorpe. “We were out two defensive players this evening. We struggled a little bit defensively (against South), but I think it came down to the better team won tonight.

“South’s offense looked amazing and we didn’t go back at them. They looked really good tonight. We haven’t had one practice yet all year with everyone healthy. We’re still young and throwing in my backup backups defensively, they did a good job tonight. Every loss gets us better.”

Ripley’s only lead against the Big Reds came at 10-9 in set two as Ella Casto strung together four straight service points with the final coming via a Katlyn Sarver kill thanks to a Maddie Fields assist.

Kristen Lowers’ downed spike from a Shelby Roberts set made it 16-12, but an ace by Viking Taylor Johnson kept things close at 16-14. Despite getting within one at 17-16 with Haylee Casto toeing the service line, the Big Reds were too much. West had a trio of aces in a late run and match point came when Maggie Sauers got an assist thanks to a Janna Spencer kill.

Trailing 22-17 against PHS in the first set, Ritchie County’s Kayla Holbrook recorded an ace and the Rebels eventually tied things at 25-all when Kirk put one to the floor. However, the Rebels passed a free ball out of play and then lost the set when Spencer got a kill.

Ashley Davis got a service tally for the Rebels in set two to make it 15-14 after Kirby was denied a potential kill thanks to an Osborne/Kirk double block, but Ritchie County couldn’t get any closer. Yost served for the final four points.