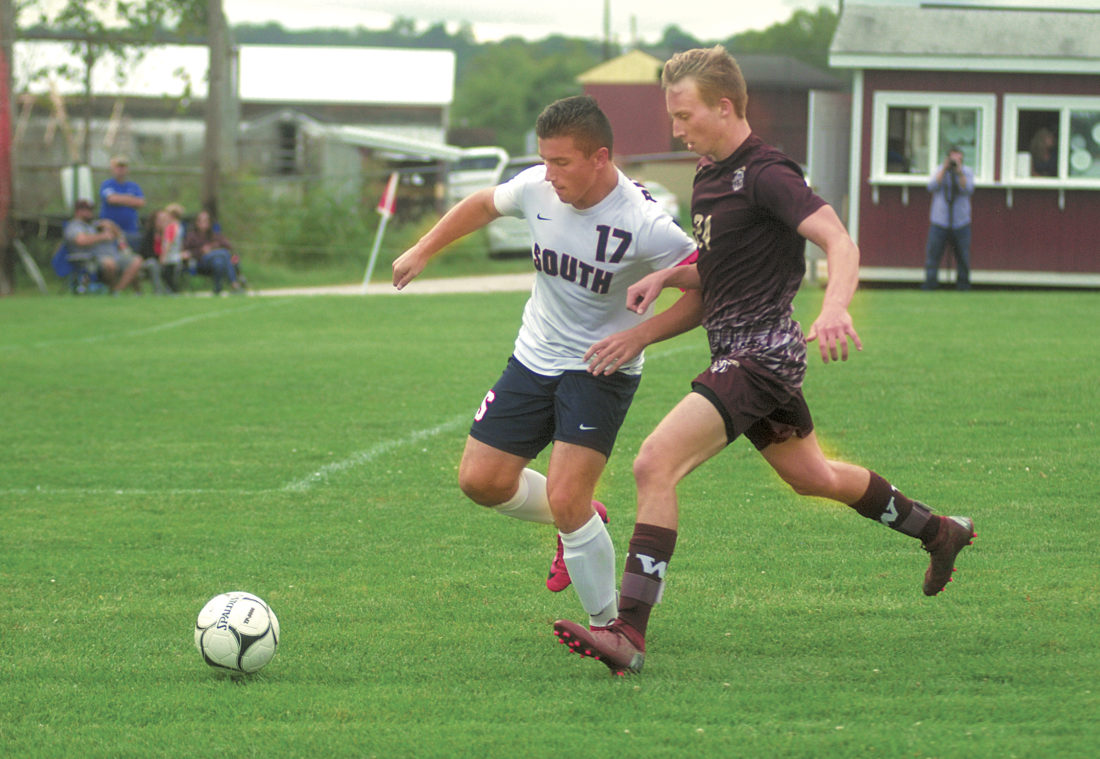 Photo by Dominic Catacora South senior defender Clay Burrows (17) and Williamstown senior forward Boston Caruthers (24) fight for the ball on South’s side of the field in the first half.

WILLIAMSTOWN–The Yellowjackets’ boys soccer team took home a hard fought win against Class AAA Parkersburg South, 2-0, Tuesday. The Patriots, who host another Class A team Tyler Consolidated at 5 p.m. Wednesday, brought a lot of early pressure on the ‘Jackets side. Williamstown shut down early runs made by South strikers and gained control for a solid portion of the first half. Around the 10 minute mark, Boston Caruthers, Williamstown’s senior starting striker, took a Gavin Bosgraf pass and sped past the Patriots’ defense and took a shot on goal making the score 1-0. Bosgraf was credited with the assist. “It was a really good through ball.” said Caruthers. “I just got a touch pass and finished.” Caruthers didn’t stop positioning himself in attempting to take the ball to the goal. Six minutes after his first goal, he received a cross pass from sophomore midfielder Garrett Hill. Upon receiving the cross, Caruthers successfully found the back of the net again. “My second goal was from Garrett Hill and it was just a really good cross.” said Caruthers. “We’ve been working on our corner kicks a lot so it was a really good to get one of those.” The Patriots side continued breakthrough attempts but the Williamstown defense held strong in the first half. With 17:38 left in the first half, South’s sophomore starting striker Evan Rose went down hard and the game was called to a halt. “After contact with an opposing player he fell to the ground and broke his left collar bone.” said assistant coach Eric Stump. “We didn’t do well after that. Whether it was emotional shock or whatever. In fact, based on what I’ve seen with collar bones he’s [Rose] not likely to be back to play this season.” The game eventually started back up with no additional goals were added to the board before halftime. This wasn’t for lack of trying by both sides. South had five shots on goal and Williamstown had 10. Stump’s team continued the attacking pressure out of the locker room in the second half. South made many attempts to break through the defense on in their opponents’ zone but in the end the Patriots were unable to make up for their efforts. At the end of the second half, South had seven shots on goal with three corner kicks versus Williamstown’s six shots with a corner. When the final whistle came it was the early goals made by Caruthers that helped Williamstown, back in action when Parkersburg Catholic comes to town at 5 p.m. Wednesday, hold on to the victory. Williamstown boys 2, Parkersburg South 0 Williamstown scoring: Boston Caruthers 2; Assists: Gavin Bosgraf 1, Garrett Hill 1 Keeper saves: W 5 (Cole Hodges), PS 10 (Chase Hawkins) Next matches: Parkersburg Catholic at Williamstown, 5 p.m.; Parkersburg South at Tyler Consolidated, 5 p.m.