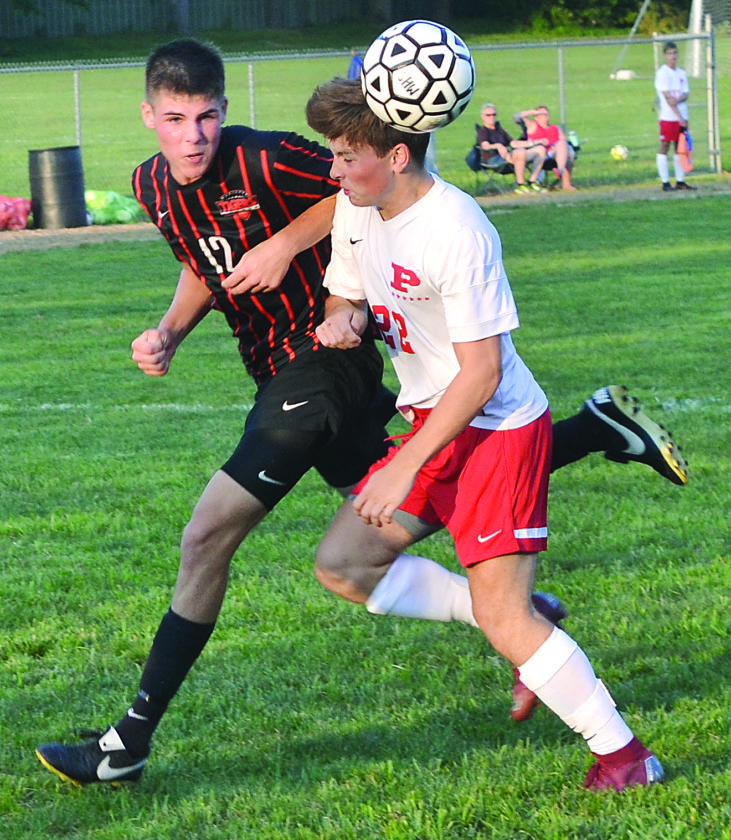 DEVOLA, Ohio — Marietta High was 2 minutes and 19 seconds away from a win on the pitch.

But it was at that time on the clock that Parkersburg High senior captain Isaiah Owen booted home the equalizer, and the two cross river rivals ended up tying 2-2 in boys’ soccer action at Jerry Brock Field Saturday night.

“Hank Hines tried to shoot it, missed it a little bit, and it fell right down to me — and I finished it,” said Owen of his second goal of the match. “I had to make sure it went in, so I did it with power.”

“We actually scored a goal,” smiled veteran Parkersburg head coach Don Fosselman, whose Big Red booters were goal-less and winless in its first three games of the season.

“Marietta is a great possession team, and we actually came from behind and tied it up 2-2. This feels like a win. It really does. This was fun. The kids needed this in the worst way. Tying Marietta was huge for us.”

Marietta got goals from junior Ryan Mannix and junior captain Jake Craven. Sean Fournier and Craven each had an assist.

“It’s frustrating,” said MHS boss Todd Morris, whose Tigers stayed unbeaten at 1-0-1. “But it’s better than a loss. We’re still a young team with one senior. So, we’re still trying to figure out how to win, too.

“Give Parkersburg credit. They kept battling, because we really controlled things, I thought, in the second half. We just couldn’t get that third goal.

“(Jacob) McKnight, their goalkeeper was outstanding. He made a couple of great saves in the first half and a couple of good ones in the second half to keep them (Big Reds) in the game.”

McNight, a senior cap, finished with 15 saves, while his Tiger counterpart Justin Labarre, a junior, had 11.

Owen staked the Big Reds to a 1-0 advantage in the seventh minute of play when he put the finishing touch on junior Sam Potts’ left cross.

But Marietta came back in the 23rd minute when Mannix headed home Craven’s left-side cross past McKnight and just inside the left post. On the play, Mannix had to elude PHS defender Jamie Couch.

In the 58th minute, MHS went on the attack with Fournier surging up the middle, and delivering a nice, ground pass to Craven in the box. Craven was greeted by McKnight but had already left-footed the ball past the keeper and into the back of the net, making it 2-1.

Marietta then appeared to have the upperhand for the rest of the second half until Owen was Mr. Clutch with a little over two minutes remaining.

“We played against one of the best teams in West Virginia,” Craven said. “A bunch of my close friends are on that Parkersburg team, and you can’t be disappointed with a hard-fought game like that.

“It was definitely the best game we’ve played all season.”

Added Morris, “The effort was great. We played well. But sometimes the game can be cruel. Parkersburg’s a good, quality opponent, and we can build off of this.”