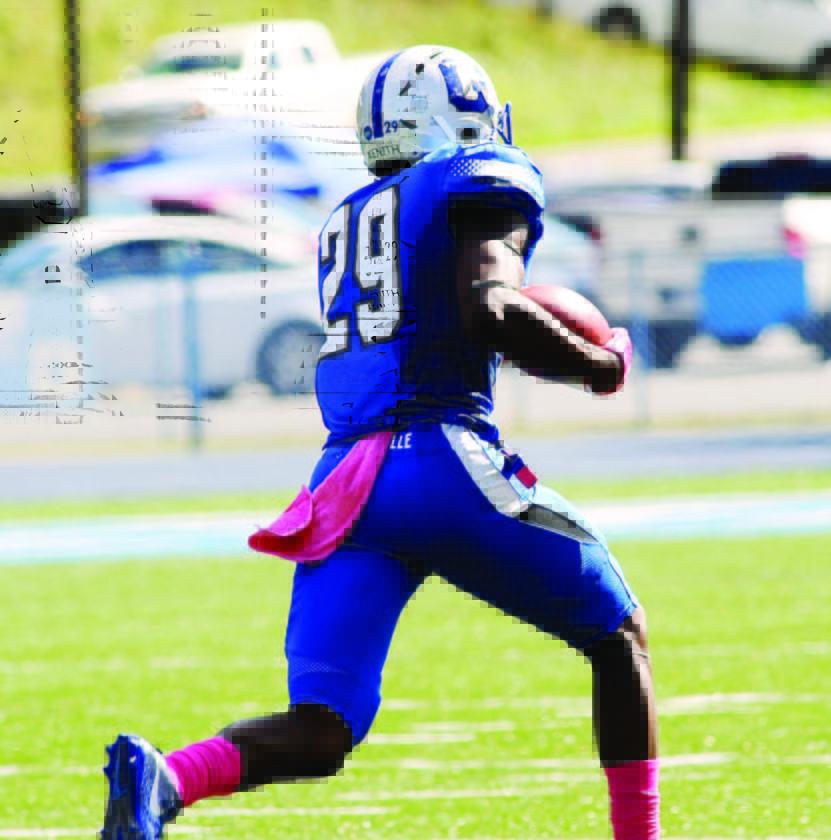 GLENVILLE — Known simply as “Tay” to most everyone, Glenville State College defensive back Quintavius Twine is hoping to make the best of his final campaign for the Pioneers of head coach Eric Smith.

Once on campus, he quickly found himself being a contributing member for the Pioneers and is now ready for a slight position change this season.

“I’ve played the strong safety for three years and now I’m at the free safety,” said Twine, who could’ve graduated this semester with his degree in exercise science if he had chosen to.

“I’m going to go back to Georgia and intern there or intern with the strength and conditioning coach here. My older brother is a personal trainer.”

Following one semester at EKU, Twine left school, went home and eventually made his way to GSC.

“When I told the coach at Eastern Kentucky I was transferring, I didn’t know what school I was going to right off the bat,” Twine admitted. “Then coach (Blake) Tasker and coach Smith started calling me.”

Of course, coach Smith — now in year two as the head coach of the G-men — was more than happy to land an athlete like Twine and he’s produced every season as a member of the Pioneers.

“He’s going to be a weak safety, our bandit spot. Last year he played free safety, but we moved him to our weak safety,” coach Smith noted. “He’ll lead our secondary.”

Following a rough start to the 2017 campaign, GSC managed to rally and win four games, but came up short in seven other contests. That didn’t sit well with Twine or his teammates.

“As a team, we dealt with a lot starting off before the first game,” Twine admitted of 2017. “We were a young team. They came out and they performed well, we just couldn’t close in the fourth quarter. As the spring came around, literally all the freshmen, they aren’t freshmen now, they are sophomores; and they were practicing like they have a chip on their shoulder and having something to prove.

“The upperclassmen did too and we felt like the season should’ve went a different way. We hit the ground running and from the first practice the upperclassmen were out there busting our butt and practicing how we did in the spring.”

Glenville State has less than two weeks to continue preparation for its season opener at 7 p.m. on Thursday, Aug. 30 at UVa-Wise.

“Small things, jumping offside and things like that and alignment. That’s one thing we should be able to work,” Twine said of areas the defense is trying to shore up in preseason camp. “As far as talent-wise, we have a lot of talent on defense.

“Our defense has a chance to be real good this year. We just have to make sure we get the discipline part down.”

Twine said he appreciated the help of all the coaches who supported him during and after his transition to Glenville State and he’s planning on leaving everything he’s got on the field to make the Pioneers have a successful campaign.

“We want to dominate on the field and in the classroom and in the community,” he said. “We’re just trying to stay focused.