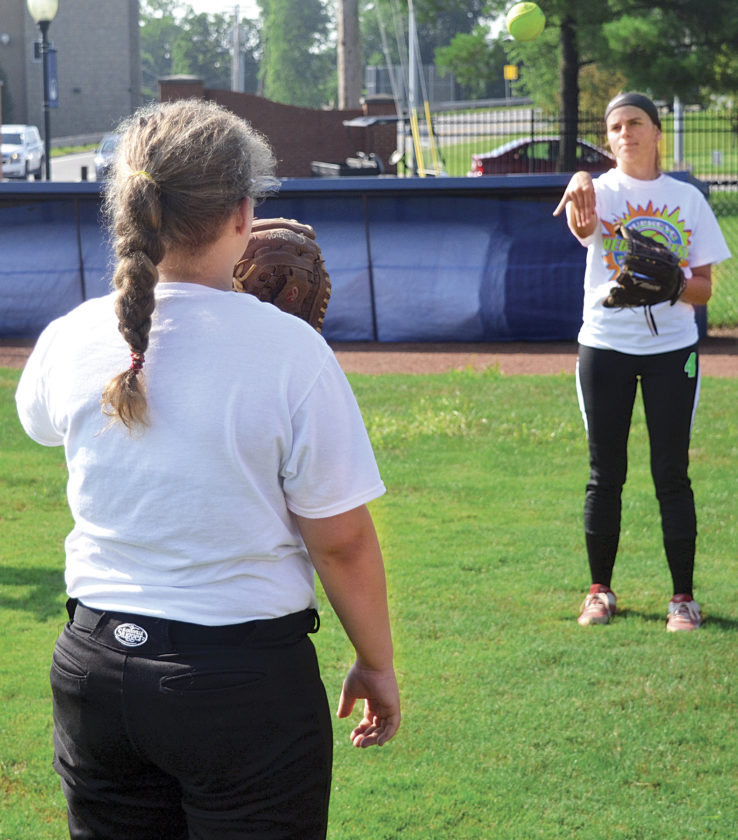 MARIETTA – Kenzie Riddle was Parkersburg High’s workhorse in the circle this past spring.

“I was the only pitcher,” said the Big Reds hurler before the start of the last day of the Marietta College Softball camp at Marietta Field Tuesday morning. The two-day clinic kicked off at 9 a.m. Monday.

“We (Big Reds) finished 14-15, I think,” said the 16-year-old Riddle, who will be a junior at PHS this upcoming school semester. (Riddle was looking forward to celebrating her 17th birthday Wednesday.)

The right-handed-throwing Riddle was at the MC camp for the first time, because she wanted to get better.

“I throw about four or five different pitches,” she said. “And, I’d like to play at the college level some day.”

Dany Dimmerling, also a newcomer to the camp, was a middle infielder in the spring for the Shenandoah Zeps in Noble County.

“I’m kind of focused on second base,” said the 18-year-old senior. “That’s where I play most of the time — and I’ve learned a lot here and I’m having a lot of fun.”

Brianna Finck said that the day camp included “about 40” girls from grades four through 12..

“We have some girls from Columbus and a couple from Cleveland. We have about eight or nine high schoolers, and that’s pretty good.”

“Everybody’s who’s been here has been super helpful,” Finck said. “They all know what they’re doing. And the girls seem to be having a good time.”

“We have stations at every area,” she continued. “We do hitting, agilities, mental aspects of the game and all that stuff.

“We’re focusing on the fundamentals. I mean, that’s the most important part of the game. If you don’t do things the right way, you’re not going to be successful. So, we try to teach balance, the right hitting form, the right way to throw, and all types of things like that.”

Finck said she was looking forward to working with the outfielders on the last day.

“I’m excited, because I played center when I was a player at Mariette (College),” she said.

A scrimmage at the camp was scheduled in the afternoon.

“I think the girls will have fun when we do that,” Finck said.