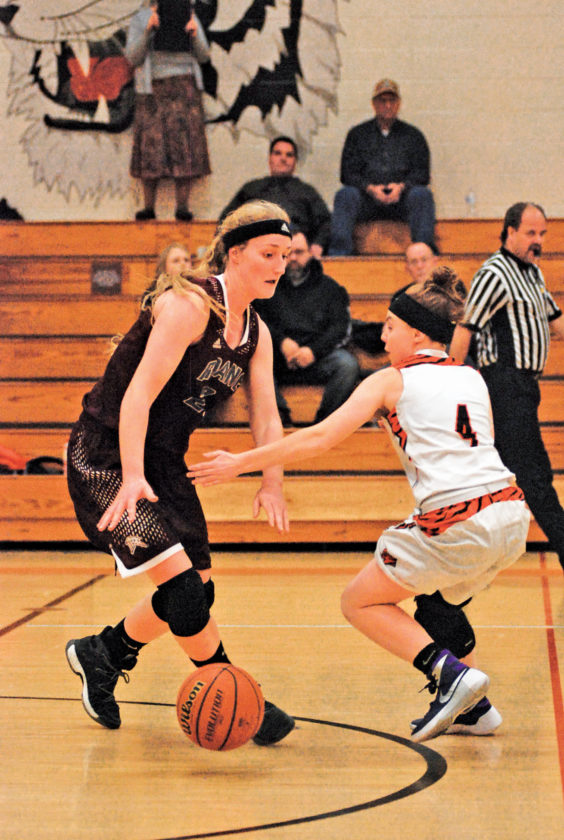 Roane County’s Lucille Westfall, pictured here working a crossover on Wirt County’s Sydney Woods, posted a monster double-double of 24 points and 20 rebounds Friday night in Elizabeth to help lead the Raiders to a 76-52 victory against the Tigers. Photo by Jay W. Bennett.

The Tigers (0-2) of first-year head coach Mike Hughes shot just 25.8 percent (16 of 62) from the floor and that included missing 10 of 11 shots in the opening eight minutes and finishing the first half just 7 of 30, which helped the Raiders forge a 49-23 cushion at intermission.

Westfall showed off her game by continually hitting mid-range jumpers and entered halftime with 16 points. She finished with game-highs of 24 points, 20 rebounds, four steals and two blocks. She also dished out a team-high four assists.

“She will probably be the best individual player we play all year,” admitted coach Hughes, whose squad returns to action with a varsity only affair Tuesday at Ravenswood.

“She hits it from anywhere. How can you stop that? You just can’t. She did real well. We just have to keep shooting and they will eventually fall for us I hope.”

Westfall was coming off a 30 point, 12 rebound effort in a season-opening road loss at Ravenswood, which saw Raider guards Danielle Godbey and Olivia Mace go— scoreless.

However, Godbey finished with 12 points and Mace added six against the Tigers. Starter Abby Bode knocked down a pair of 3s en route to eight points for the Raiders of head man Frank Farrar, who also got six markers apiece from Halle Farmer and Silken Harlan as well as eight counters by Kim Waggoner.

Godbey’s foul shot just 21 ticks into the game put the Raiders ahead for good. Following a trifecta, a foul shot and a deuce by Mace, Godbey got a putback and then scored again for an 11-0 lead at 4:50 of the first. Westfall then had a steal and canned a 12-foot pull-up jumper to make it 13-0. Wirt County’s Cori Hughes, who had 23 points, finally got the orange and black on the board when she canned a corner 3 from a Taylor Anderson assist.

Westfall answered that with a three-point play and then a short jumper. When Kristen Blosser scored from a Harlan feed the Tigers trailed 23-5. A Hughes foul shot closed the first quarter scoring, but the Tigers faced a 27-6 deficit.

Another triple by Hughes and a three-point play from Caitlin Cottrell, who scored a dozen, made it 32-12 with 4:59 left in the half.

The Raiders, who return to action next Friday at Webster County, pushed the advantage to 31 twice prior to the break. Morgan Wagner, who finished with seven points and a team-high 10 caroms, made 1 of 2 from the charity stripe with no time left on the clock to close the gap to 26 at halftime.

Wirt County outpointed the Raiders 16-11 in the third quarter and trailed 53-31 at the 4:35 mark after Loden Campbell drained a 3-pointer. She finished with 10 points and nine rebounds. However, Emily Hunt answered that bomb with a triple of her own as the visitors still led 60-39 entering the final eight minutes.