St. Marys’ running back Braden Barnhart finds running room for a big gain on a drive early in the first quarter.

St. Marys’ head man Jodi Mote and senior Jacob Northrop share a moment after winning the first state championship in the history of the school. 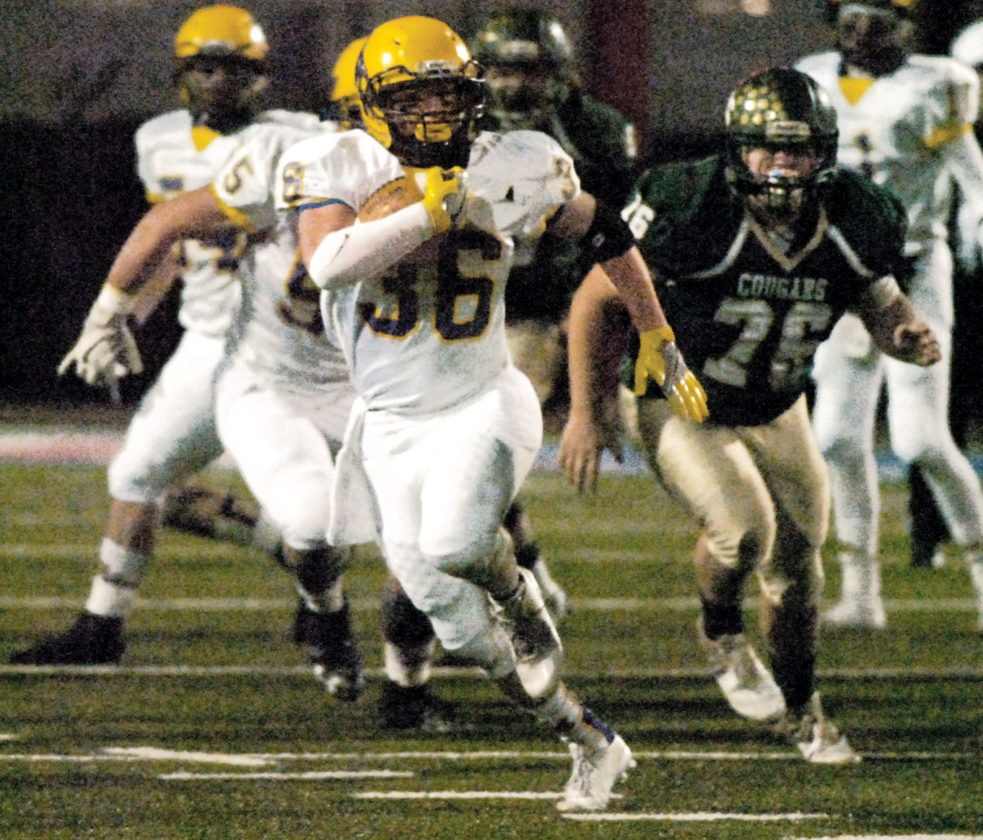 St. Marys' running back Braden Barnhart finds running room for a big gain on a drive early in the first quarter.

Those words uttered by St. Marys’ icon Bill Hanlin after a Blue Devils’ win echoed throughout the visitors locker room after the Pleasants County squad claimed the first state football championship in the history of the school Saturday night at Wheeling Island Stadium. The No. 2 Blue Devils downed top-seeded and undefeated East Hardy, 23-8, to make history.

The win also finished off a perfect 14-0 season for Class A St. Marys.

“It is just unbelievable,” said purple and gold quarterback and defensive back Will Billeter. “This is what my teammates and I have wanted ever since we were in peewee and here we are. I know my dream was to be the first team ever to do it and here we are.”

“Words can’t describe my feelings,” said head coach Jodi Mote. “I thank God I am even able to be here with these kids and this staff. I thank God for our community and that we have been able to bring something home for them. It is a feeling I am never going to be able to describe. 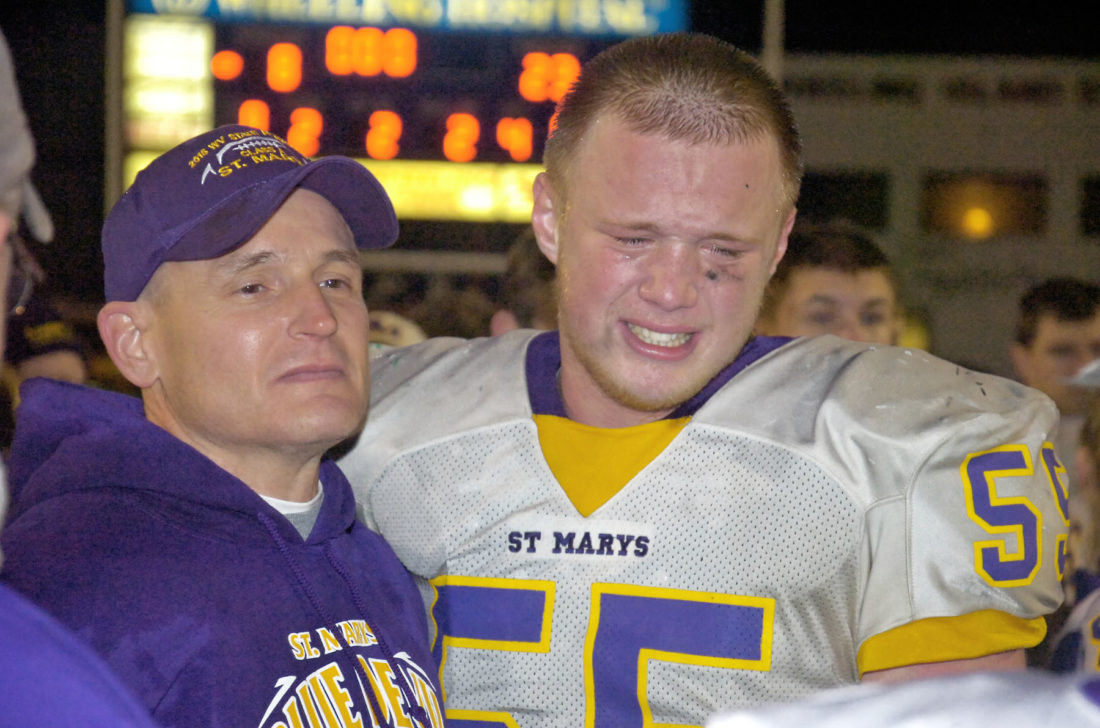 St. Marys' head man Jodi Mote and senior Jacob Northrop share a moment after winning the first state championship in the history of the school.

“This team is state champions. And I think it made it special because they did it as a team and I will remember them forever.”

Neither team scored in the opening period. The score remained tied for most of the second until Billeter found the end zone from 1 yard out with 2:58 left in the half to go up 6-0. Georg Krogh’s kick one play later set the score at 7-0.

Billeter had several key plays on the night on both offense and defense. In addition to his rushing score, the senior also found Dylan Gray from 2 yards out with 3:17 left in the game to seal the deal. Defensively, he picked off two passes and almost had a third. The first-year defensive back had the tall task of guarding East Hardy’s top receiver in Brett Tharp, but he didn’t shy away from the job. Tharp was limited to four catches and 93 yards on the night, but it would have been more without Billeter occassionally breaking up a pass.

Mote and company went up 14-0 at 7:44 in the third quarter when Jaiden Smith ran the ball in from 15 yards out. Smith, a junior, was named Player of the Game after finishing the night with 125 yards on 18 carries and several big tackles on defense.

East Hardy’s only points came after Mote and company went for a perplexing 4th-and-1 at its own 10-yard line. Running back Phillip Mullin powered his way to paydirt from 6 yards out to cut the lead to eight. One Clay Skovron successful run on the try a play later cut the deficit to six.

The Cougars’ all-state quarterback Corey McDonald did not have a great evening. The senior finished his career with an 8-of-22 performance for 162 yards and two picks.

“I give all the credit in the world to East Hardy; they are a very good ball club,” said St. Marys’ defensive coordinator Jay Powell. “For our kids to do what they did is special to be honest with you and that doesn’t even do it justice. They got enough of a pass rush to make him (McDonald) feel uncomfortable. They may have rolled up some yards on us, but our defense bent but didn’t break all night long.”

Even when McDonald did have time to set his feet and throw, his receivers usually had a St. Marys’ defender within a few feet of them and couldn’t bring the ball in.

For coach Chad Williams and his Cougars, the loss was a tough pill to swallow, especially after last years’ 62-0 beatdown from Magnolia in the same game.

All of Pleasants County was on hand to see the Blue Devils accomplish the feat. The team and its supporters celebrated in the wee hours of Sunday morning at St. Marys’ Bill Hanlin Field.