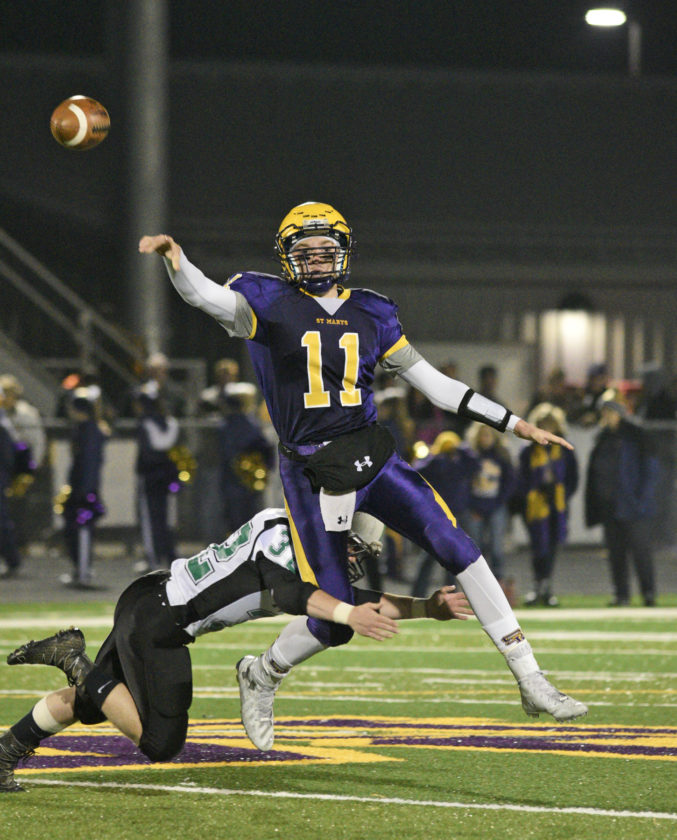 St. Marys’ Will Billeter makes a pass while getting tackled by a Fayetteville player during the Class A football playoffs Friday at Bill Hanlin Stadium. Photo by Jeff Baughan.

PARKERSBURG — After 13 weeks of grueling gridiron action and three more hard-fought games of the postseason, the three classes of West Virginia High School football are ready to declare champions this weekend during the Super Six at Wheeling Island Stadium.

“It is a remarkable accomplishment just to say you have made it to this point,” said St. Marys head coach Jodi Mote. “So many things have to go right and you have to have a special group of kids and get some lucky bounces.”

Football related activities begin at 8 a.m. Friday when the West Virginia Sports Writers Association convenes behind closed doors at the Wheeling Island Casino to hammer out the three all-state football lists. The job will take about six hours with plenty of debates and arguments to be had over the most deserving kids in each class.

Finally, the first of the three main events will kick off at 7 p.m. Friday when No. 5 Fairmont Senior and No. 2 Mingo Central meet to determine the Class AA championship. There will be a new champion in the middle classification this year after the Polar Bears converted a gutsy two-point conversion in double overtime to topple three-time defending champion Bridgeport, 22-21. The victory over the Indians was the first for Fairmont Senior since 2006.

“It was an outstanding game and came down to the wire in double overtime,” said Fairmont Senior head coach J.L. Abbott, whose son Jake scored the game-winning conversion against Bridgeport. “I was proud of our kids and how they fought through all of the adversity throughout the night. They hung in there and found a way to win.”

Fairmont Senior’s opponent in the championship game, Mingo Central, had a little bit of an easier time in its matchup against No. 6 James Monroe. Though the Mavericks fought hard through the opening half, Yogi Kinder and his Miners pulled away in the closing periods for a 41-21 win. The victory moved Kinder’s squad to 13-0 on the season.

“Both teams are similar offensively and defensively,” said Kinder, when asked about the matchup against the Polar Bears in the finals. “It is going to be a good football game. They have some really good kids and so do we.”

Class AAA will have the spotlight to itself at noon Saturday when No. 1 Martinsburg (13-0) and No. 2 Spring Valley (12-1) clash for supremacy.

Dave Walker’s Bulldogs come into the game sporting a goose egg in the points-allowed column through the first three games of the postseason.

“Our defense has played really well and you want them to during this time of the year,” said Walker. “Spring Valley is a team we haven’t seen this year and is a really good ball club. But we aren’t worried about them; we are going to focus on us and what we can do. We know the Timberwolves are going to play hard and be well coached. Of course, our kids are going to play well, too, or they better.”

The orange and black’s opponent in the top-ranked classification in West Virginia — Spring Valley — needed a goal-line stand on 4th-and-1 against Capital and then a 99-yard drive with 30 seconds left to advance to Wheeling.

“Honestly, I was thinking about playing for a field goal,” said the Timberwolves’ head man Brad Dingess. “But we moved the ball very well and Derek Johnson is just so fast and we got him on that out route and tried to get him to the sideline but he found his way to the end zone which worked just fine for me.”

Closing in on primetime will be the Class A title game featuring two teams with a combined record of 26-0 at 7 p.m. Saturday. Top-ranked East Hardy (13-0) and head coach Chad Williams are making the trip to Wheeling for the second straight year and are looking to get the bad taste out of their mouths of a 62-0 loss to Magnolia a year ago.

“This was our goal from the time we walked off the field in Wheeling last season,” said Williams. “The boys worked hard in the weight room and set a team goal of getting back to The Island to finish the job this year. Our 7-on-7’s all summer were great, our attendance at workouts was great and they have been just phenomenal all year the way they have showed up to practice.

“The first time us as a coaching staff really saw the difference was the regular season win over Pendleton County. We jumped up on them 27-0 at halftime and I am not sure people really knew how good Pendleton was but I was thinking ‘this is a top 5 team and here we are sticking it to them,’ and I think that game really gave us a lot of momentum.”

Pendleton County popped up on the Cougars’ schedule a second time this season last Saturday in the semifinals. This time, the Wildcats played tight through halftime and trailed just 21-14 coming out of the locker room. However, Williams and company pulled away in the second half and advanced with a 48-20 win.

Lining up on the other side of the field from the Cougars will be No. 2 seed St. Marys (13-0). Mote and company will meet East Hardy for the second straight year in the playoffs after falling to the Cougars in the semifinals last season.

St. Marys has bulldozed its way through its first three opponents in the playoffs, allowing just a single score in the opening round. Perhaps even more impressively, the Blue Devils shut out their last two opponents in undefeated Gilmer County and Fayetteville.

“I am so proud of our kids and the way they have bought into our system this year,” said Mote. “We had a lot of talent coming back and instead of chasing individual numbers our boys have really taken a hold of the team concept and run away with it to get us to where we are now. This is really a special group of kids and I will always remember them whatever happens Saturday.”

All three games will be televised live on ROOT Sports.