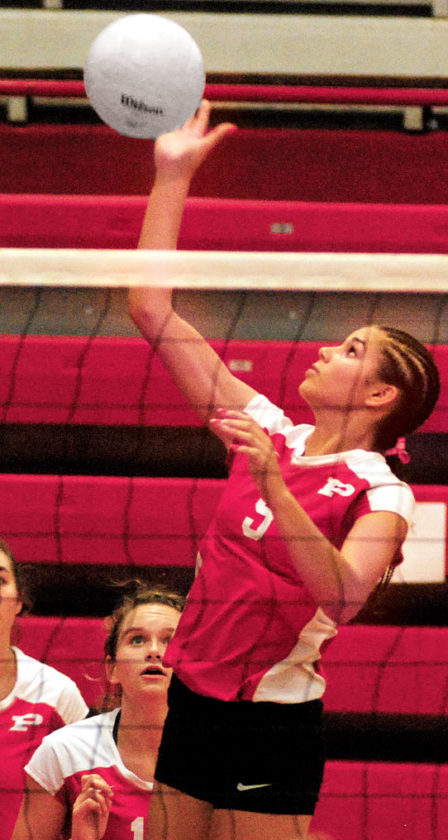 Parkersburg’s Shay-Lee Kirby prepares to hit the ball during a regular season match earlier this season. Kirby was named to the West Virginia Class AAA All-State first team Saturday as voted on by the West Virginia Sportswriters Association. Photo by Jay W. Bennett

CHARLESTON – It takes more than two players to make a standout high school volleyball team. Musselman coach Shawn Martz has a duo whose complementary skills and personalities helped propel his team to yet another state championship.

In Fritts, a repeat first-team pick, and Gray, a second-team pick last season, Martz said the team enjoyed a great combination of youth and experience, passion and steadiness. With that, Musselman won its fifth state title.

“Lexi, she was always the kid you trust in the big moments,” he said. “She’s very steady in just about every skill aspect. It’s almost like fire and ice. Jaden brings the fire to our team. She’s really vocal. She brings the eye-popping, dynamic offensive plays. Lexi is just solid in every phase of the game. She’s got ice in her veins when the big moments occur.”

GW coach Missy Smith said her duo’s work ethic was as important, if not more important, than their talent.

“The thing about both of them is that they’re very hard workers,” Smith said. “And before they ask any of their teammates to raise their game, they both step their games up to help us win. They don’t just talk. They lead by example.”

Cole finshed with 742 assists, 16 aces and was a 98.7 percent server in helping the Timberwolves reach the state quarterfinals. Kirby finished with 384 kills, 32 aces and 113 total blocks (31 solo), and the Big Reds also enjoyed a state quarterfinal berth.

Anderson ended with 457 digs, 72 aces, 40 assists and 692 serve-receptions, while serving at 90.6 percent. Bellomy’s dig percentage stayed consistently in the 60-to-70-percent range for her career, and in her last two years, she recorded more than 700 kills and 60 blocks.