Big Reds one win away from title shot 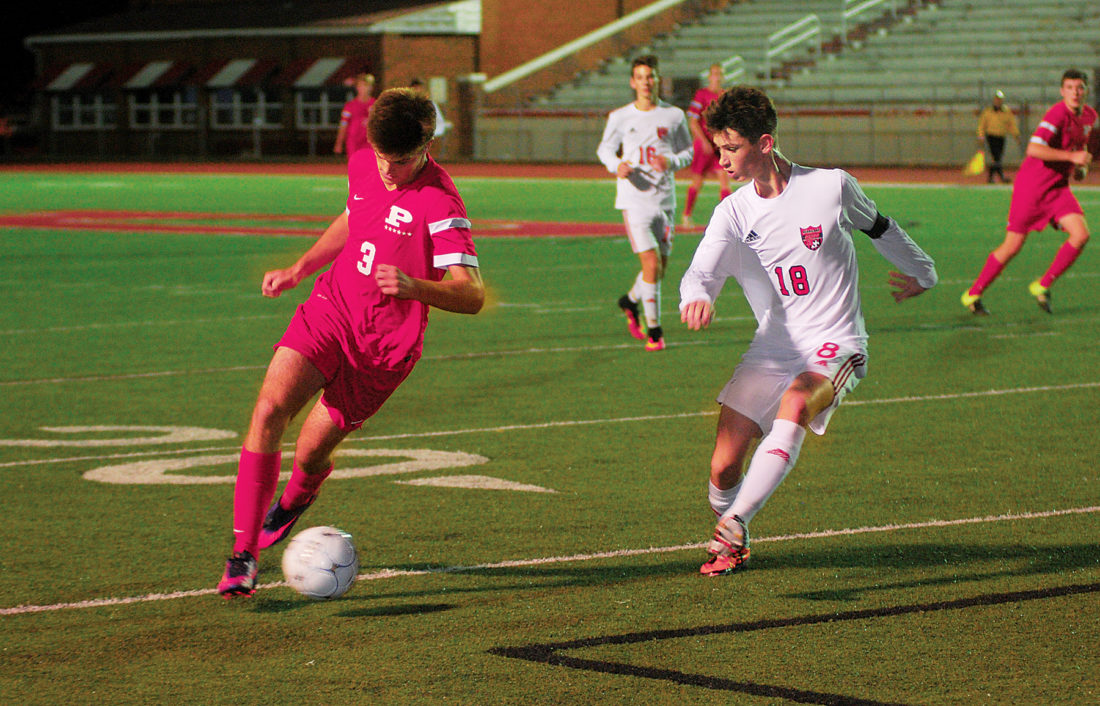 Parkersburg’s Parker Miller dribbles the ball while being guarded by a Hurricane player during the Big Reds’ 3-1 Region IV championship game victory to propel them to the state tournament. Photo by Matthew Hale.

PARKERSBURG — PHS and University will do battle for just the second time this season when the teams get together 5 p.m. Friday in a Class AAA state semifinal at Cline Field in the Paul Cline Memorial Sports Complex in Beckley. A lot more will be on the line than when the Big Reds downed the Hawks, 5-2, at Stadium Field earlier in the year.

“Getting to the state tournament was all we had on our mind this season,” said PHS standout defender Jack Johnson. “We worked really hard for this and are thankful to be in the position we are in but now we have to finish the job.”

When asked if the earlier game and win gives the Big Reds an advantage over its opponent, head coach Don Fosselman answered in the affirmative.

“It is absolutely advantageous,” said Fosselman. “We have tape on them now and got to look at what they as a team are going to try to do offensively and how they will guard us defensively. Of course the flip side of that is they have tape on us to but you can’t help that.”

The Big Reds powered their way to a 16-3-3 season while University was equally impressive at 18-3-2.

Parkersburg went through Ripley in a Region IV sectional final and then beat Hurricane in the regional final, 3-1, to advance to the state tournament. However, the Big Reds had to rally both times after falling behind 1-0 in each game.

University’s path to Beckley was even harder. The Hawks had to go through two-time defending state champion Morgantown in a sectional final before downing Wheeling Park in the regional to earn its title shot.

“I had forgotten how good a team they were until I started watching tape on them,” said Fosselman. “They (University) have a definite all-stater but the rest are really young but really good too.”

Senior middie Collin Mocyunas and sophomore forward Joseph Biafora lead the Hawks offense. Both players scored in the regional win over Wheeling Park and are a threat any time they have the ball. The pair anchored an offensive attack which scored 78 goals on the season. Mocyunas, in addition to his offense, provided valuable leadership to a team with not much experience.

Opposing the potent offense will be a Big Reds defensive unit Fosselman calls “the best four defenders in the state.” Led by Johnson, PHS has only allowed 24 goals on the season.

Along with goaltender Jacob McKnight, the unit of Johnson, Austin Lewis, Kyle Goodwin and Ian Domenick recorded seven shutouts and held opponents to a single goal eight times on the year.

Offensively, the Big Reds bring in a lethal unit led by senior striker Immanuel “Pokie” Opoku-Duah, classmate and midfielder Teddy Huston, as well as junior Parker Miller. The trio powered Parkersburg High to at least one goal in every game but two this season.

“We are going to get our shots,” said Fosselman. “Our outsiders move really well in Murad Hamurani, Nathan Burd, Anthony Bradford and David Snider and do a good job of getting the ball deep in the opposition’s offensive zone. It also doesn’t hurt Parker is about 6-2 and a freight train coming at you and that Pokie is so creative and inventive and can blow right by you if you let your guard down for a second.”

Opoku-Duah had one such goal in the regional final against Wheeling Park. The senior took a beautiful over the top pass from Teddy Huston while surrounded by three defenders and outraced them to the keeper. Once near the goal, the senior delivered a head fake to the goaltender before shooting the ball the other way.

The winner of this game moves on to the state championship game to face the winner between Region II champion Jefferson and Region III winner George Washington 30 minutes after the Class AAA girls title game at 10:45 a.m. ends on Cline Field.