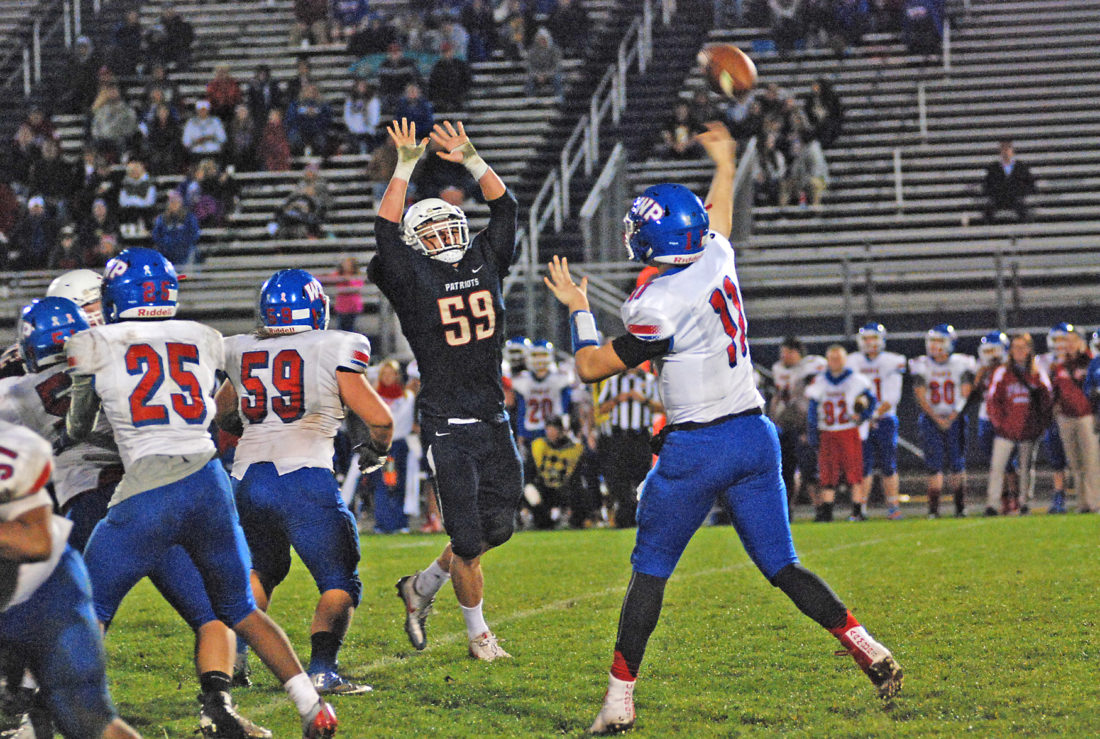 PARKERSBURG — The Parkersburg South Patriots put up a spirited effort against defending state champion Wheeling Park, but the aerial assault of the Patriots from the northern panhandle proved too much, as Park won 48-35.

Quarterback Cross Wilkinson passed for 260 yards for the reigning champs, 181 of them to wide receiver Quamaezius Mosby. South QB Brandon Hall passed for 159 yards and rushed for another 65, while Zane Hinzman compiled 116 yards for the hosts on two spectacular carries.

Wheeling Park scored on a 10-play, 63-yard drive on its first possession, keyed by a 31-yard wide receiver screen from Wilkinson to Nathan Phillips. Lorenzo Clark, who rushed for 125 yards on 25 tough carries on the evening, pounded in from 3 yards out for the early 7-0 lead.

South went to the wide receiver screen on its first play from scrimmage, and Nick Yoho burst through the blocking, not being caught until he reached the Park 20-yard line for a 61-yard gain. After a Park penalty, Hall scrambled left and weaved through the defenders for a 15-yard touchdown. Yoho added the PAT to tie the game with 6:21 remaining in the first.

The visitors were given good field position when South attempted an onside kick, and mixed run and pass well on a nine-play, 62-yard drive. Clark smashed in from 1 yard out for the 14-7 lead.

Disaster struck at the end of the next South possession. Held to a three-and-out, the punting unit came on, and with punter Yoho standing only 8 yards behind the line of scrimmage, danger loomed.

It struck when Park caved in the left side of the line, and smothered the punt. The visitors recovered inside the South 5, and took three plays to cash in; Clark took a stretch play left and found the corner for a 3-yard score.

South recovered well, and cut it to a one-score game with a lengthy drive. Hall picked up first downs with a pair of scrambles, and J.T. Kemp eventually bulled in from a yard out with 8:04 remaining in the second to make it 21-14.

Park took only one play on its next drive to re-extend the margin. Wilkinson found Mosby on a 5-yard route in the left flat, and the receiver accelerated like a Ferrari past the surrounding defenders for a 57-yard scoring jaunt. South blocked the extra point try, and trailed 27-14 with 7:44 left in the half.

After South was forced to punt, Wilkinson looked for Mosby again on a deep route down the left sideline, and found him wide open. The speedy receiver pulled the ball in in stride, and strolled into the end zone for a 45-yard TD pass.

South managed to score again before halftime. On a second-and-10 play from the home 20-yard line, Hall handed the ball to Hinzman on a counter play. He followed his blocks perfectly, broke into the secondary, and raced all the way, with the aid of a good inadvertent block from an official, for an 80-yard score. Yoho’s extra point made the halftime score 34-21.

The South special teams made another good play to keep that margin, blocking a 35-yard field goal attempt by Park’s Chase Green.

South then took the ball deep; Hinzman picked up 36 yards on the same counter play, but Hall eventually came up short on a fourth-and-2 play from the Park 23.

Park essentially wrapped things up early in the fourth. Wilkinson looked deep down the right again for Mosby, and again he found him, this time for a 61-yard touchdown.

South continued to battle. Yoho found Hunter Shank on a 33-yard completion on a fake-punt pass, and Hall eventually capped the drive, locating Yoho wide open in the right side of the end zone from 20 yards.

At 41-28, things suddenly looked possible again, but Park recovered the ensuing onside kick, and methodically drove 56 yards behind Clark’s running. Zachary Torbett finished the drive with a 5-yard run, and Park led by 20, 48-28, with only 3:45 remaining.

Tyee Gibson took a good return inside Park territory on the kickoff, and Parkersburg’s Patriots added a final score. Gibson gained 32 yards on a catch-and-run, Hall took a QB draw 19 yards to the Wheeling Park 1, and then scored his second rushing six of the evening with 1:22 left. Yoho’s kick brought the final margin to 48-35.

South returns to action next week in the annual classic with Parkersburg High school, both teams needing a win for any chance at playoff qualification. Kickoff is at 7 p.m. on Friday at Stadium Field.