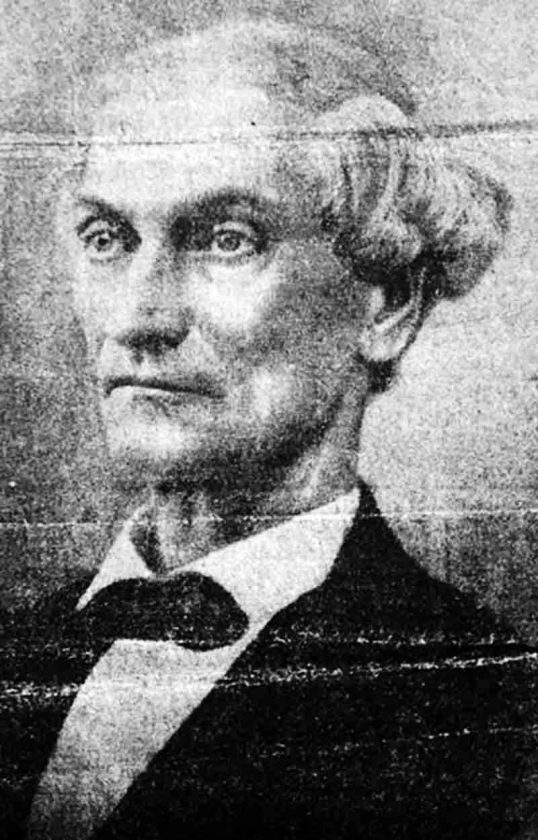 Stephen Chester Shaw came to Parkersburg in 1831. Immediate notice of his exquisite penmanship quickly led to his becoming clerk of the county court, though he was but twenty-two years of age. He later became county assessor, commissioner and surveyor, positions that made him quite familiar with all aspects of Wood County and its people, knowledge that he later used to compile a thorough accounting of Wood County history. Shaw died in 1890. (Photo from a 1931 issue of the Parkersburg News)

In a 1931 Parkersburg newspaper item, historian Minnie Kendall Lowther, using quotes from Shaw himself, shared the story of this most interesting man. Excerpts follow:

“Through the phonograph of years, let us listen to Mr. Shaw’s own story of his early years here as he told it, in some Sketches, in 1877, from ‘Leafy Glen’ [his home on Sixth Street in Parkersburg] for it is such an interesting contribution to early Parkersburg.

“Shaw speaks: ‘Forty-six years ago, the author of these Sketches, then a young man, became a permanent citizen of the town of Parkersburg, in Wood County, Virginia. At that time, Parkersburg, the seat of justice in the county, was a small town on the southern banks of the Ohio river, above and adjoining the Little Kanawha, and containing a population of about two hundred inhabitants. Up to that time and after, the territory of Wood county had remained the same as when the county was organized, embracing an area of about fourteen hundred square miles and contained a population of between six and seven thousand inhabitants.

“Since that date, by the formation of new counties from the original territory of Wood, the area has been greatly lessened, and now contains only about one-fourth of its original boundaries, and yet such has been the increase of its population, that it now contains [1877] upwards of 20-thousand inhabitants.

“Changing the form of expression from the past tense to the present, we will say that during the first seven years of our citizenship in Parkersburg, we were employed and performed the duties of clerk of the county court of Wood county, under the late James H. Neal, Esq., clerk of its Circuit Superior court. Between the years of 1845-1855, for seven years, we held the office and personally performed all the duties of assessor, and commissioner of the county. Also, during these years as surveyor, we became well acquainted with the lands of the county, in their various localities.

“Having closely and carefully studied and improved these sources of information, arising from these several positions occupied by us, we became familiar with the history of the county, its early settlements, and many of the hardy, bold and enterprising inhabitants. Also acquired a general knowledge of its lands, waters, watercourses, soil, production and natural advantages. The diversified scenery of its mountain slopes and valleys, etc. we have taken pleasure in penning these sketches, and thus complying with the oft-expressed wishes of personal friends in presenting them to the public.”

He further speaks of how time seemed long in these earlier days and of how, in review now, it seems but a step. Then continues “Yet along the way we have seen sunshine and sorrows — hours of pleasure and pain — broken shrines of affection and love are in dust at our feet — footprints upon the sands have been made and washed away — mounds covered with green grass have been moistened with tears, covering forms that cannot be effaced from the tablet of memory. In penning these pages, we have labored to bring back, and converge some of the rays of sunshine and joy, which once illuminated our pathway, and gave hope and happiness, to call back the associations of other years and other friends, and perpetuate their memories.”

Bob Enoch is president of the Wood County Historical and Preservation Society. If you have comments or questions about Look Back items, please contact him at: roberteenoch@gmail.com, or by mail at WCHPS, PO Box 565, Parkersburg, WV 26102.